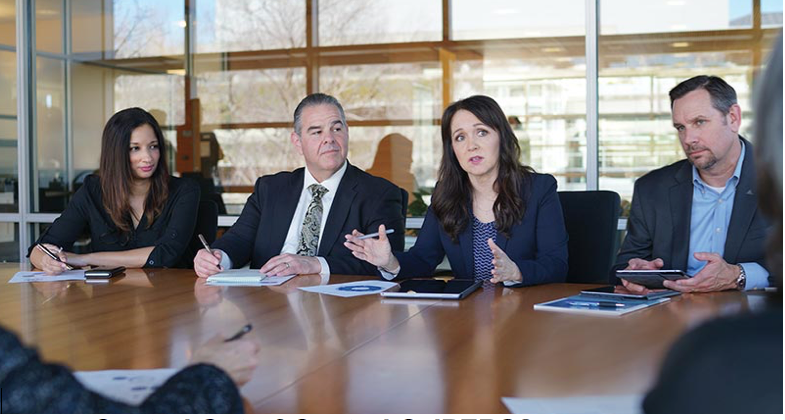 EIGHT MOST READ -  The CalPERS Board is failing to act as the fiduciaries of we the beneficiaries, when it comes to running their own organization.

Whom can we turn to for help?

Let me be succinct. CalPERS is now being run by a CEO who documentary evidence proves lied not only to CalPERS, but also her prior employer, Washington State, regarding her resume, particularly about her educational background and work history. Almost worse, the President of the CalPERS Board and some executives are trying to cover it all up.

The Misrepresentations of Marcie Frost

When former CEO Anne Stausboll suddenly decided to retire in August 2016, she engineered the hiring of inexperienced Marcie Frost (photo above, center) who was, at the time, a question mark.

Well, we now have the answers. Courtesy of a series of posts on the blog NakedCapitalism, we find that Marcie Frost not only had major misrepresentations on her employment documents, she isn’t even marginally qualified to run an organization the size and complexity of CalPERS. Wow!

I know this sounds a bit harsh, but there is undisputable proof in three recent posts by the spunky blog which started poking holes in the CalPERS private equity programs years ago and has now rooted out malfeasance in the Board room. Here is a good starting point regarding Ms. Frost.

The short version is that her work history is partially fabricated in that she has only completed high school, not the college education she creatively finessed. She graduated high school, period. If you think this makes her qualified to run the largest pension fund in the United States as it’s CEO, then I’ve got a bullet train I’d like to sell you.

Material misrepresentations on an employment application should be and are cause for discharge of any public employee, and if CalPERS beneficiaries like you and me ever lied on our employment application, the department or agency that hired us would fire us in a New York Minute. For cause.

In fact, I would love to know how her evident supporter Richard Costigan, who is the appointed representative from the California State Personnel Board, can look himself in the mirror at this set of facts. Actually, I would like to know who at the State Personnel Board appointed him as their CalPERS Board member, fiduciary duty and all, since he evidently doesn’t give a damn about the very merit system that the SPB itself is tasked with administrating. Shame.

Even more embarrassing, as the CEO of CalPERS, Marcie Frost is an at-will employee, for god’s sake. Is there a spine to be found among any of these Board members?

No Excuse for the Appointed Board Members

Out of the thirteen seats on the Board, a majority (7) are appointed, and of those, four automatically are Board members (ex officio members) of the CalPERS Board by virtue of their public offices:

The other three are:

(6) Gubernatorial Appointee (Bill Slaton) and on the Board of SMUD

For goodness sakes, these officials run the major components of the State of California on your and my behalf. If they have no interest in what happens to a $350 billion pension plan with something like 1 1/2 million beneficiaries and their families, what does that tell us about their stewardship in running the State itself?

I know Jerry Brown is termed out, but he used to be the law & order grown up in the State. Jerry, where are you? And two of these people, the DHR and SPB appointees, are charged with the administration of our statewide human resources and merit system. Do they run them as poorly as CalPERS? I hope to gosh not, or we’re all in big trouble.

I won’t even say anything about the Treasurer and Controller. Chiang is termed out, and Yee is a shoo in for her re-election no matter what. But I’ll bet if anyone in their Offices did this kind of hinky employment ruse, that person would be gone in a heartbeat.

According to the blog Top Executive Search Firms, Heidrick & Struggles is rated #4 nationally of the top 20 executive search firms in the United States.

“Their methods are based on a thorough understanding of each client’s strategic, financial, and operational issues.”

You have to wonder what Ann Stausboll’s strategic, financial and operational issues were back when she retained the firm that produced Marcie Frost as their number one pick.

In the ordinary course of business, how could they have done due diligence and failed to note the fundamental misrepresentations on her resume? Who decided to use them, and how much did they charge? These are Wall Street insiders, whose president and CEO is former Goldman Sachs executive Tracy Wolstencroft. C’mon.

One hesitates to mention the “m” word – malpractice -- but this search seems to be right on the border, if not over the line.

While he lied like a rug on his employment application, Asubonten argued that it was all the fault of CEO Marcie Frost and General Counsel Matt Jacobs:

“Their failure to question him, Asubonten’s attorney wrote, mattered because it showed that Asubonten did not attempt to deceive CalPERS Chief Executive Marcie Frost and Chief Counsel Matt Jacobs when they interviewed him in August 2017.”

And instead of summarily terminating Asubonten, President of the Board Priya Mathur defended him! As did Marcie Frost.

This, along with recent irregularities in their Private Equity program and Election Irregularities still lingering from the last Board election, is all too much.

If CalPERS was a labor union, it would have been placed in Trusteeship a long time ago. And isn’t it ironic that CalPERS has a fiduciary relationship to the very union members who are the beneficiaries of the fund? It’s an Alice in Wonderland moment for the Agency.

Back in the 90s, I served as the Executive Officer for the Los Angeles County Civil Service Commission for about a decade. Based on those experiences I can tell you for a fact that Marcie Frost’s misrepresentations on her resume would have resulted in a quick letter of resignation or termination.

During that time, I learned a few things about acceptable conduct, and particularly about public employees. First, dishonesty seems to be a matter of character, be it stealing or fibbing. Whether it is an Eligibility Worker during the Northridge earthquake illegally putting in a claim for a hundred bucks or less, or a mid-level manager siphoning off public funds for personal use, you are either inherently dishonest or not. It’s part of who you are.

The second thing I learned is that the abuse of power by a public official is a corrosive betrayal of what constitutes a “public servant.” Whether displayed by a clerk, a public official, or a Board member, it straight up stinks. The tendency is again a matter of character, not training. It’s pure “I have the power, you don’t, too bad for you.”

Further, the higher the levels of dishonesty or abuse of power, the more people are impacted. Believe me, lower level employees know about the foibles of their bosses. If the higher ups are unethical power junkies, the morale of the troops is directly impacted for the worse. A key sign becomes the number of staff members who leave or transfer.

Unfortunately, the current Board President, Priya Mahur, believes in truly Trumpian levels of secrecy and hiding what should be publicly available documents from us, the beneficiaries. She also tried to cover up Charles Asubonten’s mess, presided over the $3.4 million settlement with Dow Jones over blatant copyright infringement, and put her finger on the scale of the recent CalPERS Board elections. What a Prez.

Please write or call any of the following officials to demand an investigation into this mess, since CalPERS itself seems incapable of doing so:

It is also important that the Board of Directors and CEO Marcie Frost get a copy of any letters, so they can understand that this conduct is not acceptable. Their email addresses are below:

In the copy to Priya Mathur, ask that she distribute your letter to the rest of the Board, since she has a habit of keeping these letters confidential.