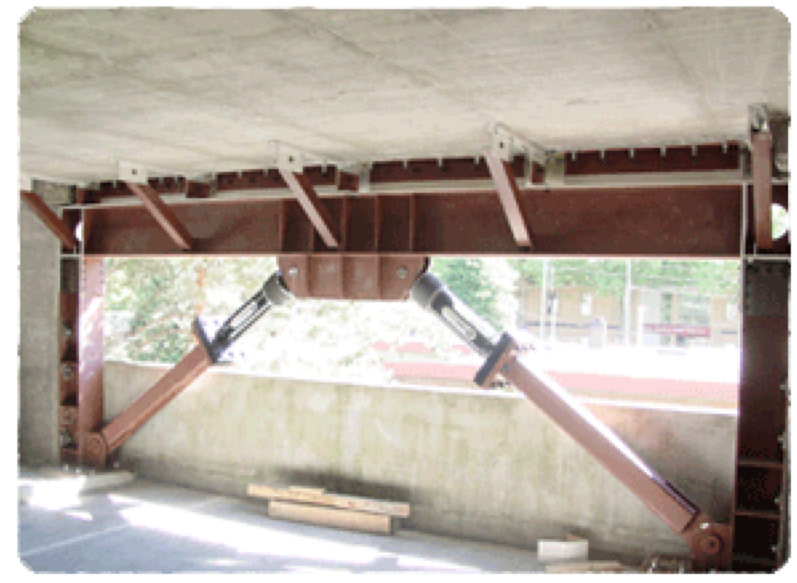 GELFAND’S WORLD--I think that the word ordeal is too strong a term.

Going through the process of seismic retrofitting might be characterized more accurately as an ongoing, chronic irritation. We have been exposed to some unsafe conditions and we have been forced to find street parking since May.

The first week: It was an otherwise normal morning, the opening days of the seismic retrofit process, but as I walked out the back gate, I was hit in the face and the eyes by a cloud of plaster dust interlaced with bits of gravel. The crew had not thought to warn the building's tenants about such hazards. We could have used a different gate, but no such direction was provided.

So much for a safe working environment.

As mentioned in a previous column, the building where I live is constructed in the style which is known assoft story, which is to say, the living quarters are built above the parking spaces. The first floor garage and its few support columns would not be strong enough to prevent the building from collapsing during a strong earthquake. Just like we've seen in television coverage of major quakes in foreign cities, the upper stories would settle into what is left of the first floor.

There are thousands of such soft story buildings in the city of Los Angeles, and they are among the worst hazards in the event of an earthquake. The city is requiring that such buildings be fixed.

I don't object to the idea of the required retrofit. Quite the contrary. The structural weakness should be repaired. The remedy is to erect an upside-down, U-shaped steel support structure. That steel cage is itself sunk into three or four feet of steel reinforced concrete. The whole cage, newly installed, is then attached to the original parts of the building so as to provide additional strength.

Interestingly, it is apparently not necessary to provide such cages for every garage, even when there are several garages sitting side by side. One steel support is supposed to be enough, as it will hold up the garages on either side. This means that some tenants can continue to use their garages during construction because they aren't part of the cage building process. But the ones who have been using the garage that gets the steel girders? We are out of luck for the duration.

From the tenant's perspective, things are annoying

For the affected tenants, the whole thing is less of an engineering marvel and more of an endurance contest. Avoiding the falling plaster and looking for parking every night are just two of the elements. Since the project started, what with open gates and open garage doors, we have had numerous thefts. Tenants have suffered losses of mail and packages that have been stolen from the inner courtyard. We don't blame the construction crews, but we do blame the fact that the building has become open to strange folk who wander through. Maybe the construction project had nothing to do with these thefts, but the temporal coincidence is there.

For me, it has meant two months of looking for street parking when I come home. There were a few weekends when the garage was freed up, but of late, there is another problem.

That's because the construction of the steel frame somehow managed to damage the garage door. The final concrete pour was a week ago Thursday, but the company still has not gotten the garage door to work properly.

And this is where the human element comes in. The company that contracted to do the work is not the friendliest. In fact, they have been downright insulting over the phone. They seem to have adopted a mentality of blaming the victim. I can't get the manager to call me back, even after three days.

So we continue to use street parking after more than two months. It would be nice to know when things will get fixed, but as to getting a call telling us the details? Not so much.

We originally got notification letters in the middle of May. We were instructed to vacate the garages as of 8 AM on Monday, May 21. The construction was scheduled to finish 60 days later. So we started parking on the street starting Sunday, May 20.

The actual project was close to 3 weeks late getting started. The construction company, American Retrofitters, blames yours truly for the delay. Now remember that I am just a tenant in the building. I'm not the owner (who signed a contract for about $60,000 in work). I'm not the city government, which requires the work. I'm just me, one of the tenants. I had no more say in this project than the people living down the block.

But I'm also a curious sort, particularly when the subject involves some outside company ordering me around and changing how I live. So when the company representative called me in advance of the work, I asked a few obvious questions: When would it start, when would it end, and would I be able to use the garage on the weekends when they weren't working? How would the tenants know what was going on?

And finally, I asked whether somebody from the construction company could meet with the tenants to explain what they were going to do, and answer the above sorts of questions.

You would have thought I was asking for stock in their company.

And here is the weird part of the story. The company representative suggested that I was the first person ever to ask for such a meeting. Not only that, but they were holding off starting work on the project in order to have the meeting with the tenants.

Of course the manager,  David Jacobson, was not available until several days later, and the company told us when he would be available to meet with us.

So I went to the meeting. It was generally cordial, and I got my questions answered. I was invited to contact them any time I felt necessary. I also got a chance to learn about the construction, which was interesting from the standpoint of earthquake engineering.

But there is one big, nasty fly in this ointment. American Retrofitters has now repeatedly claimed that they got started 3 weeks late because I asked for the meeting.

Let me repeat that so that the Department of Building and Safety, the City Council, and my fellow Los Angeles residents can understand what this experience is like for the people who live in these buildings. I would refer to it as an abusive experience.

There are a couple of possible explanations for the delay in the construction. The first is the obvious one -- American Retrofitters were more comfortable scheduling the actual work a few weeks late. Maybe they were busy on other projects at the time, or maybe there was some crucial element that needed to be in place -- after all, they needed to schedule the steel work, the city inspections of the work before the concrete was poured, the actual delivery of the concrete, etc.

All in all, there seem to have been a dozen or more workers involved over the various phases, and there have also been deliveries of all sorts of items ranging from giant dumpsters to welding apparatus to the steel.

It wouldn't be outrageous (or even unusual) for a contractor to be a little late in getting started. But it would be nice to have known in advance that they were going to be late. I could have avoided looking for street parking in the interim.

The other possibility, and currently the position stated by American Retrofitters, is that because one tenant (me) asked for an explanation of the project, that the whole affair was brought to a halt for several weeks.

It's a curious position to argue. If you were a professional construction company trying to get an owner to sign a $60,000 contract, would you preface the discussion by saying that construction could be held up for weeks if even one tenant asked for details? Would you write that into the permit application?

The choice as to which of the two explanation makes more sense is left as an exercise for the reader.

The manager of the project, David Jacobson, was called repeatedly but has not returned my calls so far. I wanted to ask him when the garage door will get fixed so that we can start using what we pay rent for. I did get a return call from a company representative. She repeated the claim that the construction was halted due to my request for a meeting. I find this hard to believe, but that is why I left a message for Jacobson with the chance to provide an answer. He has not returned my calls.

The lesson for city government

The city of Los Angeles is requiring the retrofitting of all these soft story structures. Thousands of apartment dwellers will be affected by this requirement in the near future. Right now, the city's permitting process doesn't seem to require much from the contractors regarding the effects on us tenants. There should be some protections written into the construction permits.

There should also be a way for the residents of these buildings to get help from the city inspectors when things go wrong. The morning when I got a blast of plaster in my eyes was one such event that should have been reported (to whom, I would ask) and the potentially dangerous conditions could have been remedied.

Here is one little suggestion that comes with good intentions: Workers who are using power tools that kick up dust and debris should be wearing eye protection. It's not a new concept.