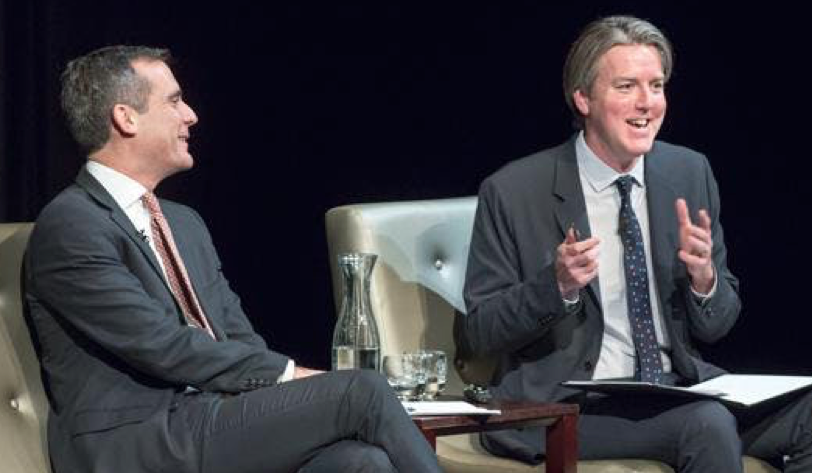 DEEGAN ON LA-Citing his “creative eye, and his understanding of urban design” Mayor Eric Garcetti recently announced that Christopher Hawthorne, architecture critic for the Los Angeles Timessince 2004, was joining his administration as Chief Design Officer.

It’s “a new post created to improve the quality of civic architecture and urban design across Los Angeles” explained the Mayor, that will “help bring a unified design vision to projects that are shaping Los Angeles’ urban landscape.” (Photo above, Christopher Hawthorne with Los Angeles Mayor Eric Garcetti.)

Busy adjusting to demands of his new portfolio, Hawthorne took a break to share some of his thoughts in a wide-ranging interview with CityWatch.

Q. Density is becoming a divisive term that is separating NIMBYs from YIMBYs. How do you get people to understand that “up is ok” as a design for our city?

CH:I was just reading a story on the front page of the LA Timesabout the fact that emissions from cars and trucks continue to drag down progress on California’s larger climate-change goals. What the story might have emphasized but didn't – something I think every story about air pollution and carbon emissions in Los Angeles now has an obligation to explore – is the link connecting climate, transportation and land use policies. Which is to say: we can’t think of ourselves as a progressive region on climate change if we’re not willing to take a hard look at where and how we build new housing.

Car use doesn’t exist in a vacuum. People regularly drive long distances here because 1) we stopped investing in mass transit for many decades in the middle of last century and 2) political policies during those same decades at the city, regional, state and federal level encouraged new residential development along the periphery of Los Angeles rather than denser infill in the city’s broad midsection. To me those historic/policy forces are far more consequential in terms of explaining our driving habits (or how we might go about changing them) than vague clichés about how Angelenos “love their cars” or are suspicious of transit. Encouragingly, our policy goals increasingly reflect a consensus that we have to chart a new path.

The recently approved Expo Line Transit Neighborhood Plan allowing denser development aroundfiveMetro stations was a political compromise, to be sure; it’s also an encouraging step in the direction of recognizing that we’re not going to reach our climate or transit-ridership goals without allowing more housing along our major train lines. We need to accelerate these efforts; we also need to realize that getting there will require the kind of community input and engagement the planning department and city council made room for in the Expo Line TNP discussions, even if such conversations can be complicated or fraught.

Q. Can you think of a term to describe someone whois interested in development whois neither a NIMBY or a YIMBY? Is there a middle ground, and what would you call that? How can that constituency be developed?

CH:I think most Angelenos would probably describe themselves as occupying this middle ground, which is to say they understand we can’t keep sprawling along the edges of the region but also have some concerns about how and where new development is going to happen and what it will mean for their own neighborhoods. And that’s understandable! (All politics is local,etc.) More and more, though, we have data suggesting clearly that there has been a steep price to pay in terms of pollution and affordability for the systematic way we’ve underbuilt housing across LA County for more than three decades.

Q. The city is morphing from a low slung horizontal profile to one that is tall and towered. How do we keep from looking like the city in Blade Runner?

I don’t know that we’re becoming tall and towered across the board, or as a rule. For a long time,LA has been characterized by medium-density development spread rather thinly over a huge area, punctuated by a few nodes or pockets of height (along the western end of Wilshire, Century City, downtown etc.). Each of those pockets tends to get thicker with towers during every major development cycle, and this last one was no different, except perhaps that we saw more towers go up downtown and fewer in the other nodes, relatively speaking. But we still have a de factoheight limit written into our city charter in the form of a 13-1 citywide floor-area-ratio (or FAR) cap. We’re a long way and will remain a long way from Blade Runner. Or Shanghai, Manhattan or Dubai, for that matter.

Q. The cityscape design mostly associated with Los Angeles is Spanish/Spanish Colonial. While we do have some very beautiful Art Deco and Streamline Modernestructures, we don’t have much that is Contemporary. How do we modernize our style to become more futuristic, sothe city appears to be looking forward in building and city design, and not just relying on historical design tropes that worked well for earlier generations, to which people may be sentimentally attached?

CH:Well, we do have one of the very finest collections of modern architecture in the world – a group of buildings that spans a wide chronological and stylistic spectrum from Irving Gill, R.M. Schindler, and Richard Neutra in the early decades of the 20thcentury to a long list of inventive figures after World War II. But you’re certainly right that Spanish Colonial Revival, by the 1920s, became a kind of default style, a sort of first-among-equals in a larger sea of eclecticism and variety. My own feelings on this score aren’t complicated: new buildings should reflect their own era and not try to recreate some earlier generation’s ideas about the relationship between architecture and civic identity. (I love George Washington Smith, for instance, but would certainly not want to go back to the notions about race and civic participation that marked the era when he worked.)

That said, there are times when the zeitgeist includes or gives rise to a particular interest in revivalism or desire to look to historical precedent for inspiration. That was true during architecture’s post-modern phase of the 1970s and 1980s and it’s true to a lesser extent today, with a number of talented younger architects mining historical themes in fresh and compelling ways. Any building that is genuinely interested in exploring the complexities of its own historical moment – whether by looking forward or backward or by doing something else entirely – is a building I can admire and support.

Q. The expanded subway, maybe even to the sea, and possibly some new light rail or other transit routes that will help define future development, and a thoughtfully developed Los Angeles River, feel like big projects that may help direct the design of the City. How do these major infrastructures fit into your vision of Los Angeles?

CH:You can’t think about the design of Los Angeles or its civic identity without putting infrastructure front and center. Quite simply this is a city and region that have been shaped for more than a century by bursts of remarkable, even unprecedented infrastructural ambition, beginning with the streetcars and the quest for water (and in the case of wrapping the LA River in concrete, the quest to protect us fromwater) and later with the freeway network. Now we’re trying to rebuild a comprehensive transit system for the first time since the Red Cars while also reimagining the river’s banks as public space (as opposed to a largely fenced-off no-man’s-land). For me, the common thread in our current infrastructural investments is a determined effort to reanimate the public sphere after many decades of neglect. A revitalized stretch of river, the sidewalks leading to a new Metro station, a new park: these are all signs of a city and region redirecting their energy and investment from the private to the public.

Q. The car culture seems to be changing with some decrease in dependency on having a personal automobile and the increase of other forms of mobility that include ride sharing and bikes. How do you see that impacting the design of the city?

CH:More and more Angelenos are seeing and understanding the city from more perspectives than just from behind the wheel of a private car. Whether it’s in the back seat of a Lyft or on a bike, a scooter, our own feet, or a bus or train, we have the chance now to move through the city at a variety of speeds -- and that may be just as important as being able to arrive at buildings in a range of ways.This has some direct architectural and urban-design implications. For instance, everybody in all those non-private-car categories I listed is likely to use the front door of their destination instead of parking underneath or behind a building as drivers in LAoften do. And the rise of autonomous vehicles will only accelerate this trend. That means the sidewalk assumes (or maybe reasserts) a larger prominence as the stage on which a growing share of daily life in LA plays out.

Q. Our Mayor, who had the foresight to create your position and fill it with you, will eventually term out. Does it cross your mind that his successor may not be interested in having a successor for you?

CH:Of course! These are simply the realities of having an appointed position. It will be up to the next mayor to chart her or his own course on issues related to architecture and urban design. My goal is to make it clear how much can be accomplished from this post, and the many ways in which what we do will benefit all Angelenos in terms of helping to produce a better designed, more inclusive, and more equitable city.

Q. What would you like a first-time visitor to Los Angeles, here for the 2028 Summer Olympics, to be impressed most about in the design of Los Angeles?

CH:I was lucky enough to be on two panels with Jonathan Gold in the two or three months before his death, and something he said at one of them has stuck with me: That there’s no better city in the country to find remarkable food than Los Angeles right now in large part because young chefs can come here and find space to operate in a strip mall or in a food truck. There’s a direct link, in other words, between the way the city makes literal and economic room for young chefs and the sort of risks they can take in the kitchen.

Los Angeles used to also be the best city in America to see innovative new buildings and understand where American architecture was headed. That’s faded as land has become more expensive and the city more regulated, and as younger and/or experimentally-minded clients have become tougher for architects to find. I want to promote a city that makes room (as it once did) for innovative young architects in the same way it still (despite how expensive housing has become) manages to make room for chefs. It would be fantastic if by 2028 we could achieve two things: 1) help create a policy and economic ecosystem where inventive new architecture, especially by emerging firms, can take root and thrive; and 2) bring that sense of experimentation and forward-looking energy, which for more than a half-century has marked important private houses in LA far more than civic architecture, back into the public realm.