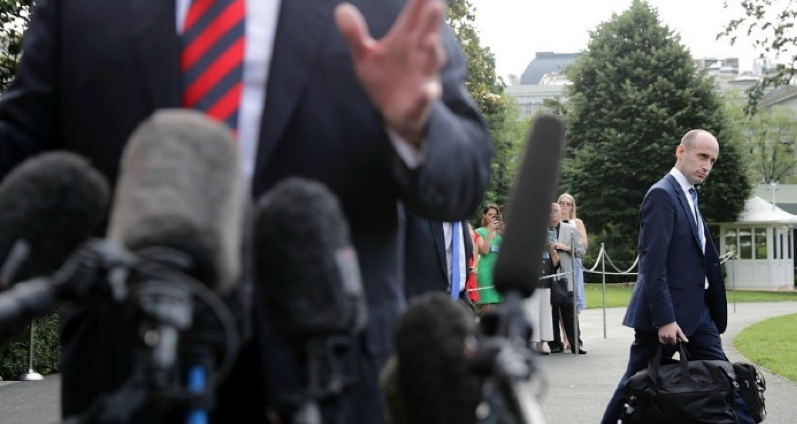 ALL ABOUT RACE--Trump critics argued on Monday that the debate over President Donald Trump's policy of prosecuting asylum seekers and separating children from their parents at the U.S.-Mexico border should be centered on the driving force behind the practice—the racism and xenophobia of top Trump officials and those who constitute his political base. (Photo above right: ‘proud racist’ Stephen Miller.)

On Sunday, former Trump adviser Steve Bannon appeared on ABC's "This Week," telling guest host Jonathan Karl that he "couldn't be prouder" of the president—while in Texas, lawmakers and immigrant rights advocates rallied at a processing center for refugee-seeking families who are being separated by Trump's "zero tolerance" policy.

Bannon dismissed the widespread concern over the thousands of children being kept in detention centers as one held by "elites."

"The morality is the law. They're—they're criminals when they come across. Okay? Illegally. And that's why they're getting separated," Bannon saidof the immigrants who have traveled from Central American countries, often escaping political unrest and violence. "...Donald Trump is put in a terrible situation...because the permanent political class in this city has not wanted to address this."

"President Trump and his policy makers, having risen to power on the back of Trump’s xenophobic campaign rhetoric, employ a darker and more morally flexible pragmatism. Implementing the border separation policy has always been part of their plan, it just took a little longer than people like Stephen Miller had hoped." —Chas Danner,New York

Meanwhile, Trump's senior policy adviser Stephen Miller spoke to the New York Timesabout the policy—one that he has fought to implement since the president was inaugurated.

"It was a simple decision by the administration to have a zero tolerance policy for illegal entry, period," he told the Times.

Miller was also a chief architect of Trump's original ban on travelers from several majority-Muslim countries, callingit a necessary step aimed at "protecting the country."

In March, Dennis Carter at Rewire Newsurgedthe media to confront the truth about Miller's white supremacist beliefs masked as policies aimed at protecting Trump's base and those who fit the administration's definition of "real Americans":

Miller's influence—and extremism—is seen in Trump administration officials' flippant use of the term "globalist," a racist dog whistle term used to smear Jewish people as disloyal to a nation. ...Miller has long dismissed the idea that the United States should embrace membership of a global community, preferring instead who he calls the "real flesh-and-blood citizens who together create this body politic, this nation, this home, represented by that flag."

In recent days Trump has tweeted several times about the policy, outlining on Friday a list of anti-immigration demands that Congress must meet in order to end the forcible separation of families"—drawing comparisons to a ransom note as thousands of children are detained.

Homeland Security secretary Kirstjen Nielson on Monday defended the administration's decision to enforce its "zero tolerance" policy for immigrants it claims are breaking the law—despite the fact that seeking asylum is a legal right. She claimed the children who are taken to detention centers across Texas are "very well taken care of"—hours after altogetherdenyingthat her agency has a policy of separating families.

But as the president and his Cabinet respond to protests over the policy, top officials have yet to admit that the separation of families is deliberate.

"President Trump and his policy makers, having risen to power on the back of Trump's xenophobic campaign rhetoric, employ a darker and more morally flexible pragmatism," wroteChas Danner at New Yorkmagazine on Saturday. "Implementing the border separation policy has always been part of their plan, it just took a little longer than people like Stephen Miller had hoped. ...Zero tolerance, especially toward immigrants, isn't just a policy proposal to this president and his allies—it is the ideology that animates the entire Trump phenomenon, and a defining characteristic of the world as they want it to be."

(Julia Conley writes for the excellent Common Dreams  … where this Insider Report originated.)