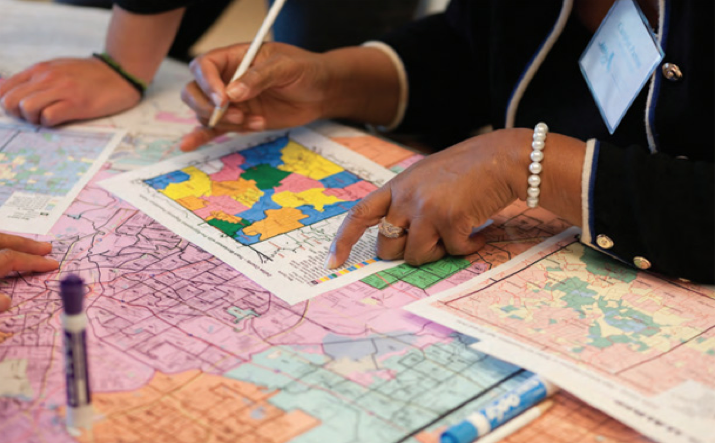 CAL MATTERS--After the newly created Citizen Redistricting Commission redrew congressional and legislative districts in 2011, Republicans complained that the new maps were tilted in favor of Democrats.

The subsequent three election cycles seemingly confirmed the Democratic advantage, as the party expanded its control of the congressional delegation, gained two-thirds supermajorities in both legislative houses in 2012, lost them briefly in 2014, and regained them in 2016.

A new mathematical analysis of the 2011 maps reaches the same conclusion, contrasting them with the last redistricting by the Legislature in 2001.

“This evaluation of the California Redistricting Commission maps suggests that the CRC plans have been more favorable to Democrats, on average, than the plans drawn by the California Legislature in 2001,” says the study, conducted by a Public Policy Institute of California research team headed by Eric McGhee.

“However, much of the difference appears to be driven by outlier elections. There is some inconsistency, but the typical election year features a small advantage under the CRC plans.”

Does that mean that the CRC, composed of equal numbers of Democrats, Republicans and declined-to-state voters, consciously helped Democrats tighten their already strong grip on California?

Some Republicans believe so, but the McGhee study, the historic record on redistricting and my personal observation of the CRC’s incredibly lengthy meetings, which delved deeply into block-by-block minutiae of 173 legislative and congressional districts, indicate otherwise.

As McGhee accurately notes, the 2001 maps were a bipartisan gerrymander, aimed at preserving the numerical status quo in the Legislature and the state’s congressional delegation.

Democrats controlled the Legislature and the governorship at the time, and theoretically could have grabbed every possible seat through creative cartography – as they had the previous time they controlled the process, in 1981. But for a variety of reasons, including the possibility of intervention by the Republican-controlled U.S. Department of Justice, Democrats agreed with Republicans to enshrine the status quo.

It was a big tactical win for Republicans, but it also ignored the immense demographic and political changes that had occurred in California during the 1990-2000 decade.

When the CRC took over redistricting after the 2010 census – thanks to ballot measures sponsored by a major Republican donor and backed by then-Gov. Arnold Schwarzenegger – it was confronted with adjusting California’s political maps for two decades of societal changes.

That fact, coupled with the commission’s large contingent of non-white members – particularly Asians – and its desire to maximize representation for cultural and ethnic “communities of interest” led to very dramatic changes in district boundaries. Those changes did, in fact, favor Democrats because their voter pool, and those of Democrat-leaning independents, had been growing while Republican voter rolls had been shrinking, and are continuing to shrink.

PPIC’s report on redistricting is especially timely because of what’s been happening in other states.

Unlike California, most state governments are dominated by Republicans and they have done what Democrats used to do in California – draw districts that favor their party. It’s a major factor, although certainly not the only one, in Republican control of Congress.

Disregarding their own record of such power-grabbing, Democrats have complained loudly about GOP gerrymanders and won some court battles in some states. It’s possible that the U.S. Supreme Court will lay down new standards for remapping in advance of the 2020 census.

California’s commission process isn’t perfect, and the McGhee report suggests how it could be improved.

But it’s one that other states should emulate because it’s just plain wrong for politicians to draw districts that favor whichever party happens to control the process in the year following a census.

Voters should be selecting their representatives, not the other way around.