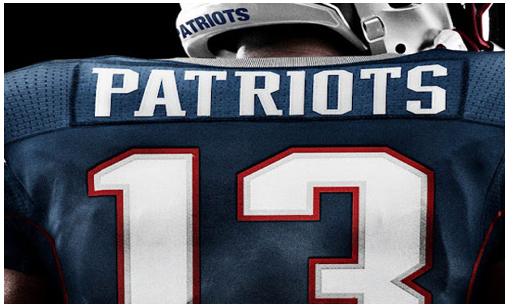 LABOR WATCH--Just how patriotic is Patriot-wear? Is Eagle gear as American as our national bird?

The National Football League prides itself on patriotism. The League wraps itself in the American flag, from the Stars and Bars stretched out onto the field before games to flyovers by our impressive military. The NFL is so patriotic that should a player commit the subtle yet poignant act of not standing for the National Anthem, that player runs the risk of getting blacklisted.

Considering just how patriotic the League is, it strikes us as hypocritical that the NFL’s replica jerseys that cost an arm and a leg are manufactured outside of America.

The Super Bowl is big business, from the richly-paid athletes and deep-pocketed owners to multi-million-dollar endorsement deals and television spots that run for $5 million per 30-second spot.

Merchandising is no exception. Take, for example, The NFL’s deal with Nike. The folks with the iconic swoosh pay an average of $220 million a year to be the exclusive supplier of the NFL’s gear.

According to The Morning Call, “virtually all of Nike’s apparel is made outside of the United States by independent contract manufacturers,” and factories in China, Vietnam and Indonesia produced more than 50% of Nike’s apparel in 2016. And according to the Alliance for American Manufacturing, “the NFL licenses the rights to replica jerseys worn by fans to many different companies. The majority of these replicas are manufactured in countries such as Honduras and Guatemala.”

You’ve all heard stories of sweatshops and low pay for garment workers in other countries.According to the Institute for Global Labour and Human Rights, garment workers in Vietnam earned between 36 and 52 cents an hour starting out, Indonesia 35 and 71 cents an hour, Guatemala $1.21 and Honduras $1.02. No wonder Nike has a healthy stock price in the high $60s, making the company worth billions of dollars.

To be fair, there are some manufacturing bright spots when it comes to the Super Bowl. According to the AAM, pretty much everything else you associate with the Super Bowl is made in America. Helmets, the ceremonial coin for the coin toss, footballs, Gatorade and the Vince Lombardi Trophy…check, check, check and check again. And the jerseys worn specifically by the players on game day are made in America.

But numbers don’t lie. A Tom Brady or Zack Ertz Super Bowl LII replica jersey goes for $119.99 on the official NFL Shop website. What do you think the mark up on that is? If that same jersey were made in America and carried that same price, would the profit margin be impacted that significantly?

If the League was really patriotic, it would take the necessary measures and insist that everything it sells, everything associated with its highly protected logo and the logos of its teams, be made in the U.S.A. Just imagine a world where the folks making these official replica jerseys could actually afford to purchase one themselves?

Ensuring that good, middle class jobs are created stateside for the sake of what has become the National Pastime? That would truly be patriotic.

(Cherri Senders is founder and publisher of Labor 411 (www.labor411.org), a Los Angeles-based consumer guide to companies that treat workers fairly.)