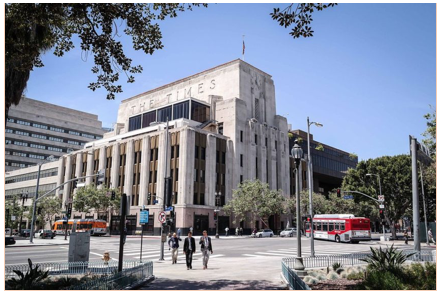 Rather than suffering from a strange form of dyslexia, Marcum seems to be afflicted with an ailment common to good journalists: seeing things too clearly. (Photo above: The Los Angeles Times building. The Times is one of several newspapers owned by Tronc, an American publishing company based in Chicago. (Visitor7 / Wikimedia)

Tronc is the oddly named abbreviation for “Tribune online content.” It was once called the Chicago Tribune and is now owner of the Los Angeles Times and other papers.

What Marcum sees is that the erratic, disorderly, authoritarian President Donald Trump operates in the same way as Tronc, which has put the Los Angeles Times on a calamitous path. They share the same volatile behavior, the same incompetent planning and management, and the same scorn for the rights of individuals.

Trump and Tronc disrespect the rule of law. In Trump’s case, it is the Constitution and other laws and traditions that aim to protect us from the untrammeled impulses of an out-of-control president. With Tronc, it is the separation of the business department, particularly advertising, from newsgathering. This isn’t law. But it’s ethical practice and tradition, just as important as the law to journalists. Generations of Times journalists have fought for these standards, once defying management in a confrontation that shook the newspaper to its core.

Granted, Trump, with his presidential power to round up immigrants in a police state manner and threaten a nuclear attack on North Korea, is more dangerous than a newspaper with a 250,000 circulation on weekdays, 500,000 on Sundays and more than 100,000 online subscribers.

But, like a president, a newspaper such as the Times has great influence, especially in its geographic area. Its reporters act as watchdogs on government and other institutions, and the paper, through its story selection and editorials, is crucial in setting a civic agenda. It can be a force for good or, like Trump, an instrument of destruction.

The Times began its downhill slide in the 1980s when the big profits long typical of newspapers began to diminish across the country. Circulation dropped as readers migrated to the internet. Advertising declined, too. It became increasingly difficult to make the big profits once typical of newspapers. A conservative faction of the founding Chandler family installed a new management team for Times Mirror Co., the corporate owner. It began experimenting with partnerships with businesses, including advertisers, to pump up revenue. They finally sold the paper and others in Times Mirror Co. to the Chicago Tribune in 2000.

Outgunned by internet visionaries, the Tribune company tried everything, including eventually changing its name to Tronc. Editors John Carroll and Dean Baquet worked hard and had their successes, particularly in investigative reporting. But they quit rather than accept Tribune demands for staff reduction. Since then, years of layoffs, cutbacks in coverage and a nervous, often ineffective, editorial leadership have reduced the newsroom from more than 1,000 staff members in 1999 to about 400 today, a shadow of what it once was. Still, the talented journalists soldiered on, picking up more Pulitzer Prizes and breaking big local stories.

At this point, the story shifts to another in a continuous line of editors: Lewis D’Vorkin and the man who hired him as editor in chief last October, publisher Ross Levinsohn. D’Vorkin was headlined as L.A.’s “Prince of Darkness” in a recent profile in the Columbia Journalism Review. The prince reference comes from a book by Stewart Pinkerton, “The Fall of the House of Forbes,” a magazine D’Vorkin had edited. Two chapters were devoted to the prince.

At the Times, under D’Vorkin’s reign, the restive Times newsroom voted overwhelmingly to join a union, the NewsGuild—a landmark in the history of a paper once famed for its anti-unionism.

Levinsohn was recently placed on a leave of absence because of allegations of sexual harassment.

Does this have a Trumpian sound?

But before Levinsohn left, he and D’Vorkin came up with a plan they felt would turn the Times into a digital-age moneymaker and permit the staff to be reduced even more. They hoped to get people to write for free on subjects they may or may not know something about. They would be citizen journalists. Possibly, a business could slip them a few bucks under the table for writing an article that would make them look good in the Times, placed next to legitimate news stories.

Nieman Lab’s Ken Doctor revealed how these citizen journalists would write for editors employed by a new organization, Los Angeles Times Network LLC, “parallel to and separate from Los Angeles Times Communications LLC. “Each editor would specialize in a subject—race, business, restaurants, fashion, film and whatever else is hot. These would be called verticals, and the editors would be hired and presumably supervised by the business side. They would not be covered by the union contract. Nor would the non-paid or low-paid citizen journalists.

The Huffington Post put it this way in a headline over a detailed piece: “Tronc is Building A Shadow Newsroom Full of Scabs, L.A. Times Staffers Fear.”

In the Columbia Journalism Review, Lyz Lenz wrote, “D’Vorkin brought with him a reputation as the media equivalent of a house flipper—making cosmetic changes to gussy up a brand for some quick cash. At Forbes and at his Forbes-funded startup True/Slant, he performed his media remodel by instituting a contributor model, where writers were paid according to the volume of their traffic or sometimes not at all. The scheme flooded Forbes with content, a swath of it of suspect quality and journalistic value, but enough to boost traffic and entice an Hong Kong firm, Whale Media Investments, to buy Forbes for an undisclosed amount in July 2014.”

D’Vorkin was “livid” when his employees “leaked” information about his plans. His reaction bore similarities with Trump—and President Barack Obama, too—but D’Vorkin’s ire had much more of a Trumpian, mad-dog quality to it than any of the Obama anti-leaking moves.

D’Vorkin brought up the leaks at a staff meeting, the Huff Post reported. “At its core, it was unethical. And frankly, I think it showed a degree that whoever was involved was morally bankrupt,” he was quoted as saying in another leak.

The Huff Post said that Tronc sent out a sleuth, human resources executive Diana Burke, to help find the leakers. The witch hunt claimed one casualty. Business editor Kimi Yoshino was ordered out of the building and suspended for two days. She had edited a story on the collaboration between Disney and the city of Anaheim, an investigation that D’Vorkin opposed, according to staff members. Disney hated it, too, and banned the Times from film previews, relenting only when the paper, presumably D’Vorkin, coddled the entertainment and advertising giant.

D’Vorkin was also getting proactive about leaks, multiple staffers told the Huffington Post. They expressed concerns that Tronc was monitoring company phones and computers—and apparently they have reason to be worried. One former staffer noted that “people are being hauled before D’Vorkin and Burke to explain why, for example, they had an 11-minute conversation with Sydney Ember of The New York Times on a particular date.” Staffers have been using encrypted messaging apps, such as WhatsApp, to speak with one another, with some going so far as to buy actual “burner phones” to discuss their own newspaper.

“It strains belief that the editor in chief of a major newspaper, with all the other issues and challenges confronting the LAT, is conducting a leak investigation of his own staff,” a former employee said. “That’s the kind of thing the FBI and NSA do to persecute journalists. To see an editor do it is dumbfounding, and sickening.”

Amid the turmoil, D’Vorkin has been thrown out as editor, sent back to Chicago for a vaguely titled job that may or may not be important to Tronc’s Times makeover. The new editor is Jim Kirk, who is so trusted by Tronc that they have sent him out on a number of messy jobs, but none as messy as this one. Tronc backed the D’Vorkin citizen journalist plan. Whether Kirk has the clout or desire to reverse it remains to be seen.

Finally, there’s history behind this, and of the staff rebellion that no doubt played a part in D’Vorkin’s departure.

In the late 1990s, one of the desperate moneymaking proposals advanced by a pre-Tribune management team was to share ad revenue from an edition of the Los Angeles Times Magazine devoted to the new Staples Center. It would be a big puff piece on the sports arena.

The staff rebelled at this breaking down of the wall that separated the business side from editorial. Like the present rebels, many of these earlier ones were from the metro staff, a particularly feisty and independent bunch. As city editor, I was their supervisor.

Petitions emerged from the staff against the Staples deal, demanding an investigation. Outraged at the deal, I signed the petitions, figuring my signature might persuade others to join in the protest.

By then, the last great Chandler, Otis—who had turned the old Times, a right-wing rag, into a prosperous enlightened, moderate force in local, state and national affairs—was in retirement, forced out by his conservative relatives.

He brooded at his ranch over the Staples affair. He called me at the paper. He said he had a message he wanted me to deliver to the staff. I took it down on my computer and at 6 p.m. assembled the journalists. People came from every department. The huge workspace was full. Against the wishes of my bosses, I stood at the city desk and read Chandler’s message:

If a newspaper, even a great newspaper like the Los Angeles Times, loses credibility with its community, with its readers, with its advertisers, with its shareholders, that is probably the most serious circumstance that I can possibly think of. Respect and credibility of a newspaper is irreplaceable. Sometimes it never can be restored no matter what steps might be taken in terms of apology by the publisher … in hopes of putting the pieces back together.

Chandler, who died in 2006, would have been proud of this generation of rebels, although he might have struggled to understand the union thing. He would have admired the way they have risked their futures by standing up to a mean-spirited and shortsighted management so similar to Trump. He would have backed their struggle for “the public trust and faith in a newspaper.”

Trust and faith is what is at stake at the Los Angeles Times. Just as it is in the besieged United States.

(Bill Boyarsky is a columnist for Truthdig, CityWatch, the Jewish Journal, and LA Observed. This piece was posted first at Truthdig.com.)