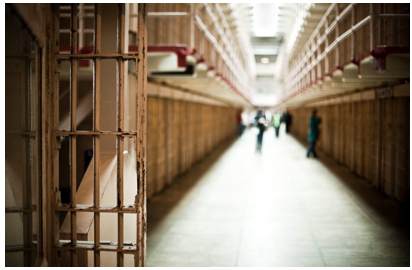 CAL MATTERS--Gov. Jerry Brown wants to add millions in new spending on programs to help former inmates stay out of jail—a proposal generating bipartisan praise because of concern they are returning to prison in large numbers. But some say it still isn’t enough.

The proposed $50 million would expand job training for prisoners and assist them in finding jobs once they are released, such as training them to become firefighters.

“The old way of locking people up and throwing away the key clearly hasn’t worked. It’s just led to a lot of costs but not a lot of results,” said Assemblyman Phil Ting, a San Francisco Democrat who chairs the Assembly’s budget committee. But he wants to see more money spent on efforts to prevent people who’ve served their time from committing crimes again, although he declined to give a specific amount.

“What we would love to see this year is perhaps a longer-term investment that may actually help reduce the population because they’re not recidivating anymore,” he said. “It’s an area that we’ve talked a lot about, but I don’t think that we’ve done enough or taken a harder look at what’s working and what’s not working.”

Perhaps the most troubling evidence of what’s not working: Of some 36,000 state inmates released in the most recent year for which state data is available, 46 percent were convicted of crimes again within three years.

“That’s a very miserable number. It indicates that the efforts, as currently constituted, are not being as successful as they need to be,” said Assemblyman Tom Lackey, a Palmdale Republican. He said he was happy to see the governor proposing new spending on anti-recidivism efforts, but plans to introduce legislation to audit rehabilitation programs to determine which are successful.

Experts say it’s difficult to directly compare recidivism rates among states, but California’s rate is considered high, said Mia Bird, a research fellow at the nonpartisan Public Policy Institute of California. California’s state prison population is about 130,000. The state’s incarceration rate had been higher than the national average in the past, but it has fallen sharply: Last year California had 334 state inmates for every 100,000 residents.

Part of that dramatic decline was driven by a policy known as realignment, which moved offenders determined to be less serious from state prisons to local jails or back into the community under supervision. Lawmakers made that major switch in 2011 after federal courts ruled California prisons were too overcrowded to provide inmates adequate health care.

Supporters promoted realignment as a way to keep former inmates from reoffending by shifting more responsibility to county officials, who theoretically would understand better than the state what programs their communities need.

“Recidivism rates didn’t change much after realignment, so everyone can breathe a sigh of relief that they didn’t go up dramatically,” Bird said. But she acknowledged that recidivism levels are still high and have been for a long time. “In the short run, we might need to spend a bit more money in order to have some long-run gains.” 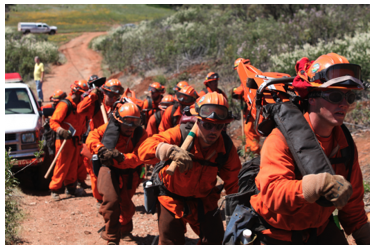 (Inmates have worked fighting recent wildfires in California. Photo via California Department of Corrections and Rehabilitation)

After realignment kicked in, voters approved two initiatives to further lower incarceration rates by reducing punishment for low-level offenders: Proposition 47 in 2014 and Proposition 57 in 2016. But neither realignment nor the other changes have resulted in the crime reductions or savings supporters promised, said Sacramento County District Attorney Anne Marie Schubert.

Prop. 47, which lessened penalties for lower-level crimes, including some types of theft and illegal drug use, “wreaked havoc” in California, she said, citing what she described as “rampant” and underreported retail theft as evidence the punishments under the law are too lenient to deter crime.

“We need more resources,” Schubert said. “It’s not a cheap process to help get people back on track, but we have to be willing to invest.”

Brown proposes to spend about $12 billion—9 percent of the state’s general fund—for the Department of Corrections and Rehabilitation in the fiscal year that begins in July. The budget includes more than $130 million to fix roofs, remove mold and update other aspects of aging infrastructure.

Although it’s important for prison facilities to be maintained, money could be better spent on services for former inmates after they leave prison, said John Bauters of Californians for Safety and Justice, a group that advocates for criminal justice reform. The governor’s budget doesn’t make any “dramatic” changes to money spent on rehabilitation programs for inmates, which need to be matched by programs to help people when they re-enter society, Bauters said.

“We’ve got so much money that is being spent right now on prison programs and the reality is that if we actually invest in proven prevention methods and rehabilitative programs, we won’t have the same need to spend that kind of money in the future,” he said.

Assemblyman Reggie Jones-Sawyer, who chairs the Assembly Public Safety Committee, also is advocating greater accountability—saying he’ll request a review of rehabilitation programs to ensure the state is investing in ones that work. The Los Angeles Democrat praised the investment in community incentives to lower recidivism rates, saying “I think it’s definitely going to be one of his legacy pieces.”

Prison reform has been a key goal of Brown’s throughout his current term as governor. He championed realignment and Proposition 57, which expands the portion of inmates eligible for parole.

“He’s been telling me for years that he really, really wanted to work on the overcrowding in our prisons,” Jones-Sawyer said. “He really felt for California to have one of the highest incarceration rates in the country, it really bothered him.”

Some have criticized Brown’s approach policies as too soft on crime. State Sen. Jeff Stone blames realignment and other policy changes for what he characterizes as high crime rates in the state. “We are letting too many people out of jail and we aren’t putting enough people in jail or prison,” the Temecula Republican said. “We’re not holding people accountable for their crimes.”

Between now and June, Brown and Democrats who run the Legislature will negotiate a final budget deal. Although the state is expecting a $6 billion surplus this year, Brown has repeated his usual caution to Democratic lawmakers, who typically push for more spending, to save much of that money for a future recession.

But Ting says he sees a key opportunity this year to invest in efforts to stop recidivism. It’s Brown’s final year in office and therefore his last chance to solidify the criminal justice policy changes he oversaw.

“Our hope is that we can find significant common ground in this area,” Ting said. “We want to ensure that every individual who’s in the system, we’re doing everything possible to work with them so they don’t come back.”

(Sophia Bollag is a contributing writer to CALmatters  … where this report originated.)