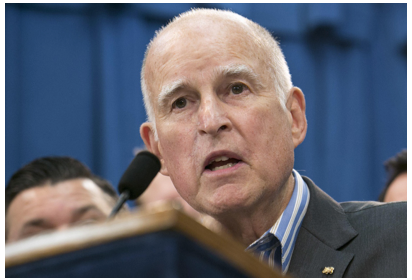 CAL MATTERS--The camera and lights switched on and Ole Torp, the Charlie Rose of Norway, leaned in, silver hair flashing, and posed his first question to Gov. Jerry Brown.

“Is the world going to hell?”

The interview, taped last week in Oslo, was declared a fabulous success, one the television audience would quite enjoy.

How to explain the climate-change world’s curious embrace of a man with so apocalyptic a message? On a nearly two-week swing through Europe, starting at the Vatican and ending at the United Nations climate change conference in Bonn, Brown offered a bleak appraisal of the global future:  We are on a trajectory toward hell. It’s a headlong rush to a very unpleasant outcome. Mankind is on the chopping block.

Yet Brown dazzled. His message—the planet is burning up, and our oil-driven way of life must change—brought Vatican scientists to their feet. European parliamentarians in Brussels swooned, calling him a warrior. In Oslo, an international group of scientists paid Brown their highest compliment: inviting him to their inner sanctum for a day-long “dialogue,” a dreary recitation of the looming crash of spaceship Earth. Students in Stuttgart, inheritors of the mess Brown describes, mobbed the 79-year-old for selfies.

It wasn’t all adulation, all the time. A rebuke from a couple of parliamentarians in Brussels led to a sharp exchange over the effect of climate-change policies on the poor. And hecklers tried to shout down the governor during a speech in Bonn as they protested his oil policies.

But the criticism did little to deter Brown, who was on message throughout the trip: Climate change is a serious threat, California is doing its part—and, especially, come to San Francisco next year for a climate conference that gets things accomplished.

In the absence of a climate policy from the U.S. government, or a recognition that human activity has played a role in warming the world, Brown has become a de facto climate leader—Al Gore 2.0, as an Afghan journalist here observed offhandedly. During his trip, Brown was repeatedly called on to voice an opinion on President Trump’s assertion that climate change is a hoax. He told CNN’s Christiane Amanpour in a taped interview Tuesday that “Trump better get on board or get out of the way.” On most other occasions, Brown largely held his fire, perhaps not wanting to give the president’s arguments any oxygen.

Mostly he focused on burnishing California’s “green” reputation—and his own, as he looks ahead to life after Sacramento, a subject he won’t go near. Brown reminded his audiences that the state has the nation’s strictest fuel standards, subsidizes electric cars and demands the most energy-efficient buildings.

He held sessions with members of the Under2 Coalition, a group of more than 200 nations, states, provinces, academic institutions and faith groups that have pledged to reduce carbon emissions and work with each other to meet the goals of the U.N.’s 2015 Paris climate agreement. That includes a commitment to keep global warming below two degrees Celsius. The group, which Brown helped create, is gaining in heft, with several new members acquired during Brown’s trip. According to the coalition, it represents more than 1 billion people and nearly 40 percent of the global economy.

Brown argues that climate-change policy is local as much as national or global, that mayors, governors and regional officials can bring about significant change. That argument swayed the government of Fiji—which currently holds the rotating presidency of the conference—to name Brown to the position of special advisor for states and regions. That position did not give the governor access to the negotiating table where the U.S. delegation and others are hammering out implementation rules for the 2015 Paris climate agreement.

Brown’s stated purpose for going to Europe was to raise awareness about the threat of climate change. At every stop, officials said they found power in his message.

Sandy Pitcher, the Chief Executive of the Department of Environment, Water and Natural Resources for the state of South Australia, described Brown as “authentic.” “He’s channeling something like the tough lesson you have to hear and should hear, you’ll thank me for it later,” she said. “I don’t think we have someone like him in Australia in the public discourse doing what he’s doing.”

Her state belongs to Under2. These so-called subnationals -- “supernationals” as Washington Gov. Jay Inslee said here—will put on their own summit next September in San Francisco. The meeting, sanctioned by the U.N., will bring together nations and industry and require each entity to report its annual emissions and set a reduction goal.

The inclusion of businesses is unique. Brown said that businesses -- some of them big carbon emitters -- could potentially provide the technology to solve pressing climate problems. And their presence can send a signal that California is open to, and for, business.

Now Brown and his staff are mostly back in Sacramento. It’s likely to be a hard landing for the governor, leaving the mostly enveloping warmth of like-minded people to tangle with a sometimes-unruly Legislature and get back to the arduous job of managing California.

He returns to a state where not everyone is in the thrall of the climate-crusader message. Critics in the environmental justice movement, for example, say laws to reduce pollution have not yet made lives better in many low-income communities still plagued by toxic air, water and soil -- that Sacramento’s good intentions seem to be scrubbing clean every backyard but theirs.

With legislative priorities looming for his final year in office, Brown claims to not have a comprehensive idea of what he wants to accomplish.

“I don’t have an agenda for next year. I don’t even think about it,” he told CALmatters in an interview during the conference that was only partly disrupted when Arnold Schwarzenegger, also in town for the conference, stopped by to chat.

“I’m a step-by-step kind of guy,” Brown said. “We have continuing work to increase the rehabilitative character of our prisons and jails. We have to up our capacity to transform lives instead of re-imbed and reinforce antisocial behavior. That will require effort, and mental health programs.”

Much of the environmental legislation he has championed is now on the books. With enormous political effort during the summer, he was able to extend the state’s cap-and-trade program until 2030. What’s next? Brown supports an electricity delivery system that spans the West, offering better integration and sharing of renewable power, among other benefits.

Such a plan would cede state decision-making to a regional authority, and Brown admits the highly complex project may take a while.

Control of the grid is a thorny issue. For example, states have varying requirements for the use of renewable energy, and California would hesitate to import coal-fired power from elsewhere.  Working out such elements is complex and painstaking.

“We don’t get instant coffee,” he said. “I didn’t do everything the first year. Each year there are more things that become possible because we’ve done other things. It’s a good idea and it will come.”

First things first: another summit, which Brown, in his grumpy fashion, intends will be more of an anti-summit.

“There a lot of talking and there’s a lot of eating at these things,” Brown said. “I’ve talked enough. I want to get something done.”

(Julie Cart is a Pulitzer Prize-winning reporter who has worked as an environmental reporter, sportswriter and national correspondent during her three decades with the Los Angeles Times. This piece appeared first in CalMatters.)   Prepped for CityWatch by Linda Abrams.