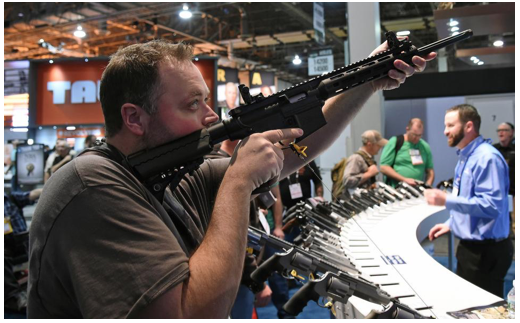 GUN SHOWS VS. GUN LAWS-Firearms-related deaths and injuries increased 70 percent in parts of California in the weeks after gun shows in neighboring Nevada, which has fewer regulations on such events, a University of California, Berkeley study released on Monday found.

The research could help prevent gun deaths by charting a pattern between where weapons are purchased at gun shows and where shootings take place, according to the authors.

The study, which was partly funded by the National Institutes of Health, examined firearm injury rates before and after California and Nevada gun shows between 2005 and 2013 in areas of California near the shows.

Researchers found that rates of firearm injuries were steady after California gun shows but increased significantly, from 0.67 to 1.14 per 100,000 people, in California regions near the Nevada shows.

The authors of the study, which will be published in an upcoming issue of Annals of Internal Medicine, say California’s stricter gun regulations could help explain why there was an increase after Nevada gun shows and not California shows.

Another possible explanation for the difference is that California gun buyers are bypassing that state’s 10-day waiting period by driving into Nevada to make their purchase.

“Better understanding the long-term effects of gun show policies, and the patterns of acquisition and use of firearms, would provide important evidence to inform future efforts to prevent firearm injuries,” the study concludes.

The new research comes just weeks after wealthy retiree and gambler Stephen Paddock opened fire on an outdoor music festival on the Las Vegas strip, killing 58 people before taking his own life.

A gun show scheduled for Las Vegas later that week was canceled in the aftermath of the massacre.

An editorial accompanying the study called on Congress to fund more research into the way public policy affects firearms-related injuries and deaths.

“The recent mass shooting in Las Vegas, Nevada, was a painful reminder that injuries and deaths resulting from access to guns continue to bedevil many parts of U.S. society,” said Ali Rowhani-Rahbar and Frederick Rivara of the University of Washington, who were not involved in the study.

The National Rifle Association said it would need to evaluate the research before commenting.

California has some of the nation’s strictest gun laws, including a comprehensive set of regulations on gun shows. Nevada’s gun laws are some of the least restrictive in the country and impose fewer rules on gun shows.

(Dan Whitcomb is a reporter. This piece appeared via Reuters in the HuffingtonPost.  Editing by Patrick Enright and Andrew Hay) Prepped for CityWatch by Linda Abrams.