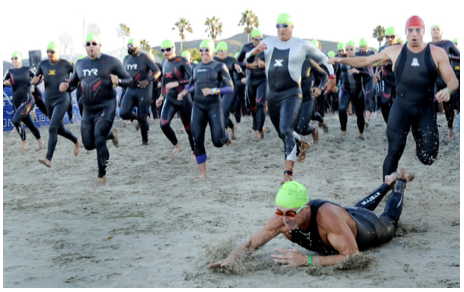 THE PREVEN REPORT--Just last year Herbalife was fined $200 million by the Federal Trade Commission for being a pyramid scheme—and yet this coming Saturday, September 16th, at Malibu’s Zuma Beach, thousands of participants and spectators will gather for the “Herbalife International Distance Race Triathlon.”    (Photo above: 2016 Malibu Triathlon.)

Here’s a blurb from a Herbalife distributor marketing video dated 11/28/2011:

“If you want some money today, perfect, put together a retail plan. But if you want lifestyle money, if you want to build that financial independence, you want to lock in that security for life, you need to recruit. And the other thing you need to do, be prepared to roll that cash flow for straight 9 to 12 months. Because you know what, in that short space of time, by making that commitment, you are going to create a foundation for life. Absolutely. Not just for yourself, but a legacy for your family, for your children, and their children’s children.”

The website for this coming Saturday’s Herbalife International Distance Race Triathlon urges attendees to “stop by the Herbalife booth today to learn how to use their products as part of a healthy training regimen!”

How many of the mothers and fathers who stop by that booth will Herbalife manage to ensnare, playing upon those loving parents’ desire to nurture and protect their children, to create a “legacy” for them? How many of those kids will tumble into poverty, as their unwitting parents pour hard-earned savings into the Herbalife scheme?

Taken as a whole, the “Malibu Triathlon”— of which the Herbalife race is just one part— has much to recommend it. The event raises money for Children’s’ Hospital Los Angeles. It brings together people of all stripes to swim, run, and bike at one of the world’s most spectacular meetings of land and sea.

All that needs to be done to make the Malibu Triathlon a wholly positive endeavor is for Herbalife to get dropped as a sponsor. The problem is that the event’s for-profit producer, Michael Epstein Lifestyle Sports Marketing, won’t do it—and wouldn’t do it last year when we first wrote about all this.

Despite Michael Epstein’s refusal to drop Herbalife, the Los Angeles County Board of Supervisors are giving him a $95,000 discount on the standard fee charged for the use of County beaches like Zuma. Why don’t the Supervisors make that discount contingent upon Epstein dropping Herbalife?