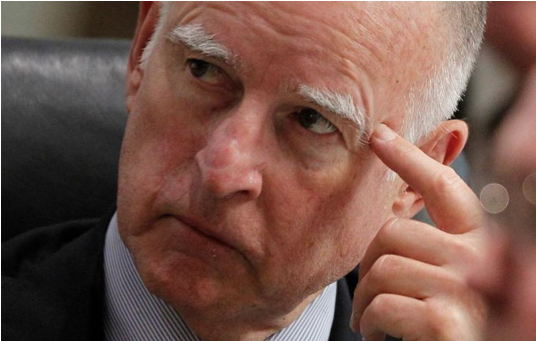 POLITICS--As stated in my last CityWatch article, we've got a lot to do with respect to transportation, not the least which includes a rapid transit system that has both east-west and north-south lines...and a DIRECT LAX-DOWNTOWN line that is being avoided because of political correctness and downright stupidity.

But included in the list of "to-do's" in preparation for the 2028 Olympics is to lose Jerry Brown.  He may have done a bit of good, to which he deserves a lot of credit, but he also leaves a lot of "Brown messes" to which his successor will be obligated to clean up.

An amazing rapid transit system is in store for LA City and County is in store for us to build with Measure M transit project money, but so much more could be had with a willing partner from Sacramento.

The California High-Speed Rail (CAHSR) project was one that has some significant merit...it if it were aligned with meritorious upgrades that would allow for a cheaper, cost-effective and fast rail transit system that also aligned with long-overdue Metrolink, Caltrain, and Amtrak upgrades in California.

Anyone who's ever ridden or used these lines know they've got considerable potential and already allow for an alternative to our freeway system.  However, the CAHSR project did not get promoted to taxpayers and voters based on what it should have been:  a higher-speed rail system speeding through areas statewide at over 100 mph.

Instead, the project was built on a big LIE that promoted comparable speeds to airplanes rather than with cars.  By and large, people don't like to be lied to...especially if they have to shell out tens of billions of dollars for a project that could be built cheaper and/or more cost-effectively, and with less environmental impact, than the current CAHSR project.

Would voters favor a similar but more cost-effective system that:

1) Threw more money at Union Station/transit hubs in San Francisco, Los Angeles, and other major cities throughout the state to allow for greater efficiency and frequency of service?

3) Funded and expedited a subway to connect the San Fernando Valley with the Wilshire Subway, Expo Line, and LAX to provide an alternative to the I-405 freeway?

4) Partnered with the private sector to connect Las Vegas, Disneyland, and San Diego with a California Amtrak/Metrolink/Caltrain system that pushed for cost-effective (and energy conscious) speeds  of 100-150 miles per hour instead of a cost-ineffective, energy-gobbling/inefficient system that pushed for unsustainable and unrealistic higher speeds?

Yes to all of this, of course, and taxpayers would probably gladly pay tens of billions of dollars for a system that prioritized the right projects first, and not place the cart before the horse just to please a Man Named Jerry Brown.

There's a reason or three why the CAHSR project keeps hitting roadblocks in the California court system, and it ain't because those courts are too conservative/anti-rail.

Furthermore, it's damned hard to fund a transportation/infrastructure system when the budget can't be balanced because our state isn't promoting a middle class.

Oh, sure, there are quite a few millionaires and billionares who can help us in a pinch, but if we REALLY want to have proper budgets and local/state economic development, a middle class with decent wages has to be nurtured and not trampled on.

And by "middle class", that means we include those in the private sector as well as the public sector, and we stop ignoring the economists whose collective hair is on fire because of our public sector costs (both salary and pension) that's killing our present and future.

In his own way, Jerry Brown is a very religious man.  He lives personally in a rather spartan lifestyle, compared to most governors.  However, it's not just religion but economics that will get us through our current crises.

And just because most of the Legislature slept through economics classes and training doesn't mean that all the economics they're ignoring isn't TRUE.

You want a lovely, first-rate 2028 Olympics?

Then we have to stop twiddling our thumbs and consider what improvements and corrections our next Governor--be he/she a Democrat or Republican--will do to correct the messes left by our current Governor and Legislature.