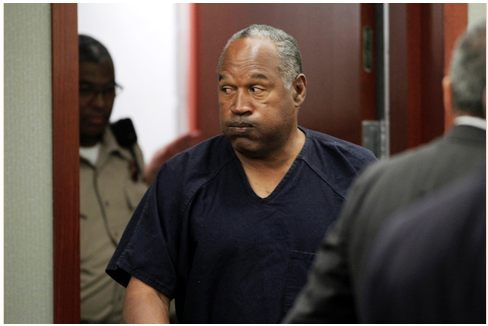 URBAN PERSPECTIVE-O.J. Simpson won’t go away. I posed the question on my Facebook page “Should O.J. be paroled?” It drew an avalanche of responses. Even while respondents hotly protested they didn’t care, they still debated, raged, and fumed on the page about him. He still touches a sore nerve.

There is, and never will be, any proof that Simpson really served 9 years of a 9 to 33- year sentence, not for robbery, kidnapping, and weapons charges, but for murdering Nicole Simpson and Ron Goldman. But whenever the subject of Simpson and his Nevada conviction and sentencing comes up more than a few adamantly believe that’s why he’s really went to prison. He’s didn’t. Simpson went to prison because the charges were serious.

Was he overcharged by a DA with a sneaky eye on Simpson’s walk in the murder case? Maybe, but the sentence slapped on him fit within the legal parameters of punishment for the three serious offenses he was convicted of.

This should be history, and the decision whether to grant him parole appeared to be based on that history. The Nevada pardon and parole laws are clear on this. It considers these factors: a reasonable probability that the prisoner will not commit further crimes, the release is compatible with the welfare of society, the seriousness of the offense, and the history of criminal conduct of the prisoner. Simpson was a model prisoner and therefore meets and exceeds the criteria for release. Even Clark County DA Steve Wolfson who prosecuted Simpson said he deserved to get out. It would be the wildest stretch to think that Simpson at age 70 would embark on a crime spree when released.

So, Simpson deserved his release. It did a lot to allay the notion that the law is excessively harsh, and vindictive toward Simpson because of his murder acquittal. It showed that parole boards can be fair, impartial, and uphold their own rules for release of a prisoner.

Simpson’s release matters for another reason. His acquittal on double murder charges more than two decades ago still sticks in the craw of much of America. The needle of bloggers and legal pundits who still furiously debate whether Simpson deserves parole is stuck hard on that point. They reflect the feeling of many. If Simpson had served every day of his lengthy sentence with even the faint possibility of walking free that would not be good enough for them.

From the day that he beat the double murder rap and walked out of a Los Angeles court, his ill-gained notoriety and perverse celebrity virtually guaranteed that the legal hammer would drop especially hard on him at the first whiff of criminal wrongdoing. There was no chance that given the savage public mood toward him that he would get the benefit of the doubt on any future charges against him. He, of all people, should’ve known that.

Even many of Simpson’s one time black supporters who passionately screamed that he was the victim of a biased criminal justice system in the LA murder trial cut and ran after the Las Vegas verdict. There was only a bare peep from them that the Nevada conviction had any racial taint to it. Simpson and his attorney’s complaint that prosecutors massaged and twisted jury selection to insure a non-black jury drew barely a yawn in the press and legal circles.

Simpson didn't invent or originate the oft-times ugly divide in public opinion about celebrity guilt. It has always lurked just beneath the surface. But his case propelled it to the front of public debate and anger. The horde of Simpson media commentators, legal experts and politicians who branded the legal system corrupt and compromised also fueled public belief that justice is for sale.

Simpson's acquittal seemed to confirm that the rich, famous and powerful have the deep pockets to hire a small army of high priced, high profile attorneys, expert witnesses, experts, and investigators who routinely mangle the legal system to stall, delay, and drag out their cases, and eventually allow their well-heeled clients to weasel out of punishment.

Even when prosecutors manage to win convictions of, or guilty pleas from celebrities, their money, fame, power, and legal twisting often guarantee that they will get a hand slap jail sentence, if that.

Whether Las Vegas prosecutors did indeed grossly overcharge him, it didn’t stop the chatter that a killer was finally getting at least some of his due. Few others rushed to his defense and blamed the steep charges on a callous and unforgiving criminal justice system.

Despite what one thinks of Simpson, he’s served his time and paid at least that part of his debt to the justice system. If justice is to be served then he deserved to be free. That’s the way the system is supposed to work and it was, as Simpson was, on trial in the Nevada parole room.

(Earl Ofari Hutchinson is an author and political analyst.) Prepped for CityWatch by Linda Abrams.