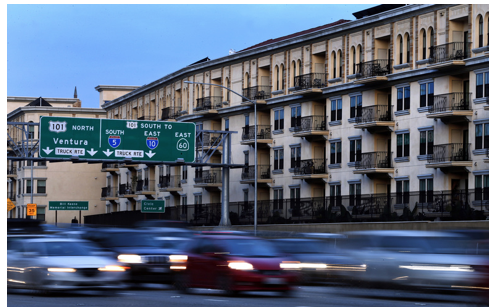 A disturbing new LA Times investigation of Mayor Garcetti's embrace of Black Lung Lofts has laid open a system of buck-passing and internal disarray, with the Mayor defending freeway-adjacent housing as legally untouchable because it's "in the pipeline."

Black lung lofts are apartments built within 500 feet, or about a block, of a freeway, where high numbers of children end up with lifelong lung damage, and serious health problems increase.

USC researchers and others have proved those facts definitively.

Mayor Eric Garcetti is dissembling about why he continues to wave off the growing health crisis, and championed the construction of/approval of 4,000 more of these dangerous units in 2015 alone.

The Mayor's political appointees on the City Planning Commission have repeatedly placed this housing "in the pipeline," to then be repeatedly rubber-stamped by the City Council.

More than that, Mayor Garcetti's commissioners, and his City Planning management have repeatedly recommended financial favors — known as "spot zoning" — that encourage developers to build black lung lofts on land where housing is flatly prohibited by Community Plans, Specific Plans or other zoning protections.

Mayor Garcetti was warned nearly a decade ago by USC researchers, when he was City Council President, that the City must stop approving housing next to freeways. Under Garcetti, the City Council ignored the seminal USC Children's Health Study.

In March Garcetti told the LA Times, "he opposes any restrictions on how many homes can be built near freeways and thinks that improving air-filtration, building design and tailpipe emissions are a better way to reduce risks to residents."

What studies is the Mayor reading?

We urge the Mayor to come clean about his wrongheadedness on black lung lofts, in the wake of Sunday's LA Times troubling new revelations, including:

-- The Mayor has touted a recent Building and Safety requirement that air filters be installed. But nobody at City Hall was asked to monitor whether developers obey.

--  Air filters lose much of their benefit unless an apartment's heating, AC or ventilation is running "at all times, with all doors and windows closed" -- a virtual impossibility.

-- Garcetti has not communicated to people under him that it's a health crisis. A Building and Safety spokesman told the Times, regarding air filters, "it would be counterproductive to document every little thing that we approve."

-- The filters required by LA are criticized by researchers as failing to stop toxic gases.

According to top researchers, there is no way to ensure the health of people, especially children, who move to the housing the mayor, City Council and City Planning are allowing to be placed within 500 feet of freeways.

A decade later, in the spring of 2017, researcher Scott Fruin of USC's Keck School of Medicine, told a teleconference of LA journalists that top researchers had tried to get serious action from Los Angeles City Hall for years.

But as Mayor, Mr. Garcetti has instead ratcheted up a system of special favors for developers, to assure that such housing has exploded along the freeways.

Although the Times story published today did not delve into this issue, many of the 4,000 new units approved in 2015 required a Zone Change, General Plan Amendment, or other special zoning favor.

"Mayor Garcetti's comment to LA Times reporters, that he has directed city staff to 'look into how LA zoning can be changed to protect the public health,' is a shame to see," said Coalition to Preserve LA executive director Jill Stewart.

"Is the mayor suggesting to the LA Times that city staff can somehow stop the Mayor, the Planning Commission and City Council from supporting spot zoning next to freeways?"

One of the most recent approvals was Clarendon Street Apartments, luxury housing to be erected 60 feet from the 101 Freeway. The city showered the developer with lucrative favors, letting him ignore local zoning, the Community Plan, and the Cahuenga-Ventura Boulevard Specific Plan, all of which ban housing on the site.

The City should not allow developers to build new housing within 500 feet at a minimum of a freeway, and they should institute a mandatory notification system in which developers and landlords must inform tenants of freeway-adjacent health hazards.

(This perspective was provided by Preserve LA.)