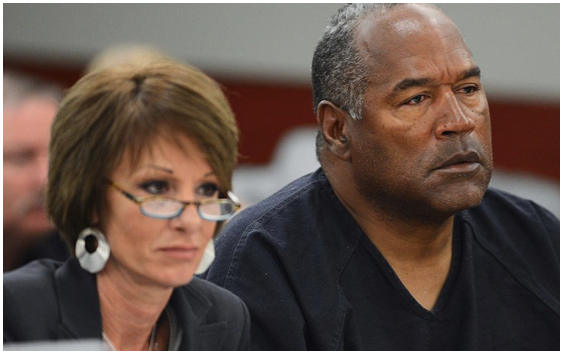 WHAT THEY’RE SAYING--The district attorney who put O.J. Simpson behind bars believes the former football star will win parole at his hearing later this month.

David Roger won convictions against Simpson in 2008 for robbery and kidnapping in Clark County, Nevada.

Simpson is scheduled to meet with the Nevada Board of Parole Commissioners on July 20.

Assuming things go his way, Simpson could be back on the streets by October.

Roger, who is now retired, thinks that’s likely to happen.

“The guy did a lot of time on a robbery charge, I expect he’ll probably be paroled,” Roger told the New York Post.

“Assuming he didn’t do anything bad on the inside, I think nine years is a pretty good stay for his charges.”

Roger emphasized that if Simpson is freed, he will still be on parole and would “have to toe the line” with parole officers.

He added, “But I don’t know if granting him parole would be out of line here.”

Simpson, who turns 70 on Sunday, was given a 33-year sentence for burglary and kidnapping charges related from a 2007 attempt to recover sports memorabilia from two collectibles dealers in a Las Vegas hotel room, according to ABC News.

Roger told the Post that Simpson turned down a plea bargain of 2.5 years, saying he would only serve a year.

In an amazing coincidence, Simpson was convicted 13 years to the day after he was acquitted for the 1994 killings of his ex-wife Nicole Brown Simpson and her friend Ronald Goldman.

(David Move posts at Huff Post  [[huffingtonpost.com]] … where this report was first posted.)