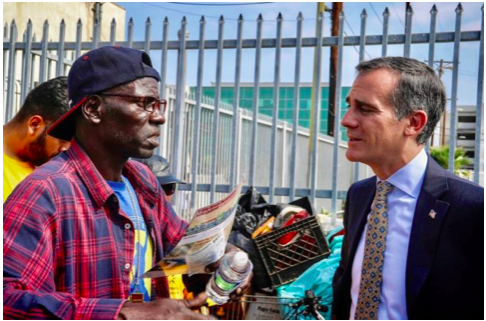 AT LENGTH-It is perhaps far too symbolic that Councilman Joe Buscaino will have his swearing-in ceremony for his second full term representing the 15th Council District at the reopening of Ken Malloy Harbor Regional Park and Machado Lake on June 17. It’s going to be a very fun family day with lots of activities and performances. Everyone is welcome, except the homeless. It only cost $130 million in renovations, plus the eviction of Reggie the alligator and some 167 homeless souls, considered “invasive species,” and neither will be welcomed back.

This is a classic example of the city spending money to solve one problem, while ignoring a much larger problem, holding a ceremony to celebrate the success of one and pretending the second had nothing to do with the first.

Several years back when the city did an assessment of Harbor Regional Park, the Recreation and Parks Department informed the council office that there were homeless people living amongst the backlands of the marsh and trash. They were out of sight and out of mind from the thousands of commuters traversing Anaheim Street heading to the Harbor Freeway. That is, until they were evicted with no place to go but the sidewalks of surrounding neighborhoods.

Buscaino and the city have spent the past two years chasing these folks around from one spot to another at a cost of about $35,000 per homeless sweep.

In the eyes of some, the city has stepped to the plate to address the homeless crisis by solving the housing shortage with Measure HHH. As a sign of progress, those same folks would point to the coordination between Los Angeles Police Department, Harbor Interfaith Services and the Los Angeles Homeless Services Authority in regularly deploying “quality of life units” to connect homeless people to services, while clearing out encampments.

Yet, on May 31, Mayor Eric Garcetti had the grim honor of announcing that the January homeless count revealed a 23 percent increase from January 2016, after all that’s been promised, said and done.

This was announced two weeks after the LA City Council signed off on the mayor’s $9.2 billion city budget — a budget that is being drained by escalating pension obligations and the rising number of legal settlements.

“Voters put their trust in us by passing Measure H and Proposition HHH, to deliver the housing and services that people on the streets desperately need,” Garcetti said. “But we can only solve this crisis by deepening our investment in affordable housing.”

Right there is the problem. The only solution the city sees is to build more housing at some point in the future. But the crisis is now! And no one in city or county leadership is addressing this as a “what to do now” issue.

Long before Buscaino stepped into this mess with his feckless Homeless Task Force and his useless town hall meeting, and before Los Angeles City Council even formed a Homeless Committee, the concerned citizens of San Pedro Harbor area were meeting with then-state Sen. Isadore Hall to plan a rapid emergency shelter program.

This would have addressed the right-now problem for the thousands who are without shelter or living inside their cars. The city could still do this at a much lower cost by using some of the 9,000 unused city owned properties to locate safe and sanitary emergency shelters.

If you are still shocked and appalled by the plight of 58,000 people living on our streets and under our bridges, then you must demand immediate solutions, not more talk.  By this, I don’t mean more homeless sweeps that clean up the sidewalks for a day or two. I’m talking about an all-hands-on-deck and get every city and county department involved.

As the city addresses the LA River project and waterfront developments, there must be remediation and space allotted for emergency homeless centers. There should be one in every council district throughout the City of Los Angeles.

Not only will this be more cost effective than what is currently being practiced with the enforcement of LAMC 56.11. It is also the more humane policy. Some would call it the “Christian” thing to do. Using existing land and buildings to effectuate a now solution would be similar to a crisis response that we would expect from government if there were just 5,800 people displaced by a natural disaster. Tell me that the Red Cross, the California National Guard, FEMA or a dozen other alphabet agencies don’t have the tents, portable sanitation or medical supplies to rapidly respond. Tell me how the multitude of nonprofit and religious groups would not sign on to a call to action to address this crisis.

When you get down to the root of the problem, what we have is a failure of leadership. The core issues causing this are much deeper. High levels of poverty, growing income disparity, slow job growth in relation to population increases, inflated real estate prices and education levels are not keeping pace with either technology or market demand.

Yes, it seems daunting, but one part of this complexity that I ran across the other day is an economic analysis report entitled, Industry and Labor Market Intelligence for the City of Los Angeles. It was released in 2013 by the Los Angeles County Economic Development Corp. To my surprise, on the issue of education levels for CD 15, the largest percentage of residents 25-plus years of age, 32.9 percent, didn’t even have a high school diploma. High school graduates without a college degree were the next highest at 26.4 percent. That’s almost 60 percent of our resident workforce that never went to college or a trade school — this is the population that will become more vulnerable to homelessness in the years to come.

Even with the one-year free tuition at our junior colleges, enrollments are down at Los Angeles Harbor College even while high school graduation levels are slightly up. The task of stemming the tide of homelessness is daunting, but Garcetti, Buscaino and the rest of the council do have it in their power to provide emergency shelters now while supporting longer-term goals tomorrow. They all just need act as if this is a crisis and not just a slow-motion train wreck.

(James Preston Allen is the Publisher of Random Lengths News, the Los Angeles Harbor Area's only independent newspaper. He is also a guest columnist for the California Courts Monitor and is the author of "Silence Is Not Democracy - Don't listen to that man with the white cap - he might say something that you agree with!" He has been engaged in the civic affairs of CD 15 for more than 35 years. More of Allen…and other views and news at: randomlengthsnews.com.) [[[    http://www.randomlengthsnews.com/2017/06/no-solutions-rising-tide-homeless-people/  ]]] Edited for CityWatch by Linda Abrams.