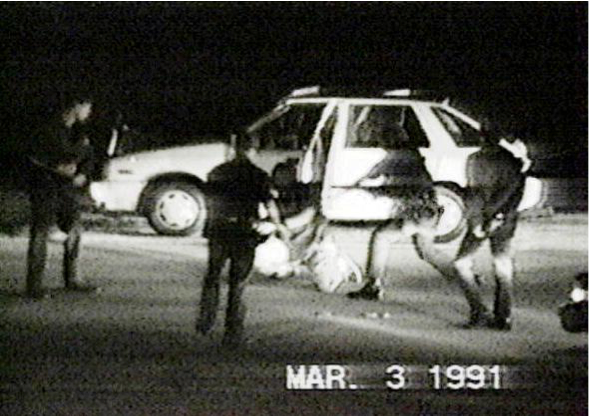 AT LENGTH-It was some 25 years ago when I stepped into the bar at Ante’s Restaurant looking for Tony Perkov only to find my nemesis Rod Decker, a former Los Angeles Police Department officer. Back then, he was a vocal racist with whom I had exchanged more than a word or two regarding his casual use of racial epithets. That night television screens across the United States displayed the police beating of Rodney King.

Walking into Ante’s, I was taken by surprise. Decker, sitting at the bar with his back to the door, could see me walking-by in the mirror behind the bar. Before I could say anything, he turned around and said, “No lo contendre, pardner,” in an affectation of Spanglish. “That was a completely unrighteous bust.”

This ended a months-long conflict that started at this very same bar with me standing up one night after one of his racist rants. I threw my hat on the bar and told him in no uncertain terms, with a helping of Anglo-Saxon swearing, that I wasn’t going to put up with his shit anymore! There was dead silence as everyone looked into their drinks and pondered my words.

The moral to this story is that words do hold power and they often divide us, but in the end, actions — our own or others’ — speak louder in defining us and occasionally bringing opposites together.

The past year in the political fervor ramping up to the November presidential elections, two of San Pedro’s neighborhood councils elected majorities supported by the Saving San Pedro Facebook activist group opposing the homeless with very disparaging postings. One of the first actions they took after gaining power was to institute the obligatory Pledge of Allegiance at the beginning of every meeting.

I objected on various grounds -- not the least of which being the “under God” portion, which was not part of the original pledge, and which now can be argued separates rather than unites Americans, making us not so “indivisible.”

Subsequently, both Coastal and Central San Pedro Neighborhood Councils have become so divided that they are dysfunctional and have not addressed the homeless crisis at all. Rather, they have spent an inordinate amount of time battling amongst themselves over petty issues, such as Neighborhood Purpose Grants, and battling the Department of Neighborhood Empowerment over meeting dates and places and Brown Act violations. Basically, the inability to run a meeting or collaborate with others on their own councils stands in their way. This sounds a lot like Congress, doesn’t it?

At one point, the former president of Coastal San Pedro Neighborhood Council, after he was forced to resign, posted on Facebook that city funding of neighborhood councils was a waste of taxpayer monies and the city should use the revenue for fixing sidewalks.

Clearly, this is the vision of many people who gain political position for the first time and are shocked to realize that governing is not the same thing as having an uprising. This is akin to what is happening to Trump and his supporters. This is also the problem of people who are constantly opposing whatever it is they are against and never offering a positive solution to the issues at hand.

This brings me back to the issue of Los Angeles City Hall, the homeless crisis and the Democratic leadership of the city.

The liberal leadership of the city, the state and even those in Congress have all become united against everything President Donald Trump has campaigned on: the immigration ban, the wall and deportation orders; rolling back EPA regulations; and the reform of the national health care law. But what you haven’t heard from them are alternative solutions.

At City Hall in Los Angeles, they have proposed and passed a $1.2 billion bond to address housing for the homeless while at the very same time amending Los Angeles Municipal Code 56.11 to shorten the legal notice time from 72 to 24 hours on homeless encampment sweeps. Has this actually solved anything or just exacerbated an already bad situation? The homeless population hasn’t declined even though the city and the county continue to throw money at the issue.

It’s a fine act of resistance to oppose Trump’s threats against sanctuary cities and file lawsuits against his blanket executive orders on Muslims. I actually applaud these actions.

Yet, the more Trump pushes his agenda, the more he drives centrist Democrats into taking measures to resist. However, most of the liberal electeds are calling upon activists to do their bidding for them, while at home, they defend an uncertain status quo. A significant uprising against all things Trump in Los Angeles just might also take down City Hall’s power structure as the city’s 35 communities have grown tired of being treated as disempowered vassals of a city, while their needs go unmet.

There is no glue that keeps this city or perhaps even this nation “indivisible” as we the people take some great liberties in being divisive! There is nothing in our Constitution or charter that says we must be united, except in name only. We’ve even fought a Civil War and had many civil uprisings to prove this point. The riot 25 years ago in LA is still referred to in South Central as an “uprising.”

Yet, it is a very good thing that Mayor Eric Garcetti comes out with this announcement on Trump’s threats to our city:

Today’s ruling by Judge Orrick [blocking Trump’s order] is good news, and reminds us that people’s rights transcend political stunts. The Constitution protects cities’ right to create humane, sensible policies that keep our neighborhoods safe and our communities together. It is time for the federal government to stop attacking cities and scapegoating immigrants, and begin focusing on the hard work of comprehensive immigration reform. I will keep working to defend the rights of all our residents — including immigrants — and fighting to protect our own federal tax dollars, which Angelenos want to invest in keeping their families safe and our city strong.

It would be consistent with this statement if the mayor felt the same way about protecting our rights against the abuses of city government. However, it would be quite another thing to see Garcetti leading a march on the federal building with the other liberal council members showing solidarity with the grassroots resistance and then proposing the visionary reforms that were first enunciated in 1944 by President Franklin Delano Roosevelt in his Second Bill of Rights:

We have come to a clear realization of the fact that true individual freedom cannot exist without economic security and independence. Necessitous men are not free men. People who are hungry and out of a job are the stuff of which dictatorships are made. In our day these economic truths have become accepted as self-evident. We have accepted, so to speak, a second Bill of Rights under which a new basis of security and prosperity can be established for all — regardless of station, race, or creed. Among these are:

America’s own rightful place in the world depends in large part upon how fully these and similar rights have been carried into practice for all our citizens. For unless there is security here at home there cannot be lasting peace in the world.

If and when the Democratic leadership decides to stand up for its historic core values both here in Los Angeles and in our legislatures, that is when our nation has a chance to become united again and the Democratic Party can find its soul.

Until then, they will look more like Republicans arguing over healthcare reform than a party prepared to govern for the economic security of the people.

(James Preston Allen is the Publisher of Random Lengths News, the Los Angeles Harbor Area's only independent newspaper. He is also a guest columnist for the California Courts Monitor and is the author of "Silence Is Not Democracy - Don't listen to that man with the white cap - he might say something that you agree with!" He has been engaged in the civic affairs of CD 15 for more than 35 years. More of Allen…and other views and news at: randomlengthsnews.com.) Prepped for CityWatch by Linda Abrams.