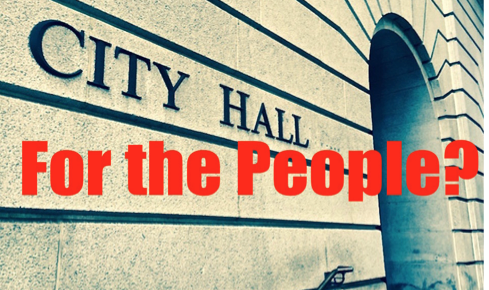 CORRUPTION WATCH-While everyone talks about Measure S in terms of planning, the reality is that Measure S is less about development and planning and writing EIRs than it is about something else: Measure S is about stopping corruption at LA City Hall.

(1) A developer buys a piece of land on which he wants to build a large project.

(2) The developer pays money to the Mayor and the councilmember where the project will be located.

(3) The Mayor and city councilman override all the laws that say the Project is illegal.

(4) Later, the Mayor and city council usually give the developer millions of tax dollars which can be 10 to 20 times greater than the bribes.

As the LA Times wrote, developer Samuel Leung gave Garcetti’s “charity,” $60,000 and Garcetti lessened the number of votes necessary for Leung’s project to be approved. Leung also gave hundreds of thousands of dollars to the councilmembers. The zoning obstacles disappeared.

As the LA Times wrote, developer Rick Caruso gave Garcetti’s “charity,” $125,000 and his project got the desired approvals.

The CIM Group’s project at 5929 Sunset shows the later stages of the corruption dance. The City then gives the developer millions of dollars. As CityWatch  showed, Garcetti gave $17.4 million to a project which violated a court order.

The many ways to pay bribes exceed the scope of this article. Years ago the bribes seemed smaller. Developers would get employees and relatives to make campaign contributions to the mayors and councilmembers and then the contributors would be paid back by the developer. Try to prove that Larry Bond’s gift to his sister was not a birthday present as opposed to repaying her for her donation to Tom LaBonge?

Some councilmembers had consulting jobs in foreign countries which they would visit every so often. We know about Swiss banking laws, but few people know that Luxembourg is the money laundering capital of Europe. Many councilmembers and superior court judges are very friendly with Luxembourgers living in Los Angeles.

A favor today can be paid back via “Citizens United” and no one gets to see who is paying the money. The Citizens United case serves one purpose – to facilitate political corruption.

How the City Repays the Bribes

The corruption does have an evil beauty about it. Many developers not only get their illegal projects unanimously approved (which is worth hundreds of millions to them,) but the City then gives them tens of millions of tax dollars. The private Grand Avenue Project in DTLA is getting $197 million from the City. In fact, the corruption is so well known, that China (who is also putting up $290 million,) refers to the Grand Ave project as a “government” project and therefore it cannot fail.

No matter what means a developer uses to buy the Mayor or a city councilmember, there is only one way the Mayor and city council can confer benefits on the developer: Spot Zone his property. If Rick Caruso’s property is not Spot Zoned to what he needs, his project remains illegal. It doesn’t matter how much money he forks over to Garcetti, Koretz or any other councilmember in order to receive unanimous approval. Without the Spot Zoning, his project remains illegal.

Because Measure S makes Spot Zoning illegal, there will be no reason for any developer to pay Garcetti one cent in bribes. Measure S prevents Garcetti and the councilmembers from doing jack for the developer.

The corruption behind Spot Zoning is not new. In 2006, former Director of Planning Gail Goldberg tried to stop it. She told then Councilmember Eric Garcetti that allowing developers to set the zoning they wanted was bringing disaster to Los Angeles. Gail Goldberg is out of her job as Planning Director, but Spot Zoning is alive and well.

Spot Zoning has wreaked havoc on LA because there is no planning. Garcetti and the LA City Council seem to have no regard for our Quality of Life. All that matters is how much loot they can pull in from developers. As a result, Los Angeles has fallen to the very bottom of the list of livable urban areas. The middle class is fleeing and employers are following them to other places in the country with less corruption. Even Chicago, the Windy City, has less corruption and is attracting new businesses.

This is why the Garcetti Lie Machine is operating overtime to deceive people into believing that Measure S stops all construction. Garcetti does not want voters to understand that Measure S only stops projects based on the bribery for Spot Zoning.

City Hall is desperate to prevent the voters from passing Measure S because it would kill the bribery at Los Angeles City Hall at a time when Garcetti needs to gather up as much cash as possible to run for CA Governor or U.S. Senator. Not only will passage of Measure S cut off the endless bribery, it will harm Garcetti politically. As long as his extortion-bribery racket runs, he is the hero who shovels billions of dollars to his buddies. But if Measure S passes, Garcetti will become political poison.

(Richard Lee Abrams is a Los Angeles attorney. He can be reached at: [email protected]. Abrams views are his own and do not necessarily reflect the views of CityWatch. He is not connected with the Yes on Measure S campaign.)  Edited for CityWatch by Linda Abrams.