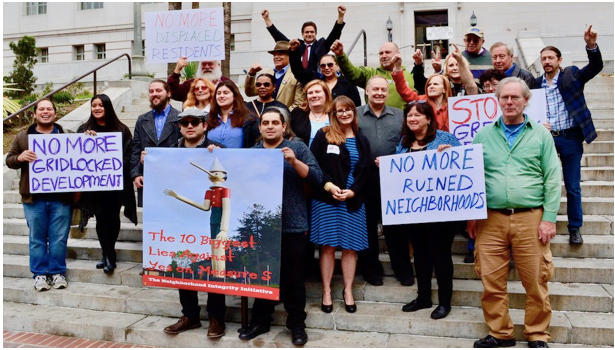 THE PEOPLE SPEAK--On March 7, Los Angeles residents get one last chance to assert their fundamental right to shape what our city becomes before our wonderful city of towns and villages is paved over by glass box mega-developments, the terrible traffic they cause, and the glut of empty $3,500 apartments nobody wants, now marching across LA.

Measure S, the Neighborhood Integrity Initiative, is the fix to this broken and rigged system at City Hall.

A “yes” on Measure S puts planning back in the planning department, dismantling the current system of backroom real estate dealing by City Council members -- 15 individuals who are utterly unqualified to engage in private and inappropriate "spot zoning" deals with some of the world's richest and slickest developers.

As the Los Angeles Times has repeatedly reported in recent months, elected leaders at City Hall are accepting huge amounts of cash, gifts and wining and dining from wealthy developers. Then, those same City Hall elected leaders are handing these same developers special exemptions from our protective zoning rules.

Winning an exemption from LA's height zoning rules, for example, can mean an instant, unearned, $20 million profit to a developer who suddenly is allowed by a councilmember to build 20 stories instead of 4 stories.

A single exemption from the General Plan -- those are granted by City Councilmembers to let a developer use the land for something that's entirely inappropriate and not allowed by the city's own laws -- can mean an instant, unearned $40 million or larger profit for that developer.

That's what happened when City Hall agreed to let a rich developer squeeze the Sea Breeze luxury housing project between a couple of noisy warehouses, a Houston-style approach to planning. Which is to say, no planning at all.

City Hall's gross misbehavior is at the heart of this system of free money, big money -- and corrupt money. Our City Council is selling its votes. They do so at the expense of all of us.

Funded largely by the Chamber and three billionaires -- the Lowy global mall kings of Australia, the multi-national skyscraper-building Kahn family of Miami, and the Lowes global resort kings in LA -- powerful lobbyists are running a cynical campaign designed to trick Los Angeles residents into voting against their own self-interest on March 7.

The billionaire mega-developers and their cronies know that they can’t beat us using the truth. So they’re saying, doing and spending whatever it takes to win -- at all costs.

Let's conduct some myth-busting here, with the understanding that the lies issued by opponents of Measure S are going to get much more extreme and out of this world.

According to their fantastical accounts, Measure S, the Neighborhood Integrity Initiative, would “stop the building of everything -- from affordable housing, to hospitals, schools, and parks.” We at Measure S even apparently view “new toilets” as over-development.

We also have a secret "housing ban" tucked somewhere in our back pocket. A Westside City Councilman and a Valley City Councilman are telling their constituents that we, ahem, "ban all development." (We got calls from people who were upset about being spoon-fed these obvious whoppers while meeting with the councilmembers.)

A Hollywood Councilman has been running around saying we will stop projects already underway (another ahem), and the mayor is flirting with trying to claim that LA's entire economy is teetering atop a coterie of rich land developers who must be allowed to break the zoning rules.

The Chamber of Commerce president, emboldened by this fake news from on high, illegally lied about Measure S in official ballot literature (Measure S is going to ruin the economy), as did a well-known economist who was paid to do so by the three billionaires. Both the Chamber president and the economist had to retract their lies, just last week.

As I wrote in the Los Angeles Daily News back in August, "Sadly, our measure also bans rainbows, outlaws donuts, and deports the tooth fairy."

And that will leave a lot of instant wealth for some of the world's richest developers sitting on the table, and crimp the fundraising ability of some of California's most cash-needy politicians.

The truth is that only about 5% of developers active in Los Angeles drive the actions of elected officials at Los Angeles City Hall, just as they own and drive nice cars.

The truth is, 95% of development will continue to flourish under Measure S, because Measure S is about working out the rules in a transparent setting with strong input from residents, then following those rules. And 95% of developers actually honor our local zoning.

The truth is that affordable housing will flourish under Measure S, because Measure S exempts from most of the city's zoning rules those developers who will build 100% affordable housing -- an exception that we ourselves carved out, due to the great need.

The truth is that Measure S does NOT halt any project underway, for any reason, even if it's one of the hideous glass boxes that is helping Los Angeles each day look more and more like Charlotte, NC.

Instead, think of Measure S as "the gift of time for our City Council and mayor."

Suddenly, instead of spending hundreds of hours cutting backroom, closed-door deals to let developers get around the zoning rules, our city leaders can spend those recaptured hours doing right by the residents and taxpayers. What at treat that will be.

The City Council and mayor can spend this recaptured time figuring out how to end the wanton destruction of 1,000 units of affordable rent-stabilized apartments by developers every single year. So far, 22,000 irreplaceable, sound, older low-rent units have vanished since 2000.

Suddenly, on March 7, our elected leaders will have loads of new free time to actually create a plan for spending the badly needed bond money we voters approved in November to build homeless housing with support services.

(At a city hearing a few weeks ago, a city official let slip that, ahem, they are already toying with requiring that only 50% of the housing financed by we taxpayers provide the full shelter and services City Hall promised in the bond measure.)

Suddenly, instead of spending hundreds of hours being lobbied and wined and dined by developers seeking ways around our rules, the City Council and mayor can spend it addressing our exploding water mains, our cracking sewer mains, our bodacious potholes and our long-promised parks.

Our opponents know they can’t win on March 7 on the merits. They know that voters want affordable housing and reasonably priced housing, not the City Council's luxury rental housing glut with its 15% to 20% vacancy rates. Our opponents know voters want less gridlock, not worse traffic backing up as far as three miles from absurdly oversized projects.

And most frightening to our misbehaving status quo, they know we’re onto them. Voters have realized that City Hall is rigged, thanks in no small part to recent coverage by the Los Angeles Times, and also thanks to our own stories by award-winning journalist Patrick Range McDonald at VoteYESonS.org.

As I wrote in the Daily News, "Voters aren’t going to stand by as the character, culture, and connectivity of our city gets washed away in a sea of unwanted and unaffordable luxury housing mega-developments."

(Jill Stewart, a former journalist, is campaign director for the Coalition to Preserve LA, sponsor of the Neighborhood Integrity Initiative.) Prepped for CityWatch by Linda Abrams.