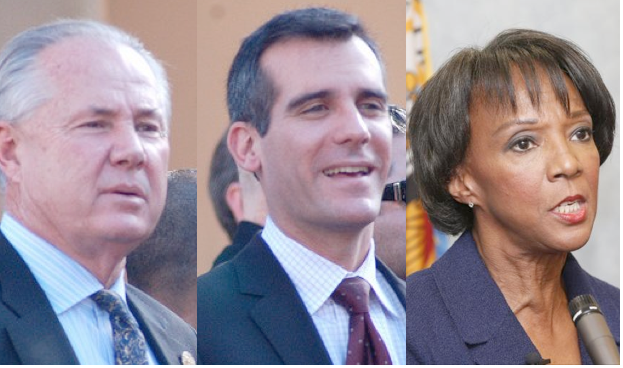 The Los Angeles County’s District Attorney’s Office is an entirely different animal. The District Attorney is under an affirmative duty to investigate possible criminal behavior and then to prosecute people if and when he or she finds probable cause that criminal behavior has occurred. The D.A.’s duty to prosecute extends to the Mayor of the City of Los Angeles and to all City Councilmembers.

For years, the Los Angeles County’s District Office has failed to prosecute any of the criminal behavior in the Mayor’s office or that of any City Councilmember, with the exception of City Councilmember Alarcon who allegedly had his residence in the wrong part of the San Fernando Valley. It is interesting to note in passing that after Councilmember’s Alarcon’s conviction was set aside, the District Attorney has decided to re-try him rather than use her leverage over his dubious residency record, in order to obtain his cooperation regarding the various criminal behaviors of the mayor and other councilmembers when Alarcon was councilmember for District 7. It is also interesting that the D.A. has been silent about Council President Herb Wesson’s decision to declare himself temporary councilmember for District 7 due to the resignation of former CD7 Councilman Felipe Fuentes – even though Wesson owns no home anywhere in the Valley.

What did the LA County District Attorney know or should have known since 2001, when Eric Garcetti first took office? Any law enforcement agency has powers far greater than any citizen or any news organization. The D.A. can convene a grand jury to question possible witnesses. If they lie during an investigation, witnesses can be criminally charged. I call this the Martha Stewart Rule. Her prison term was for lying to the SEC, not for insider trading.

Also, anyone who watches Law and Order or any other TV crime show knows that law enforcement “flips” underlings to testify against the bigwigs. There are hundreds of staffers for Garcetti and for the various councilmembers over the last decade who have enough information to criminally prosecute virtually every single one of them.

We will only focus on a few of many instances in which enough information has seeped out to the public and the various District Attorneys looked the other way, to show that the inaction by the LA County District Attorney’s Office is a major reason that Los Angeles City Hall is a Temple to Criminogenics.

CityWatch and other news sources covered much of this story. Due to his use of developer appraisals, Steve Ullman, friend of CM Eric Garcetti, was not a favored person at the Community Redevelopment Agency [CRA/LA]. When he wanted to sell his property at 1601 N. Vine to the CRA/LA, which is part of the City of Los Angeles, it was decided that Hal Katersky would front as the property’s owner. (When later questioned about who actually owned 1601 N. Vine, CRA/LA said, “Steve Ullman” and not Hal Katersky or his business Pacifica Ventures.)

This appraisal fraud was brought to the attention of the District Attorney and was the subject of hearings at City Hall in 2010 and 2011 when Garcetti wanted the City to re-sell the property to the developer for only $825,000. People had made a Government Code § 6250 Request for Public documents to the CRA/LA, which did not disclose the lower $4 million appraisal. One day, however, while a person was at the CRA/LA building, someone from CRA/LA came to this person and said, “Here, you want this. Leave now.” Once outside, this person opened the envelope that contained an unknown appraisal for 1601 N. Vine for only $4 million.

The public widely publicized the fraud, but the DA did nothing. On October 21, 2010, Ron Kay LA published “UPDATED: Demand for a Criminal Investigation of the CRA Deal for 1601 N. Vine St. It was also mentioned in CityWatch on June 25, 2010, “CRA Has LA’s Council in a Mind Wrap.”

In 2010, the City said that no one who knew anything about the transactions back in 2006 was still around. That was a bold lie. There was Eric Garcetti, CRA/LA’s Tom Breezy (who seemed to have gone into hiding,) CRA/LA’s John Prefitt (who was then working for the City of Downey,) the owner Steve Ullman, Garcetti’s aid and then CRA/LA employee Allison Becker, and project front man Hal Katersky. Since other workers at the CRA/LA knew enough to slip the hidden $4 million appraisal to the public, there had to be a host of other CRA/LA employees as well as other members of Garcetti’s council staff who knew. Did the District Attorney bother to question a single person? There was far more than probable cause to indict those people who committed appraisal fraud on the City of LA. Yet, nothing was done.

From all evidence, this $12 million “Bait and Switch Scam” over the Hollywood Sign’s imminent destruction was run out of Tom LaBonge’s Office (CD 4), while Garcetti was CD 13’s councilmember and City Council President.

One could say that this scheme exemplified how the road to hell is paved with good intentions. On the flip side, LaBonge involved Hollywood school children. Is it wise to teach children that a criminal Bait and Switch scam is an OK way to make money?

LaBonge wanted to purchase the 140 acres of Cahuenga Peak, a barren peak to the west of Mt. Lee. As Hollywoodians know, Mt. Lee’s south slope is the home of the Hollywood Sign. For reasons which are not pertinent for this story, in 2001, shortly after 9/11, LaBonge had allowed Fox River Financial from Chicago to purchase Cahuenga Peak for $1.67 million despite the fact it overlooked the LAPD communications installation on top of Mt. Lee.

In 2010, LaBonge decided that it would be nice to spend $12 million to buy Cahuenga Peak as an addition to Griffith Park. The Peak still overlooked Mt. Lee’s telecommunications center and for Home Land Security reasons, it was non-buildable. No one has explained why property worth $1.67 million in 2001 was worth almost ten times as much in 2010, when we were in the depths of the real estate crash.

When LaBonge could not raise the $12 million to buy the property, the Save the Peak Campaign was born. The H Sign was draped with huge letters saying SAVE THE PEAK. The worldwide news story was that developers were about to destroy the famed Hollywood Sign and people had to donate money to Save The Peak as the only way to save the H Sign.

Even the Hollywood school children whom La Bonge enlisted in his Save the Peak campaign knew that the H Sign is not on Cahuenga Peak and that it was in no type of danger. People living in South Africa, Europe and Australia, however, did not know that this was a Bait and Switch fraud. The District Attorney knew about the fraud since it was well publicized and members of the public expressly complained to the DA about this scam.

La Bonge had photo-ops in front of the H Sign and Governor Schwarzenegger came and gave a speech about how much the Hollywood Sign meant to him and what an honor it was to help save it.

During the fiasco of Garcetti’s attempting to construct the Millennium Towers over the Hollywood Earthquake Fault Line, the key person at Los Angeles’ Department of Building and Safety was Raymond Chan. During this time, The Millennium’s law firm hired Raymond Chan’s son, who was a law student, to work as a “law clerk.” Hiring the son of the mucky-muck in charge of the Millennium’s earthquake assessment seemed a tad shady. Of course, the City found no earthquake threat. But, wait, it gets worse.

When the LA Times found that the law student son had made thousands of dollars of contributions to Garcetti’s campaign, people started asking where the kid got all that money. People suspected that since the law student son worked for the law firm, he was an illegal conduit from Millennium to its lawyers to the son to Garcetti.

At that point, Raymond Chan announced that he had given his son the money to make the campaign contributions to Garcetti. That diverted suspicion away from The Millennium. As we learned in the LA Times Sea Breeze article, relatives funneling money to politicos is as illegal as developers funneling money. Raymond Chan was later promoted by Garcetti. All the District Attorney had to do was walk into the Grand Jury room, slap down the LA Times and the other news article and say, “Indict this ham sandwich.” But oh no, nothing that might tarnish golden boy Garcetti.

It cost $625 million to construct the Hollywood-Highland Project and in 2004, the project was sold to CIM Group for only $201 million. That was a loss of $424 million; then the City made some sort of $30 million deal with CIM to subsidize the transformation of the new Kodak Theater, which had been expressly designed for the Academy Awards, so that it would be appropriate of Cirque du Soleil. Thus, the overall loss on the Project approached $500 million.

From the District Attorney’s perspective, the important element was not whether the original developer lost close to half a billion dollars, but how much money did the City of Los Angeles (including its Community Redevelopment Agency, CRA/LA) lose in the transfer of Hollywood-Highland to one of Garcetti’s most favored developers? There is good reason to believe that this deal cost the City $100 million. Who really knows, when the public is left to reading the tea leaves?

In June 2013, the Los Angeles County Civil Grand Jury found that when the LA City Council under the leadership of council President Eric Garcetti took millions of dollars away from the Los Angeles Paramedics, they knew that people would die and that people did in fact dies as a result of those budget cuts. As others proved, Garcetti based the under-funding of the paramedics on a false deployment report. Taking money away from paramedics with knowledge that people will die as a result is criminal fraud. It is no different than hiding peanut butter in food in a school cafeteria knowing that some kids have lethal peanut allergies. At the same time, the City was giving hundreds of millions of dollars to developers.

Has Garcetti fixed the situation? On November 3, 2016 a toddler choked on a grape at the LA Zoo and it took the paramedics 14 minutes to arrive. Six minutes of the delay seems due to the LA Zoo’s unwillingness to call 911, but it took the paramedics eight minutes to reach the zoo after the 911 call was made. Why doesn’t LA have paramedics stationed at the zoo like other cities? Although Garcetti and others know that the downsized paramedic workforce is causing needless death and this child has been turned into a “vegetable,” giving money to developers like the $17 million Garcetti gave to CIM Group for its project at 5929 Sunset is more important.

The Los Angeles District Attorney’s Office has likewise shown a conscious disregard for the life and safety of Angelenos. The District Attorney’s own June 2013 Grand Jury report shows that it knew that the “corruptionism” at LA City Hall was killing people and it did nothing.

(Richard Lee Abrams is a Los Angeles attorney. He can be reached at: Rickleeabrams@Gmail.com. Abrams views are his own and do not necessarily reflect the views of CityWatch.) Edited for CityWatch by Linda Abrams.