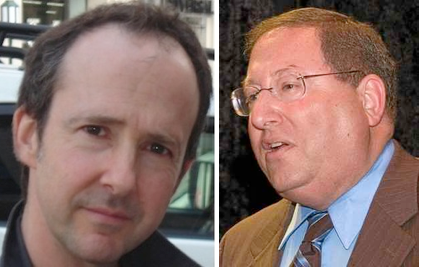 THE SNUB RUB--Ah, Council District 5’s so-called representative, Paul Koretz (photo above right), is at it again. As the Daily News reports.

Jonathan Weiss published a letter two weeks ago in the Los Angeles Daily News slamming the councilman’s leadership on the Westwood Greenway, a planned 800-foot park in Koretz’s district.

The park, first proposed by Weiss in 2009, would rise near the Expo Line’s Westwood/Rancho Park stop.

Weiss’s letter outlined his support for Jesse Creed, Koretz’s opponent in next year’s race for City Council District 5, because Weiss believes Creed would be better at getting projects completed.

Several days later, Koretz’s environmental deputy Andy Shrader sent an email to those involved in the Westwood Greenway project, notifying them of backing for the project from the Santa Monica Bay Restoration Commission.

Shrader also mentioned Weiss’ letter to the Daily News and said the Cheviot Hills attorney had “raked” the councilman “over the coals.”

“Mr. Weiss will no longer be invited to our meetings going forward, but I am happy to continue meeting with you all and look forward to seeing this project through to its fruition,” Shrader wrote.

In other words, don’t you dare criticize the ruler of your fiefdom, lest you be banished, even from a project that you yourself founded.

Maybe I’m just too sensitive, but I see this attitude as sufficient reason in itself to support Creed, whom I’ve met, and who would make a stellar council member if he carries out half of what he stands for.

Koretz, who presents as an affable teddy bear of a man, turns more literally bearlike when his position as king of CD5 is questioned.

Of course, compared to CD1’s lamentably entrenched Gill Cedillo, Koretz is a piker in pettiness. Both lords have arbitrarily cancelled safe streets projects in their districts, the North Figueroa road diet in Cedillo’s case, the Westwood Boulevard bike lanes in Koretz’s. Koretz refused to consider the Ryan Snyder plan, which retained all the car lanes and al the parking, and refused even to permit a study of the street, saying he would veto any and all changes.

But Cedillo did him one better, by singlehandedly cancelling a road diet that had been unanimously approved (by the entire pre-Cedillo city council), funded, and engineered and approved by LADOT. As it happens, the Charter of the city of Los Angeles states that agency-approved projects can not be cancelled by individual council members…but what’s a silly little point of law amongst cronies, anyway?

The election in districts 1 and 5 comes next March. Instead of complaining, vote the bastards out. Let’s try Jesse Creed in CD5. Let’s try Joe Bray-Ali (the sponsor of this blog) in CD1. And who knows? Now that CD7’s Fuentes has vacated his seat to become a big-time lobbyist, we may even get an actual human being to run for that seat too.

If we all get out and vote, we could create a City Councll that works for the city instead of its own fat egos … but it won’t happen without your help.

(Richard Risemberg is a writer. His current professional activities are focused on sustainable development and lifestyle. This column was posted first at Flying Pigeon.