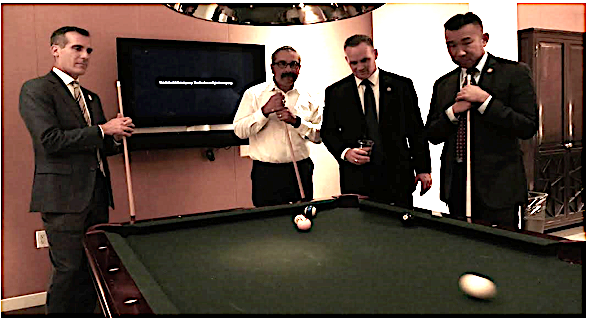 THE GUSS REPORT--Is Los Angeles Mayor Eric Garcetti willing to play dirty pool in order to get significant union money and votes for his re-election as well as for his anticipated future campaigns for either Governor or Senator? (Photo above left: Mayor Garcetti)

Does anyone doubt that the Los Angeles Times – formerly known as the newspaper of record for Southern California – is willing to aid and abet him in that mission?

It certainly seems so in reading the Times’ August 24th article by Paul Pringle and Ben Welsh entitled “LAFD Fire Marshal Steps Down after Criticism that He Cut Corners on Safety.”

Taken at face value the Times made it seem that that man, John Vidovich, a 35-year Los Angeles City Fire Department Deputy Chief assigned to the Fire Prevention Bureau is an incompetent who put firefighters at-risk until the vast majority of them banded together to demand his ouster.

But you know that the story could never be that simple. Life dictates that it isn’t.

The Pringle and Welsh story cries out with questions:

You did investigate that, didn’t you?

Let’s just say that the room in which the vote allegedly took place is rather small.

Call me if you want to discuss specifics on this.

And then there are the documents which expose the sheer fraud … like the one in which an inspector allegedly billed for hours for inspecting a building that was torn down years prior? Wouldn’t it be a good time to look closer at this story and see whether what you were fed by Garcetti and his minions is truthful?

It would appear the full Fire Marshall Vidovich story has yet to be told. Consider this an invitation to stay tuned.

(Daniel Guss, MBA, is a writer and a CityWatch, Huffington Post and KFI-AM640 contributor. He blogs on humane issues at ericgarcetti.blogspot.com/ and can be reached at @TheGussReport. Opinions he expresses are not necessarily those of CityWatch.)