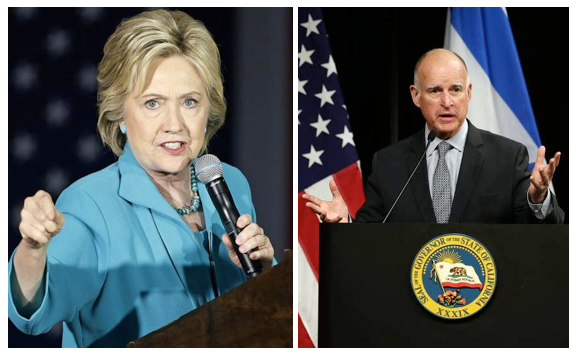 ECONOMIC UNCERTAINTY-Governor Jerry Brown has signed another California budget essentially along the lines he proposed, once again thwarting the designs of some legislative Democrats for expansive new and renewed programs. Not that Brown hasn’t had some expansive programs of his own, especially in education, health care, energy and the environment, and new infrastructure for a sustainable new economy.

“This solid budget makes responsible investments in California and sets aside billions of dollars to prepare for the next recession,” Brown declared in a signing statement.

That last is the tell, the reminder of why Brown has been loathe to restore a number of social welfare programs which he and predecessor Arnold Schwarzenegger cut back in the period in which the now four-term governor inherited a $27 billion state budget deficit. Why not? Because they’re the sorts of programs that grow and grow. And Brown is more convinced than ever that the next economic downturn is already on its way.

This, despite the fact that California’s economy during Brown’s governorship has grown in the world, trailing only those of China, the US as a whole, India, Japan, and Germany.

Russia? Just behind California. Britain? Back in 11th place, even before the exit from the European Union which continues to roil the world economic landscape (and has just turned into a real-life ‘House of Cards’ in both the Conservative and Labour Parties.)

Brown, who has continually, in the view of many analysts, low-balled California revenue forecasts, even doubled his new state budget rainy day fund. Though, of course, any big downturn will probably require significant future budget cuts. That’s the only actual “spending limit,” as I’ve noted with regard to other governors, which works in a democratic society, and is well within the broad constitutional powers of the California governorship.

Brown’s longstanding and growing concern about an economic downturn reflects one of the key eventualities that could lead to the defeat of the Democrat he ended up successfully backing earlier this month in the California primary, former Secretary of State of Hillary Clinton.

Despite a month of woe, the execrable de facto Republican presidential nominee Donald Trump only trails Clinton by, on average, a mid-single digit margin.

The continued danger of a Trump presidency, which if anything has increased again in the wake of Brexit, added a sense of urgency to Brown’s hosting of the first ever Clean Energy Ministerial held in the US. Brown hosted what has become an annual summit of major world energy ministers in his home town San Francisco a few days before the California primary.

Trump is a notorious climate change denier who has vowed to push an energy strategy which would take America back -- though hardly in the way he meant it last week when he appropriated Brown’s 1992 presidential campaign slogan -- at least half a century, relying on coal and other fossil fuels to the extent that the cooking of the planet would not only not be reversed, it would be accelerated.

Clinton, in sharp contrast, has committed to major steps forward along the renewable energy path that California is blazing into the future.

In it, Brown says that Perry, a defense technology insider for more than half a century, “As much as anyone, is aware of the ways, secret and public, that technical innovation, private profit and tax dollars, civilian gadgetry and weapons of mass destruction, satellite technology, computers, and ever-expanding surveillance are interconnected. But he now uses this dark knowledge in an effort to reverse the deadly arms race in which he had such a pivotal role.”

As it happens, Clinton takes a more conventional view, and, among other things, has long backed the NATO expansionism which has alarmed Russia since the ‘90s and may drive a new nuclear arms race as Brown and Perry point out. I’ll have more on this going forward.

Trump, however, has views on nuclear weapons which are frankly terrifying.

He blithely recommends an increase in nuclear proliferation and has spoken of using nuclear weapons as though they are just another military option, holding out the prospect of nuking the terrorists of ISIS. In the American system, the president has quite stunning and immediate direct power over the nuclear button.

If Hillary Clinton is elected, there’s room for debate and improvement on nuclear weapons along the lines advocated by Perry, Brown and others.

But if Trump is elected, there can be nothing but opposition to a profoundly dangerous mindset and temperament. And perhaps prayerful hopes for the best.

In which case Brown’s Jesuit background might come in handy.

(William Bradley is a political analyst. He blogs at Huffington Post  … where this piece was first posted.) Prepped for CityWatch by Linda Abrams.