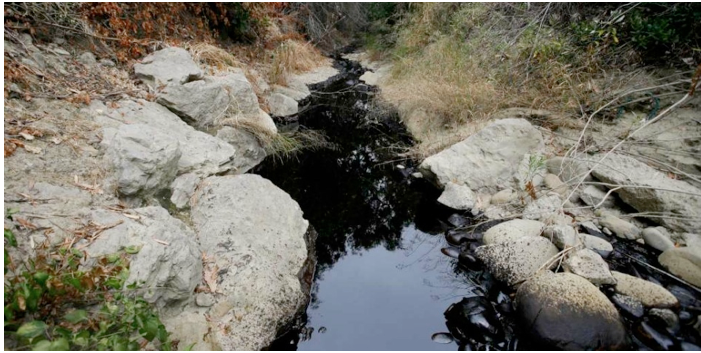 ENVIRONMENT POLITICS--An oil spill has reportedly leaked thousands of gallons of crude from a pipeline into a canyon in Ventura County, California, fire officials said Thursday—in what environmentalists say is a reminder of the dangers of coastal fossil fuel operations.

The leak spilled at least 29,000 gallons, or 700 barrels, as emergency crews used hoses to suck up the "gooey mess" that was created when the oil formed a small lake in a gorge known as Prince Barranca, the Los Angeles Times reported. [[http://www.latimes.com/local/lanow/la-me-ln-ventura-county-oil-spill-20160623-snap-story.html ]]

The operating line has been shut down. The LA Times notes that it is the 10th time in 10 years that the pipeline company, Crimson Pipeline, has had its pipes break or fail.

Meanwhile, the oil company, Aera Energy, is jointly owned by Shell and ExxonMobil and is responsible for 25 percent of California's output, making it one of the state's biggest oil producers.

"It is distressing to once again see this kind of devastation visited upon a sensitive location," said Brian Segee, senior attorney with the Santa Barbara-based Environmental Defense Center.

The figures on the oil spill have been difficult to verify. Earlier in the day, fire officials put the estimate at 5,000 barrels—or 210,000 gallons—before amending it to a much smaller number.

Segee noted that the response to last year's Plains All American oil spill on Santa Barbara's Refugio Beach was similar.

"So far estimates for the size of this spill have been all over the map. It is important to remember that with last year's Plains All American Oil Spill at Refugio Beach, the initial industry estimates were orders of magnitude below reality," Segee said. "But we are still very early in understanding the scope of this spill and the challenges that yet another major oil spill will deliver to our region. Regardless of the size, any amount of spilled oil is inexcusable and destructive."

The Center for Biological Diversity (CBD) told the LAT the spill should serve as another warning of Big Oil's risks.

CBD attorney Kristen Monsell said, "This major spill is another grim example of why we must get pipelines and oil drilling out of California's vulnerable coastal environment. The spill's already causing environmental damage. We've got to stop thinking about these oil spills as accidents and start regarding them as completely predictable ecological tragedies that we can prevent with strong action.

(Nadia Prupis writes for Common Dreams … where this piece was first posted.)