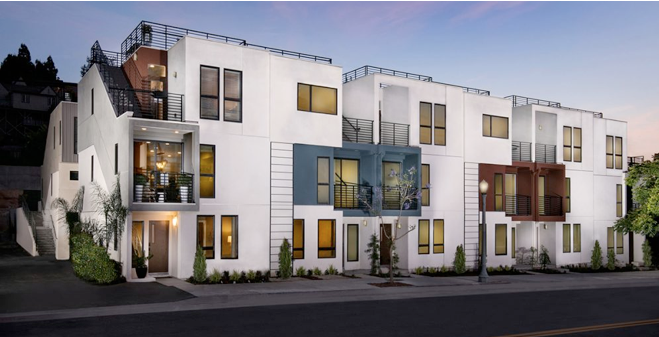 EASTSIDER-I can only say that my failure to grasp the scope of LA City politicians’ ability to rip us off was a gross underestimation of their talent. Now our very neighborhoods are under the same types of attack the Council used to reserve for commercial development. In fact, for those who care, I would point out that there are currently something like fifteen Proposed Ordinances gurgling around the Planning Department.

Of these, four are now directly aimed at the residential neighborhoods we live in: a Small Lot Code amendment, the repeal of the Granny Flat Policy, adoption of a Home Sharing Ordinance, and our old favorite, the Airbnb type short-term rental Ordinance. Oh goody, more “help” from government even as our middle class implodes. You can find the text of all of these Ordinances and backup information here.

ask, is the Small Lot Subdivision Ordinance? Good question. If you live in Northeast LA, there are a whole bunch of complexes that look like 3-story Leggo’s squashed together with virtually no space between them, zip setbacks, and a lack of anything that resembles design. (Example in photo above.)

For example, as you come off the Glendale Freeway going south into Echo Park and Angeleno Heights, there’s one where the freeway ends. It’s amazing -- the freeway particulates can go directly into these units -- I guess to enhance their ambience.

There’s another cluster of them in Silverlake/Echo Park up off of Rowena on the hill by the 5 freeway, built on a hillside that looks like a slide waiting to happen. There’s even one off of Eagle Rock Blvd. by the new Sprouts grocery store. I tell you, they’re going up like popcorn poppin’!

What they are, according to the inventive language of the Planning Department, is “..a new hybrid housing topology that looked and functioned like row townhomes but where each unit was built independently on individual ‘small lots’. It combined the benefits of a single-family home and its full fee-simple ownership of building with the conveniences of a townhouse lifestyle.”

I don’t know what it cost the developers to get the PLUM Committee and City Council to approve this stuff, but I can only say that they got a real bargain from the elected officials. All we and our neighborhoods got is the fuzzy end of the lollipop.

Well gee, I feel so much better knowing that, not to mention that when they adopted this Ordinance back in 2005, they neglected to limit the number of units per project. Now the proposal is that projects of over 20 homes will have to provide stuff like open space, bike parking, and the like. And, of course, all the existing projects will be grandfathered in.

Department adopted a Memorandum outlining the criteria for building Second Dwelling Units. This regulation was more restrictive than the State law (AB1866). These units are usually referred to by everyone I know as Granny Units, Granny Flats, or in the planning vernacular, “accessory dwelling units.” They are the add-on rentals that a lot of people build without a permit to make a few bucks toward their mortgages.

So in 2013, a homeowner group filed a lawsuit over the issuance of such a permit in Cheviot Hills. And finally this year, a Superior Court judge overturned the City’s regulations and entered a judgment directing the City to cease using their current criteria for permitting these units, as well as requiring monthly reports back to the judge.

Evidently this action provided an opening for the City Council to cozy up to the construction community. Instead of filing an appeal, like the City did with the Telephone Users Tax and the DWP annual transfer of funds to the City, the City Attorney and the Council used this opportunity to propose an Emergency Repeal of the existing regulations regarding Second Dwelling Units.

Buried in the Planning Department’s Report and Recommendation is the real reason for the rush to repeal everything instead of fixing any deficiencies in existing rules: the effect of a repeal is to default to State Law and that will be a lot looser than what the City’s extant regulations were.

For example, the Emergency Repeal would allow Granny flats of up to 1200 square feet, eliminate any lot size requirements (like the substandard lots in the hills), and let these secondary units to be built in single-family and multi-family zones.

Don’t’ blink. This one is going through the system faster than a NASCAR race. Good to know the City Council can move so quickly, even if it’s against residential homeowners.

The rationale, of course, is that we need more affordable housing, since Council actions have already made most housing unaffordable.

understand. Everybody knows that a ton of people have been building unpermitted granny units to make a buck or just make ends meet. This Ordinance legalizes them as long as they were in existence as of December 10, 2015.

OK, I get that. The rationale, however, is a doozy. It turns out that those nasty Code Enforcement people have been doing their job and citing the miscreants. Goodness. As the City chooses to describe the problem, “the result is often the dislocation of low and moderate income households and the loss of existing housing stock at a time the City is facing a severe housing crisis.”

about this divisive issue. The last post is available here.

Since that May meeting, there was a public hearing in the auditorium next to the LAPD’s new building, and it was evidently packed with some 300 people. As usual for Airbnb hearings, it was also very contentious. As of now we are still awaiting yet another draft of the proposed Ordinance, and no one’s talking about what if any changes will be in the new draft.

Whatever will be in the revisions, a few things are clear. First, the City Council is going to approve a short-term-rental Ordinance, because they lust for the revenue to shore up their shaky budget. Second, in the adoption of almost any Ordinance, it is virtually impossible to realistically limit the number of guests per rental. And third, without forcing the rental entities themselves such as Airbnb to responsible for providing data to the City, there is no way that LA City will have the technological ability to track and enforce what goes on. Stay tuned.

So…What Does All This Mean?--The net effect of all of these new planning tools aimed squarely at our residential neighborhoods will be to fundamentally change the character of those very neighborhoods. You know, the places we live together that actually define what Los Angeles is, since the City is so big, sprawling, and impossible to get around in that it has no inherent character -- except for being a desert.

Nowhere in these proposed laws is any mention of what is going to happen to parking. In my part of town, where you already can’t park since everyone seems to have at least two cars, one a big SUV or truck, and they already park them on both sides of the street, since the garages are used for other purposes.

What’s going to happen to the existing (and crumbling) infrastructure for water, power, and streets as the load on them potentially doubles? I suspect that the current DWP plan to replace pipes on something like a 200 year schedule is going out the door, and we already have power outages in areas where the power demand is suddenly increasing dramatically. Who’s going to pay for all this stuff and how long is it going to take to ramp up?

Most important, what is going to happen as neighbor is pitted against neighbor? We have already seen with the Airbnb proposals how bitterly divided our communities have become on this type of issue. The invective isn’t pretty, and it is inwardly directed, instead of focused on the City Council that is creating the divisiveness through their actions.

There is a huge increase of folks out there who don’t have high paying and/or full-time employment, as our society devolves into a “sharing” or “gig” economy without fringe benefits pensions or employer paid health insurance. They need additional income to cover the outrageous costs of housing in our City, and I certainly can’t blame them for wanting to do what they can to make ends meet.

It is also unacceptable to expect us to live in neighborhoods which are flooded with too many people, where parking is nonexistent, streets crumbling, increased broken pipes and power outages, and oh yes, where we get to pay for the sidewalks that the City messed up by planting the wrong type of trees.

This is not good governance. This is not good public policy. If our elected City officials are incapable of bringing us together, I can see only one short term solution. Support Jill Stewart and the Neighborhood Integrity Initiative!