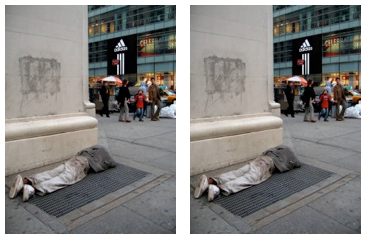 HOMELESSNESS THEN AND NOW-Been a lovely 2016 so far for Los Angeles. But not so much for Los Angeles’ homeless. For them, it’s a life without shelter, food, health care and a positive environment -- an environment that is freezing and often wet.

Regardless of where you live, most would agree we have a major societal issue on our hands.

I have traveled to all but two states and to all major cities, but my perspective on homelessness is based upon the City of Los Angeles: This is where I have lived for most of my career.

As the project manager for the Bunker Hill Urban Renewal project in downtown Los Angeles, I became aware of “Skid Row” and the “homeless” in the late-60’s.

Back then, I read in detail a report prepared by a national expert, Ronald Vanderkooi, for the Los Angeles Community Redevelopment Agency on the homeless population in downtown Los Angeles. I was struck by what it listed as the causes of homelessness in downtown LA, (as well as in San Pedro, the San Fernando Valley and the Westside) and by the concrete recommendations that were made.

These recommendations are the same now as they were then -- both locally and on a national scale.

Many factors can contribute to a person becoming homeless, including, but not limited to:

When one drills down even further, we find five mind blowing facts about the profile of homeless people:

38% are alcoholics, 26% are addicted to other substances, and 25% suffer from mental illness

Nationally, there are 1.5 million homeless people in America and, of these, 23 percent or 345,000 are veterans.

In the City of Los Angeles, there are over 25,000 homeless people, with over 10,000 living in Downtown LA. Of that total, over 6,000 are veterans. According to the Veterans Administration, out of all the homeless nationwide:

To deal with the problems of homeless veterans as well as the balance of the homeless in LA, the Vanderkoi report from the late-60’s outlined the same strategy people talk about today:

1.  Provide emergency shelter during cold and rainy periods. In the City of LA:

Recapping all of the above…

To date, response from politicians and bureaucrats has been less than underwhelming.

Jim Mangia shares the growing sentiment of many in the City of Los Angeles, “There’s not a serious response on the part of the City leadership.”

Increasingly, most cities are making homelessness a crime. For me, homelessness is a symbol of the failure of our society and our government. If the police and fire departments did their jobs the way the City of Los Angeles deals with the homeless issue, chiefs of police and fire chiefs would be fired and the Mayor and Councilmembers all recalled.

In Los Angeles, there should be one person in charge of coordinating services for the homeless, just as it is done in New York City. A financial commitment to solving the problem should be allocated in the following manner:

I am not sure the City has the will or the skill to deal with the homeless problem. However, it will need to muster up both or Los Angeles will remain the homeless capital of America. And no amount of political spin will change this.

(Michael P. Russell has served for the past 35 years as a real estate developer, advisor and expert witness. As a private and public developer, Mr. Russell has lead teams in the development of Howard Hughes Center and Bunker Hill, as well as Irvine Ranch, Playa Vista, Reston, Warner Center, Douglas Park and Amerige Heights. He is a specialist in the clean-up, master planning, entitling and redevelopment of decommissioned aerospace facilities—always trying to leave the Earth better than the way we found it. First published in urbezine.com.  Edited for CityWatch by Linda Abrams.