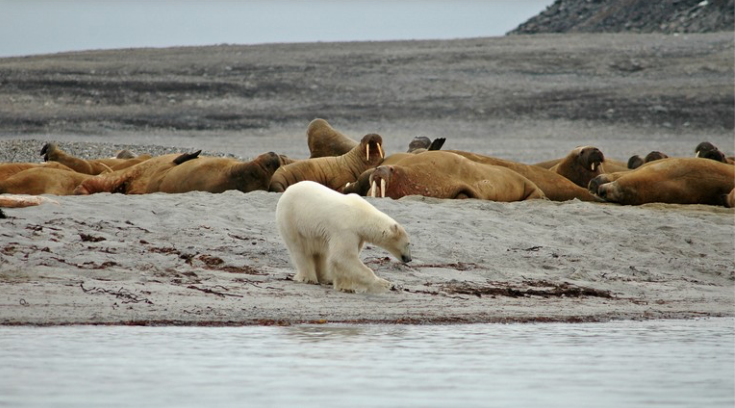 CLIMATE WATCH - Wildlife defenders on Wednesday denounced the Biden administration after the U.S. Department of the Interior issued a rule allowing fossil fuel companies operating in northern Alaska to harass polar bears and walruses while searching or drilling for oil and gas.

"The Arctic should be protected, not turned into a noisy, dirty oil field."
—Kristen Monsell, CBD

Responding to a request from the Alaska Oil and Gas Association, the U.S. Fish and Wildlife Service issued the rule (pdf), which authorizes the "nonlethal, incidental, and unintentional harassment" of polar bears and Pacific walruses that "may result from oil and gas exploration, development, production, and transportation activities occurring for a period of five years."

The rule applies to drilling, seismic blasting, infrastructure construction and operation, and other activities.

The new authorization covers a massive swath of the Alaskan Arctic, including nearly eight million acres in the Beaufort Sea, as well as the area containing the Willow Master Development Plan, a multibillion-dollar ConocoPhillips project approved during the final months of former President Donald Trump's tenure and defended by the Biden administration.

The southern Beaufort Sea's polar bear population is one of the world's most imperiled, with only around 900 animals remaining, according to the Center for Biological Diversity (CBD), which says that "scientists have determined that the population cannot sustain any injuries or deaths from oil and gas activities."

"It's disturbing to see the Biden administration letting oil companies continue their assault on polar bears, walruses, and our climate," Kristen Monsell, an attorney at the Center for Biological Diversity, said in a statement. "The Arctic should be protected, not turned into a noisy, dirty oil field. President [Joe] Biden promised bold climate action, but this is business as usual. Polar bears and walruses deserve better."

The new rule comes as the U.S. Bureau of Land Management announced Tuesday that it will conduct another environmental review of oil and gas leasing in Alaska's Arctic National Wildlife Refuge (ANWR) after Interior Secretary Deb Haaland said "multiple legal deficiencies" were found in a prior review by the Trump administration, which rushed to auction off fossil fuel drilling leases there in its final weeks.

On his first day in office, Biden signed an executive order temporarily pausing new drilling on public lands, pending "a new, comprehensive analysis of the potential environmental impacts of the oil and gas program."

In June, the Biden administration suspended some of the Arctic drilling leases auctioned at the end of Trump's term, a move welcomed as a step in the right direction by environmentalists and some Indigenous people.