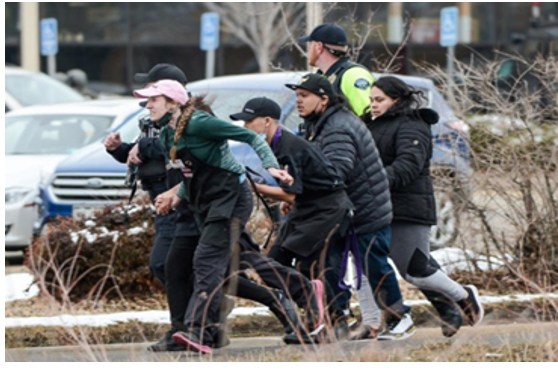 FURTHER--There's an especially infuriating backstory to the latest slaughter of 10 innocents in America, this time in the bubble that was Boulder, CO.

Two years ago, after the mass shooting in Parkland, Boulder became the center of a landmark legal battle between the gun lobby and the city after Boulder's City Council passed two ordinances banning the possession of assault weapons and large-capacity magazines.

Boulder is blue country; it's also in a state that's seen some of the country's most horrific mass shootings, including Columbine - after which the GOP shielded gun manufacturers from lawsuits - Planned Parenthood, the Aurora theater, and a STEM school in Highlands Ranch. In response to the ban, a right-wing group backed by the local, always hungry-for-blood NRA brought a lawsuit against it and any other potential local weapons ban, arguing Boulder was "putting gun owners back into a closet, and that goes against everything Boulder claims to stand for” - a bizarre claim about such a crunchy-peace-and-love-flavored town.

But last Thursday a district judge, who may or may not be one of the many judges with ties to the NRA-funded, pro-gun front group Law Enforcement Alliance of America, said the city "cannot prohibit the possession or sale of firearms."

Citing a 2003 state law enacted by a GOP legislature that preempts cities and towns from restricting assault weapons, Judge Andrew Hartman ruled Boulder's "provisions are invalid and enforcement of them is enjoined” because only state or federal law can enact common-sense measures against mindless mass murder that work and over 80% of America supports.

The ruling was greeted with jubilation by an obscene NRA that a few years ago had mounted vicious revenge campaigns against Democratic pols who backed modest statewide gun control measures.

The Boulder ruling was icing on the cake: The NRA crowed gun-owners should celebrate a "very thoroughly and thoughtfully written" opinion that will make it harder for other cities to try passing "any similar counterproductive ordinances,” "counterproductive" being NRA-ese for "life-saving."

On Monday, before city officials even had time to decide if they'll appeal, the winning streak kept going its blood-slick way when a sick moron his classmates called "short-tempered, violent and paranoid" strolled into a King Soopers supermarket carrying - surprise! - an assault rifle and murdered 10 people, because in this country just because you survived a pandemic that doesn't mean you can safely go to the fucking grocery store, or a massage parlor, or a school, or a church, or a club, or...anywhere without becoming a victim of random, out-of-control gun violence, which is why Boulder was, despite under-reporting, the seventh mass shooting in seven days, 'cause freedom!

As the Boulder news surfaced, the NRA, with its inexhaustible chutzpah, tweeted the text of the Second Amendment: "A well-regulated militia, being necessary to the security of a free state, the right of the people to keep and bear arms, shall not be infringed."

A well-balanced populace, being concerned more about each other than guns or profit, shrieked, "Well regulated?!?!" many times; they also lamented a "sick society" of "insecure dick wavers" and proposed, "Fuck yourselves, death merchants."

Congress, for God's sake and all of ours, do your job.