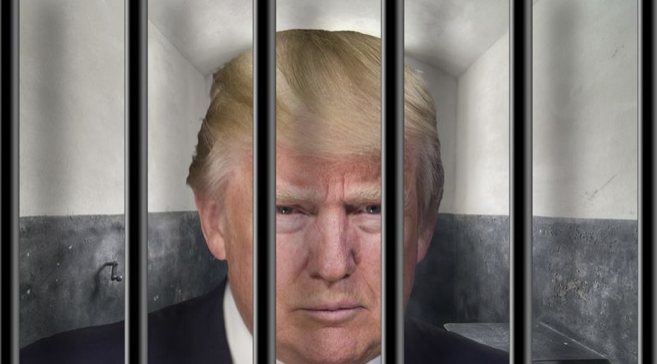 SPECIAL REPORT-In the wake of Saturday's failure of the U.S. Senate to convict Donald Trump for his alleged incitement of the violent insurrectionist attack at the U.S. Capitol on January 6, legal experts, political observers, and government watchdogs are calling for criminal prosecution as the only remaining path for accountability and to prevent the disgraced former president from ever seeking elected office again.

"Investigating, and if necessary, prosecuting, Trump for the many crimes he is alleged to have committed over the years isn't political payback; it's simply the law doing its job against a potential felon." —Sasha Abramsky, The Nation

Writing for the Arizona Republic, columnist E.J. Montini argues that the Senate's refusal to convict has nothing to do with holding Trump to account in the nation's civilian justice system.

The op-ed argues that if the adage "nobody is above the law" is true, then "Trump should be charged with the exact same crime covered in the impeachment, only in criminal court."

According to Montini: It's there under the U.S. Criminal Code Title 18 Section 2383.

The law is simple and straightforward. It reads:

Whoever incites, sets on foot, assists, or engages in any rebellion or insurrection against the authority of the United States or the laws thereof, or gives aid or comfort thereto, shall be fined under this title or imprisoned not more than ten years, or both; and shall be incapable of holding any office under the United States.

Following the acquittal, Noah Bookbinder, president of the watchdog group Citizens for Responsibility and Ethics in Washington (CREW), called it "a sad day for our democracy," but also suggested that Trump could still face prosecution in the courts.

"Trump incited an insurrection to overthrow the elected government of the United States. 43 senators stood with him. It does not end here," Bookbinder said in a statement. "A partisan minority of senators may have been willing to place loyalty to Donald Trump over loyalty to the United States of America, but that does not mean state and federal prosecutors will or that the American people will. Donald Trump's behavior was clearly criminal and was clearly abhorrent. He may have avoided one form of accountability, but he has not avoided all of them."

The Associated Press reports, "Now a private citizen, Trump is stripped of his protection from legal liability that the presidency gave him." And separate reporting over the weekend cited people close to Trump who said he is concerned about the prospect of prosecution—both related to the events of January 6 and other potential crimes. "He's worried about it," one adviser close to Trump told CNN.

As Lisa Gilbert, executive vice president of Public Citizen, put it: "Impeachment aside, Trump is unfit for future office and committed crimes against the American people. And whether through the courts, a commission or other constitutional remedies, accountability will find him."

In a CNN column Sunday, former attorney and radio host Dean Obeidallah urged President Joe Biden to call for a "full criminal investigation" into the role Trump played in the January 6 insurrection effort.

"Impeachment aside, Trump is unfit for future office and committed crimes against the American people. And whether through the courts, a commission or other constitutional remedies, accountability will find him." —Lisa Gilbert, Public Citizen

He was hardly alone in making the argument that nothing in his Trump's Senate acquittal—made only possible by the 43 Republicans members in the minority who refused to convict—prevents federal prosecutors from bringing a criminal case against the disgraced former president.

"Investigating, and if necessary prosecuting, Trump for the many crimes he is alleged to have committed over the years isn't political payback; it's simply the law doing its job against a potential felon," wrote Sasha Abramsky in The Nation on Sunday.

"In fact," he argued, "given the myriad, and very specific, allegations swirling around Trump, it would be an example of clear, illegitimate, favoritism at this point to not investigate the ex-president." Abramsky continued:

Bring on the evidence. Bring on the witnesses. If Trump is innocent—be it of inciting a mob, of avoiding taxes, or of threatening election officials—his top-flight lawyers will get every opportunity to prove their case, including by letting Trump himself take the stand to explain and justify his actions. But if the weight of evidence points to his malfeasance, and if juries find him to be guilty, surely even [Republican Minority Leader Mitch] McConnell, who so cynically voted to acquit Trump and then immediately announced that he held the man responsible for the lethal acts of January 6, couldn't really object to the historical record's being set just a little bit straight.

In a 2019 HuffPost op-ed calling for Trump to be prosecuted in court for his many alleged crimes to the "fullest extent of the law," Jeff Hauser, co-director of the Revolving Door Project, wrote:

The end of Trumpism will not be when Trump is defeated at the polls or even when he is impeached. It will be when America comes together as a nation and acts to ensure that elites like Trump who transgress against our shared laws suffer consequences proportionate to their actions.

On Sunday morning, following the former president's acquittal by the Senate, Hauser link to his op-ed and tweeted: "I wrote this piece 25 months ago and I stand by it."

(Jon Queally writes for CommonDreams.org …. Where this report was first posted.)