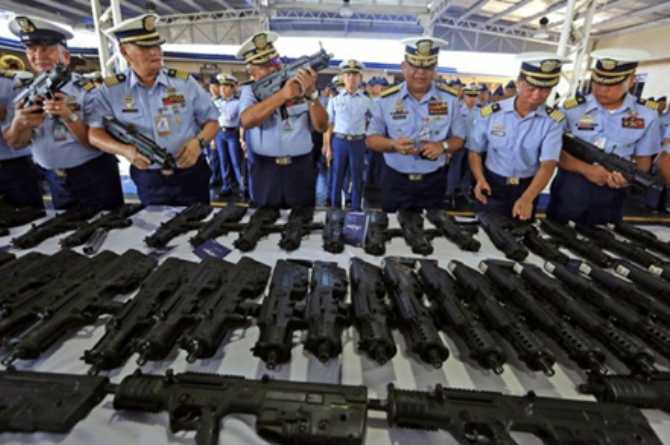 one that now threatens to leave half of young Yemeni children hungry - Israel remains a major, uncontested exporter of weapons and spyware in the heavily armed region. (Photo above: Weapons to the Philippines, whose President Rodrigo Duterte once instructed his military to only buy arms from Israel. Photos  from Phillipine Coast Guard.)

A recent Congressional study found the Middle East represents roughly 35% of the global arms trade, a figure wildly disproportionate to its population; while the U.S. has for decades been the largest facilitator of that carnage, furnishing almost half of all arms there, Israel isn't far behind.

As the world's sixth largest arms exporter, Israel has reportedly sold weapons to about 130 countries - "reportedly" because they maintain a calculated lack of accountability for what they sell and who they kill.

Israel releases no official information about its arms exports: It doesn't regularly report to the U.N.'s  Register of Conventional Arms, it hasn't ratified the Arms Trade Treaty, and its leaders have long cited perceived threats from their neighbors to justify their apocalyptic-level military and surveillance technology. Amnesty and other groups say there's good cause for the secrecy, given their clientele include some of the world's worst human rights abusers: Apartheid South Africa, Argentina's military Junta, the Serbian army during the Bosnian genocide, Rwanda before the genocide, South Sudan, the military in Myanmar, other countries accused of war crimes. One headline on their trade: "Arming Dictators, Equipping Pariahs."

Now the American Friends Service Committee has launched a Database of Israeli Military and Security Exports (DIMSE) in hopes of tracking, and curtailing, that deadly trade. A Quaker organization that promotes "lasting peace with justice as a practical expression of faith in action," the Friends have a long history of activism, from winning 1947's Nobel Peace Prize for rescuing Nazi victims to being one of 20 groups banned by Israel for supporting BDS to lobbying against the U.S.-funded war on Yemen.

They have programs in both Israel, where they focus on countering the militarization that supports the Occupation, and Palestine, where they offer youth initiatives and humanitarian aid.

The database allows users to search by country - India is the largest of 46 customers, then U.S. and Turkey - by product - from drones and small arms to missiles, spyware, heavy munitions - and by company. Project organizers argue that information on Israeli's vast sales of weaponry is vital to anyone who's either fallen victim to it or wants to limit it in the name of global human rights - from Al Jazeera journalists and Mexican activists spied on by Israel's Pegasus software to Gazans used as laboratory rats in Israeli military assaults so they can market weapons as “battle proven” to global Palestinian solidarity activists seeking an arms embargo and end to the Occupation.

"The database is not complete," the Friends observe, "and due to the uncompromising secrecy of the arms trade, it probably never will be."

Still, the hope is to expose the financial, moral and human costs of arms trading by an apartheid regime where the obscene chasm between lived realities "fills the air, bleeds, is everywhere on this land."

(Abby Zimet writes for CommonDreams.org … where this piece was first posted.)