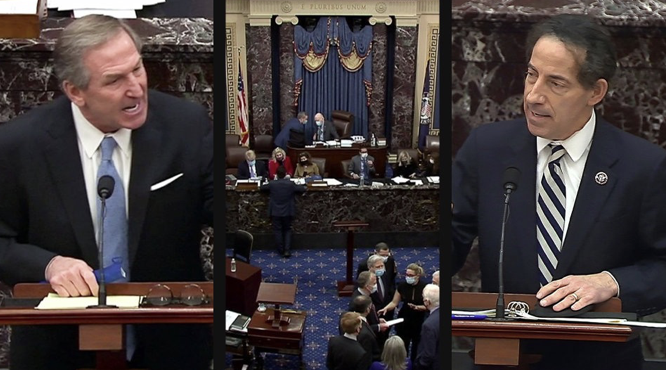 MY TURN--The GOP and the Democratic parties are in a competition to see which can be the most treacherously venal and both are winning.

A trial without testimony and other evidence is a fraud and a sham. February 1, 2020 The Atlantic, A Trial Without Witnesses Is No Trial at All, by Buckner F. Melton Jr.

Twice the Dem Party has put on a deceitful charade of having an impeachment which the Dems themselves sabotage.  Just because Pelosi or House Managers call their talking “evidence” does not make it admissible evidence. In both Nov - Dec 2019 and again in February 2021, the Dems have engaged in their own Big Lie about evidence.

In a series of articles back in November - December 2019, I explained how Pelosi was sabotaging the impeachment of Donald Trump by restricting the evidence which she would allow the House to gather November 25, 2019, CityWatch, How Impeachment Actually Works The law professors who testified on December 4, 2019, saw Pelosi’s treachery and that it would lead to Trump’s acquittal in the Senate.  Law professors from the left and from the right told Pelosi and other House Dems not to stop the evidence collection December 5, 2019, CityWatch, Harvard Law Professor Noah Feldman’s Roadmap to Nancy Pelosi’s Subversion of Impeachment

As pointed out in the December 5, 2019 article, “The true jury in impeachment is the President’s own voters. GOP members of the House were looking at the voters and seeing signs that moderate GOP voters were about to turn against Trump.”  The same political dynamics existed during the February 2021 trial. The true jurors were not the Senators but rather the Trump supporters in the general population.  Their power over the Senators rested in their threat to primary any GOP Senator who would remove Trump.  As the nation learned with Nixon, once enough evidence had been gathered for the base turn against the President, then a bipartisan visit of Washington leadership can the President resign.  Even in Nixon’s time, no GOP Senator wanted to vote for conviction in the Senate, but if the President resigned, then they would not have to publicly vote.

Because the GOP base was beginning to turn against Trump in November December 2019, Pelosi realized that she had to stop the parade of stellar witnesses and the accumulating evidence mandating Trump’s removal. As pointed out, Pelosi’s personal career is based on her ability to raise money and Trump was her best fund-raising vehicle for the November 2020 election. With more witnesses like Col. Vindman, Trump’s support would have dwindled to the point that the GOP leadership would Nixonize him in 2019. As the world knows, Pelosi pulled the plug on the evidence gathering in 2019 and Trump stayed in office to Pelosi’ personal benefit.   April 16, 2020, CityWatch, The Real Reason Nancy Pelosi Does Not Want to ‘Nixonize’ Trump

The 2021 Senate impeachment trial had the same political dynamic as occurred during the House phase 2019 phrase, i.e., a significant portion of Trump’s base was turning against him.  While Nixonization was moot when the only penalty was to bar Trump from holding future public office, the underlying political dynamic was intact.  Trump’s base was coming to realize that he was a sham a fraud, a deceiver, who had lost the November 2020 election.  Trump used his Big Lie in order to con them out hundreds of millions of dollars while inciting them to commit crimes including treason and murder which would send some followers to prison for the rest of their lives, if not to the death chamber. Trump had pardoned none of them.

The Dems knew that Trump’s base was turning against him; they presented video of insurrectionists’ saying how Trump had incited them.  Trump was being denounced as a false prophet and a coward who fled to Florida rather than having all the evil baby eaters arrested on January 20.

A Trial Without Evidence Is a Sham

Nothing the House Managers said was evidence. Attorneys’ opening statements are not evidence. No video showed during an opening statement is evidence. Before any video can become actual evidence, it must be authenticated, which means someone has to testify to who, when, and how the video was taken.  None of the videos qualified as evidence of anything.

Nor did the House Managers call a single witness.  Showing a video of what some woman said to some news reporter is not evidence. Even if the video itself were authenticated, her statements in the video were inadmissible due to the Hearsay Rule.  That means a person has to show up in court and testify under oath and then be cross-examined.  A TV interview cannot be cross examined.  Showing a video of the Texas Relator explaining why she attacked the Capitol highlighted the Dems’ total disregard for due process.

We now come to the most treacherous aspect of the 2021 Senate trial where the House Managers stabbed the American public in the back.  Although the entire trial had produced no testimony and no admissible evidence, on Saturday, February 13, 2021, the Senate voted to call witnesses.  Thus, the grand charade of the attorneys’ flapping their jaws being evidence was over. Now America could have live human beings come before the Senate and testify and be cross examined on live TV.

We could now have members of QAnon, of the Proud Boys, and other insurrectionists show up and explain how Trump had incited them to the insurrection.  Their testimony would defuse the threat of GOP being primaried by the Alt Right. The insurrectionists’ testimony could also describe other GOP Congressmen and Senators had re-enforced Trump’s message for the need to Stop the Steal. Those insurrectionists who had been given tours of the Capitol could testify about their January 5th Capitol tours.  There could be more witnesses how Trump was delighted with the violence, thereby confirming that violence had been a goal of his pre riot speech.

Then, the Dems Plunged Its Dagger into the Nation’s Back

The cowardly Dems backed down. There would be no live witnesses. Witnesses would take too long!  Really, the matter was so insignificant that taking evidence would be too time consuming. The OJ trial took 11 months (January 24, 1995 to October 3, 1995).  The Menendez Bros’ three trials took nearly seven years. Charles Manson’s trial took seven months. But the Dems felt that the worse attack ever launched on America by its own citizens since the firing on Fort Sumter April 12, 1861 did not merit even one week or one live witness.

The Dems’ treachery has vindicated Trump and restored the Alt Right to power.  The Dems will continue their Big Lie #2 that it is all the GOP’s fault, but the GOP knew from the outset, that the Dems are full of sound and fury and signify nothing except cowardice.