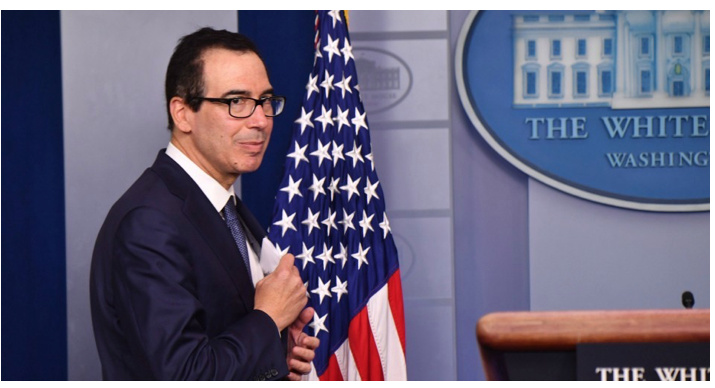 THE LEAD-Progressive critics and advocacy groups are responding with alarm and anger to the Trump administration's refusal to disclose the names of more than 4.5 million companies that have collectively received over $500 billion in corporate bailout money through a federal program created to provide businesses with relief from the coronavirus pandemic.

(Photo above: Treasury Secretary Steve Mnuchin arrives to speak in the briefing room of the White House in Washington, D.C. on October 11, 2019. (Photo: Nicholas Kamm/AFP via Getty Images)

The over $2 trillion Coronavirus Aid, Relief, and Economic Security (CARES) Act signed by President Donald Trump in March established the Paycheck Protection Program (PPP) with $349 billion in funding for forgivable loans. After the initial capital ran out in just 13 days, lawmakers approved $310 billion more—though over $130 billion of that amount was still left as of Tuesday.

Although, as the Washington Post reported, the Small Business Administration (SBA) "typically discloses names of borrowers from the loan program" on which the PPP is based, Treasury Secretary Steven Mnuchin testified to the Senate Committee on Small Business and Entrepreneurship that he won't be following that model for the Covid-19 program, despite concerns about which companies are benefiting from it.

As Mnuchin told the Senate committee Wednesday: "We believe that that's proprietary information, and in many cases for sole proprietors and small businesses, it is confidential information." The secretary's comments provoked a barrage of condemnation, particularly among individuals and groups that had previously expressed concern about the PPP.

Progressives swiftly echoed the group's critique in their own tweets—including Fordham University law professor Zephyr Teachout, who wrote: "This is outrageous AND exactly what was obviously going to happen AND exactly why many of us opposed CARES as written."

Several other critics made similar nods to current events, tweeting: "This is the looting we should be furious about" and "Oh shit. Looting has broken out in Washington."

"This is absolutely unreal," declared author and activist Naomi Klein. "Looting with masks on."

Broader charges of corporate looting in relation to the CARES Act have circulated since before it was signed into law. However, in the over two weeks of protests since Minneapolis police killed George Floyd, "looting" has become "the word of the day, on the lips of every newscaster, the president, and elected officials across the country," as progressive radio host Thom Hartmann wrote for Common Dreams on June 1.

Hartmann and others have made that case that, indeed, "looting is a major problem in America"—just not in the way that the issue has been presented by President Donald Trump and the corporate media, who have spotlighted the property destruction and the stealing of goods that have occurred alongside the demonstrations against police brutality and systemic racism over past few weeks.

"Americans know who the real looters are," progressive radio host Benjamin Dixon told Common Dreams in late May. Referencing a recent analysis from Americans for Tax Fairness and the Institute for Policy Studies, he added: "It's the billionaires who plundered America for $434 billion during the pandemic while the essential workers keeping our country afloat make barely over minimum wage."

(Jessica Corbett writes for CommonDreams.org … where this piece was first posted.)