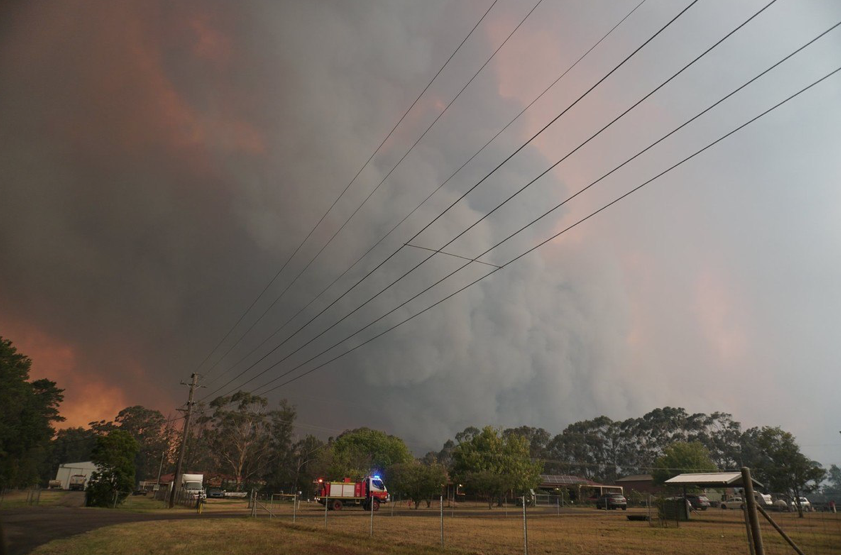 CLIMATE POLITICS-Like so many these past few days, I have been stunned by the devastation across Australia.

The photographs and videos of the fires sweeping through the countryside and surrounding towns and even the city of Sydney show a nation literally on fire. Terrified people clung to the bottoms of boat docks, neck deep in water to escape the flames. Thousands crowded on to beaches while the skies above became a Mars like hue.

At the time of my writing this at least 18 people are confirmed to have died, over 14 million acres scorched, and a half billion wild animals have perished. These numbers will almost certainly rise. Indeed, it has made even the most stoic of climate scientists tremble. The fires are unprecedented in scale, bigger than the fires in California or even the Amazon in 2019. And they are particularly alarming as this is only the beginning of summer in the southern hemisphere.

Of course, deadly bushfire behemoths are not uncommon in Australia. In 1926, sixty people perished in south east Victoria. The Black Friday bushfires in 1939 claimed 71 lives. But the intensity of these incidents has increased as temperatures have steadily climbed over the 20th century. Then in 2009 the most devastating of fires took the lives of 173 people, scorched at least 450,000 hectares of land (1,100,000 acres), and killed hundreds of thousands of animals. Today’s fires have a new context that cannot be ignored. As climate change accelerates, so too does the pace and scale of its consequences.

While Australia has been reeling from devastating bushfires, just to the north thousands of Indonesians have been forced to flee for their lives too, but this time it is due to catastrophic flooding. In fact, the capital city itself is sinking into the ocean thanks to excessive extraction of ground water and rising seas. The government has made public its plan to relocate the capital to an inland area on the heavily forested island of Borneo, a grim prospect for the future of indigenous peoples and wildlife in that already beleaguered region. Indonesia is a world leader in the destruction of its own rainforests, much of it cleared or burned for global timber trade and to make way for profitable crops like palm oil. Its unbridled greed has decimated wildlife, including the endangered orangutan. And based on its corrupt history, the government will likely abandon the poorest of sinking Jakarta first.

In many ways the beginning of the third decade of the 21st century might also prove to be the beginning of an unraveling of sorts. And this does not only pertain to the biosphere. Last month’s UN sponsored COP 25 (Conference of Parties) in Madrid, which aimed at addressing our climate catastrophe, was a complete sham much like similar conferences preceding it. Thousands of delegates were joined by hundreds of fossil fuel and banking industry lobbyists and profiteers. They not only attended the conference, but also led several of the meetings. The sickening irony of this was not lost on protesters, who walked out of rooms en masse with hands clasped over their ears once the oil men began speaking.

But around the world the most wealthy and powerful governments remain firmly in denial, and that denial is rooted in the interests of capital. In other words, the shortsighted profits for the moneyed few. As fires ravaged his country Australian Prime Minister Scott Morrison, for instance, spent the beginning of this disaster holidaying in Hawaii. But this apathy should come as no surprise since he had the gall to stand in the House of Representatives in 2017 clasping a lump of coal and declaring: “This is coal. Don’t be afraid. Don’t be scared. It won’t hurt you.” Now, three years later, it appears that those insensitive and downright stupid words have clearly come to haunt his government.

Only a couple months ago the world’s attention was on the fires in the Amazon. Fires that should not have occurred in a wet rainforest. Fires that have devastated fragile ecosystems and the indigenous communities that depend on them. Fires that were, in large part, intentionally set by loggers, miners and cattle ranchers under the approving gaze of the Bolsonaro regime. Today, mainstream media attention has moved to a different continent, but the scenario isn’t much different. There are very rich and very powerful people burning the house we all live in down to ash to make a quick buck, so we shouldn’t be surprised that they will create distractions, even deadly ones like war, to divert our attention and resources. Or they will simply fiddle, like Nero, or go on holiday when the flames get too close to their gilded mansions.

(Kenn Orphan is an artist, sociologist, radical nature lover and weary, but committed activist. He can be reached at kennorphan.com. This piece was posted most recently at counterpunch.org) Photo credit: Helitak430 – CC BY-SA 4.0