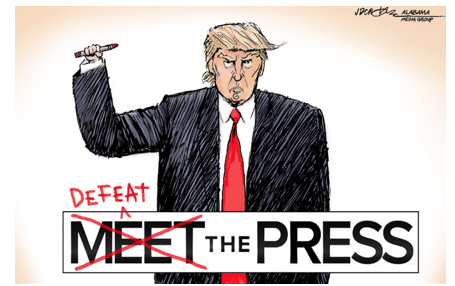 TRUMP BEST AT SOMETHING--President Donald Trump, who recently said he would announce the “MOST DISHONEST & CORRUPT MEDIA AWARDS OF THE YEAR,” has been awarded the title of the world’s most oppressive leader toward press freedom by the Committee to Protect Journalists.

Trump claimed the journalism organization’s top prize for “overall achievement in undermining global press freedom,” and joins four other leaders, including strongmen like Turkish president Recep Tayyip Erdoğan and Russian leader Vladimir Putin, who “have gone above and beyond to silence critical voices and weaken democracy,” the Committee to Protect Journalists said Monday.

The group said its awards were for “recognizing world leaders who have gone out of their way to attack the press and undermine the norms that support freedom of the media.” Though CPJ determined that countries like Russia and China hold the tightest grip on their national media, it declared Trump the winner for “overall achievement.”

Trump’s disrespect for the First Amendment is his most obvious offense, CPJ noted, and is so flagrant that leaders in other countries have adopted his “fake news” term for unflattering coverage.

In addition, “under Trump’s administration, the Department of Justice has failed to commit to guidelines intended to protect journalists’ sources, and the State Department has proposed to cut funding for international organizations that help buttress international norms in support of free expression,” CPJ said. “As Trump and other Western powers fail to pressure the world’s most repressive leaders into improving the climate for press freedom, the number of journalists in prison globally is at a record high.”

Trump was named runner-up in CPJ’s “Most Thin-Skinned” category, losing to Erdoğan. Trump’s attacks on the media are vicious and frequent, and he has responded to criticism by threatening lawsuits and the removal of broadcast licenses.

“CPJ research shows that when public figures and political leaders lob insults at the media, they encourage self-censorship and expose journalists to unnecessary risk,” the organization said.

Trump’s latest media attacks have focused on journalist Michael Wolff, whose new book Fire and Fury has sent the president and his administration into a tailspin. Though Trump has frequently denigrated CNN, he had adviser Stephen Miller appear on the network’s “State of the Union” broadcast Sunday in an attempt to defend Trump in the face of the book.

Miller was escorted off set after host Jake Tapper cut short the disastrous interview. “I think I have wasted enough of my viewers’ time,” Tapper told Miller. Trump, meanwhile, contended that Tapper “got destroyed” in the interview.

Trump tweeted that he will present his supposed media awards, which he renamed the “Fake News Awards,” on Jan. 17.

(Willa Frei  is a HuffPost reporter based in London. Fluent in French and proficient in Spanish and Arabic, she focuses on international news and refugee-related issues. Willa is a graduate of Yale University. Posted originally at HuffPost.)