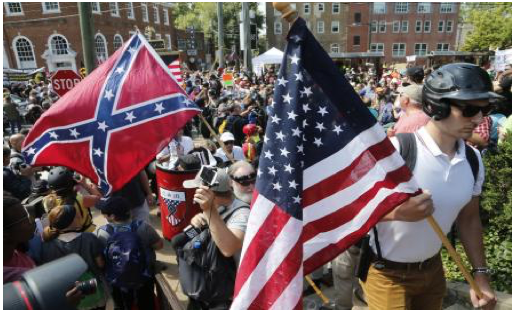 One thing this past weekend's horrors in Charlottesville showed us is that that concerns about polarization and divisiveness can sometimes be a dodge from the real problems.

I want to be as clear as possible that political and partisan polarization is a real thing. Political scientists and journalists have collected decades of evidence, from a great many sources, that the parties are farther apart ideologically than they've been in a century—or possibly ever. Differences between Republicans and Democrats are reinforced by divisions between conservatives and liberals, between rural and urban citizens, between whites and non-whites, between southerners and northerners, etc., as new issues and divisions get absorbed into the party divide.

Such polarization is not inherently unhealthy for a country, and it even serves some positive purposes. The fact that voters actually have a choice in elections between two very different visions, and that they know they'll get something different from the status quo if they change leaders, is a good thing. It means elections have consequences and voters have some sense of what those consequences are. This has not always been true in our history.

And for the most part, those divisions reflect alliances of sincere policy preferences across the country. There's no objectively correct level of taxation or business regulation, no obviously right answer to how easy it should be to obtain a handgun or a pack of cigarettes. And the country is a large and very diverse one, so there's no reason to expect leaders to just come together and figure out the right answer. So people get together in teams and argue it out in elections and legislatures.

And yes, this polarization does make governing harder. It means some problems go unaddressed. It means that, when compromises are finally hashed out, no one really likes them. There's no easy way around it. But we can accept that there are different sides arguing sincerely and legitimately for their vision of good government and a healthy society.

This is not the division we saw in Charlottesville. On one side of the divide were people carrying Nazi and Confederate flags, carrying torches and holding their arms in a Nazi salute, proudly and openly boasting of the supremacy of the white race. On the other side were people opposed to that vision. One of the white supremacists drove his car into a group of the counter-protesters, killing one of them and seriously injuring many more.

This should be an easy call. When Nazis march on an American city and attack and kill people, it's very apparent what the problem is.

And many politicians spoke up to decry what they were seeing unfold. But some chose to recast the problem as one of polarization or divisiveness. President Donald Trump, of course, criticized the violence and hatred "on many sides" and urged the nation to come together. His daughter Ivanka said that "We must all come together as Americans—and be one country UNITED." Vice President Mike Pence echoed the president's statements and said that the "U.S is greatest when we join together & oppose those seeking to divide us." Sheriff David Clarke praised Trump for condemning violence and not taking sides.

When violent white supremacists attack and kill people, criticizing divisiveness and urging people to unite is, at best, a dodge. At worst, it's telling victims of violence and terror that they should make more of an effort to reach out to their attackers. If the sides are Nazis and non-Nazis, we should welcome divisiveness and polarization.

Reading some of these responses, I was reminded of last year's story about an older white man, John McGraw, who attended a 2016 Trump rally in Fayetteville, North Carolina, and assaulted a younger African-American man, Rakeem Lamar Jones, who was there protesting Trump. McGraw was arrested and received one year of probation. McGraw apologized for hitting Jones, but McGraw's statement following the apology was notable:

You know what you did. And I know what I did. I'm not going to say you were wrong or I was wrong. You and I both know what occurred, and I hate it worse than anything else in the world. We got caught up in a political mess today. And you and me, we got to heal our country.

If someone attacks someone else, the problem is not that there's a "political mess," and the solution is not that both of them need to "heal our country." In this case, divisiveness was the scapegoat. It was a way for McGraw to avoid moral responsibility for his actions.

Now, where's the line between legitimate polarization—where both sides' views should be given equal standing—and the kind of division where leaders should take a clear stance for one side and against the other? That's obviously a judgment call. But if one side is wearing a swastika, it shouldn't be a hard one.

(Seth Masket, a Pacific Standard contributor writer, is a political scientist at the University of Denver, specializing in political parties, state legislatures, campaigns and elections, and social networks. He is the author of No Middle Ground: How Informal Party Organizations Control Nominations and Polarize Legislatures. This perspective was posted first at Pacific Standard.)