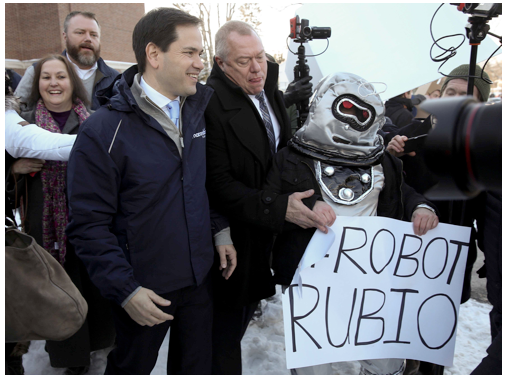 GELFAND’S WORLD--If nothing else, the New Hampshire primary demonstrates that the American people haven't lost their sense of humor. Approaching the week of the election, Marco Rubio was being presented as a candidate of destiny. Instead, he froze up during a debate and gave nearly robotic answers to mundane questions. He then found himself being pursued in public by a strange man wearing a robot costume. Then he finished in fifth place. It was politics done as Abbot and Costello.

There is of course a more serious issue that is being chewed on, ever so delicately, by analysts and pundits. Will this be a watershed election in which the voters rise up and overthrow a corrupt order? If not, what kind of election will it be? In other words, does Bernie Sanders have a chance? Trump?

In the short run, the vote didn't hurt her. Everybody pretty much expected her to make that vote. But it has festered. It showed her as being opportunistic about something that demanded principle.

Equally to the point, the fact that she was expected to make that vote shows that a lot of voters already viewed her as a standard-issue politician rather than any kind of principled leader.

Perhaps words like expediency and opportunism are a bit harsh. One colleague referred to her vote as strategic. But whatever you call it, her vote has done her harm in the long run. Some on the left take that vote on its face, and therefore find Hillary to be hawkish. Others see her as the type who would vote for the war simply to preserve her own political chances. That's the issue of trust and principle in a nutshell.

This is of course an oversimplification (consider Sanders on gun regulation), but I suspect that it gets to the heart of the matter.

There is an argument going around that Sanders really isn't revolutionary at all. His politics is New Deal liberalism. The intent of such arguments is that we shouldn't find Bernie Sanders scary. He isn't a Bolshevik, just a reincarnation of the politics of FDR. This argument is correct, but misses the point, because it misses the direction that the political revolution is supposed to go.

The force that is driving the Sanders phenomenon among the young is disgust with standard political speech making. Politicians have learned the hard way that a few words can derail a career. They learn to avoid saying provocative things. The best example in Los Angeles right now is the issue of homelessness, a topic in which it is practically impossible to take a political position that is based in reality. On the national level, we have the defense budget, treatment of veterans, voting rights, and so on. Your standard issue politician works with his/her speech writers to make sure that nothing of substance finds its way into a speech or a fundraising letter.

That, I suspect, is where the young voters are annoyed. Listening to politicians talk is an experience akin to watching television commercials. The speeches and the commercials force us to adjust our thinking in a painful way, forcing us to remind ourselves that we are being misled. Budweiser is not the nectar of the gods, and Los Angeles politicians are not going to solve our traffic congestion anytime soon.

The revolution that may play successfully with voters is a revolution of candor. In this sense, Sanders and Trump are said to be two sides of the same coin. Their substance is entirely different, and Trump's arguments suffer from the fact that he distorts the truth, but they are similar in their willingness to say things that antagonize some part of the electorate.