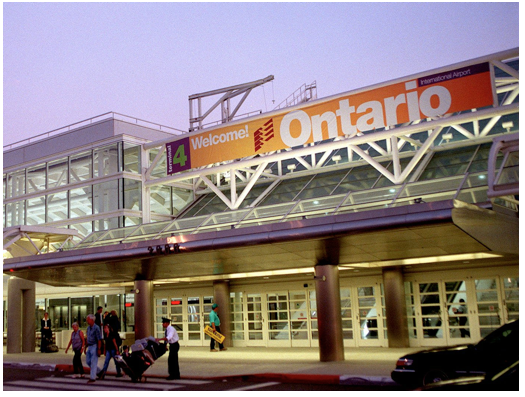 A TRANSPORTATION WIN-WIN-Control of Ontario Airport is set to return to local hands this summer – finally! This is significant and it is good. It’s good for the regional economy of the Inland Empire. It’s good for the City of Los Angeles, operationally and fiscally.

Offloading ONT allows LAWA to focus on LAX singularly (well, also Van Nuys). With solid assurances in place protecting the 215 existing workers at the Ontario Airport, the transfer is good for airport workers specifically, and generally, for all workers. Ironically, both historically and politically, the deal fulfills the 2006 Hahn “Regionalization” accord assuring the people of Westchester that LA would spread all that airport pain around.

The people of Ontario and the communities of the entire Inland Region that runs from East Los Angeles County into San Bernardino and Riverside Counties, have long supported and encouraged the development and expansion of the Ontario Airport -- pretty much ever since its earliest days as Latimer Field in 1923.

At CA Fwd’s recent conference in Ontario, “A Roadmap to Shared Prosperity,” speakers including Assemblymember Cheryl Brown (AD 47, San Bernardino) celebrated the positive impact that local control of the Ontario Airport will have on the local economy. “Think about all the jobs,” said Brown.

Support for Ontario’s fight for local control is deep and long-standing. “More than 130 governments, elected officials, business and civic organizations, and newspaper editorial boards in four counties have endorsed local control for ONT,” the City of Ontario wrote, announcing the filing of its 2013 lawsuit against the City of Los Angeles. Citing a 42% decline in air traffic between 2007 and 2013 as evidence of LAWA’s mismanagement and inattention to the medium-hub facility, the filing asserted that the City of Los Angeles cannot control ONT “for all of eternity.”

In the end, responsible, persistent and passionate local government officials -- champions like Ontario Mayor pro Tem and President of the OIAA, Alan D. Wapner -- acknowledged the ability of the Riverside/San Bernardino labor community to find common ground with sane local business organizations. With actual support from the people of the Inland Empire and not just the flying public, they all came together and won, resolving years and years of acrimony and conflict, much to the benefit of all.

“It’s the return of a regional asset to regional control,” noted Cindy Roth, Chief Executive Officer of the Greater Riverside Chambers of Commerce. “The real issue is the economic impact this has had on the … region... It’s something we all support."

The terms of the deal are good for the City of Los Angeles and for the new Ontario International Airport Authority (OIAA), created by a joint-powers agreement between the City of Ontario and San Bernardino County to run the airport.

“In August, Los Angeles Mayor Eric Garcetti coyly gave two figures with regard to the actual amount of money Ontario would fork over to finalize the transfer, saying that Ontario newspapers could call it a $150 million deal and that Los Angeles newspapers could refer to it as a $260 million transaction,” reported the San Bernardino Sentinel.

Specifically, Ontario pays $30 million from reserves, assumes $60 million in debt, and makes payments of $50 million over five years plus $70 million in the final five years.

LAWA transfers $40 million from Ontario’s unrestricted cash accounts and – voila! – 1967 and 1985 agreements that gave Los Angeles control over the Ontario Airport are finis!

Note that in 2011 the City of Los Angeles turned down a confidential offer to purchase the airport for $50 million with an assumption of $71 million in bond debt and another $125 million for passenger facilities charges -- at a time when the City could have really used the money.

Los Angeles Mayor Eric Garcetti now calls the agreement “a step forward for Ontario, the entire Inland Empire, for Los Angeles, and for the region of Southern California as Los Angeles has reached a tentative agreement to transfer Ontario Airport back to the people of this city.”

“When we come together we can do big things, and this is at least as big as what we did up in Owens Valley,” said Mayor Garcetti.

Councilmember Joe Buscaino (CD 15), who represents the City of Los Angeles at SCAG  (Southern California Association of Governments) and the League of California Cities, said, “Returning Ontario International back to the Inland Empire will allow the newly formed Ontario International Airport Authority to develop strategies that expand service in one of the fastest growing regions of the state.”

“It will also “allow Los Angeles World Airports to be laser-focused on modernizing LAX and creating a better passenger experience for its 70 million annual passengers,” Buscaino added.

In 2007, ONT flew 7.2 million passengers; in 2014 that number was 4.1 million. Just imagine what that statistic means for the life and family of an airport custodian earning $37,000 -- a good job, all things considered – who was faced with a transfer to LAX, living in Rancho Cucamonga. Those were the dark years of city service.

But the Inland Empire is an expansive, hopeful place, a region that welcomes growth, goods, and all that comes with it. Brett Snyder, aviation expert and former airline executive, urges Inland Empire travelers to use ONT:

“Airlines don’t care what people say, they care what people do,” he said. “Fly from your airport, it’s the best thing to do as it gains independence.” (Brett Snyder runs the website The Cranky Flier.

Kelly J. Fredericks, P.E., A.A.E., named on January 20, 2016 as the Ontario International Airport Authority’s first CEO, arriving with 33 years of aviation experience, looks forward with the ebullience of the region:

"I am impressed by everything happening in the Inland Empire. The transformation of Ontario International Airport is the most intriguing and exciting development project I can imagine. I have never seen such commitment and support demonstrated by a community towards a key transportation hub, and such a spirit of collaboration to optimize its economic benefit."

(Julie Butcher is a retired union leader, enjoying Riverside and her first grandchild.) Edited for CityWatch by Linda Abrams.