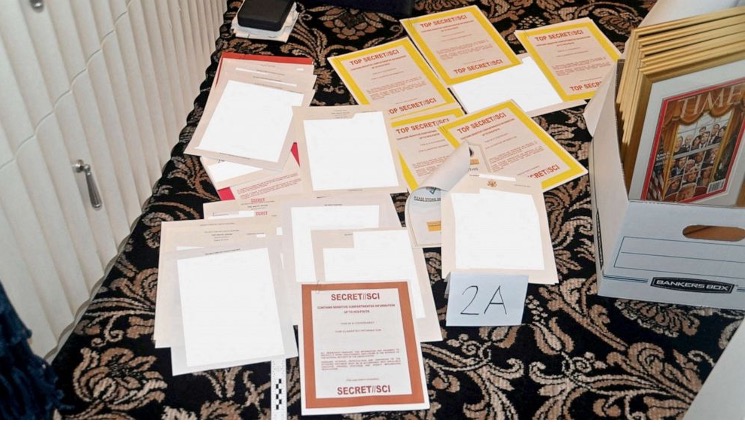 GELFAND’S WORLD - Get The Picture? It's the defining moment of the Trump era.

Secret and Top-Secret documents lying on an ugly carpet, alongside a box with framed Time Magazine covers. From the legal standpoint, it is simply Attachment F in a court filing authored by the Department of Justice, part of a response to Trump's own court filing.

You can read about what's in the photograph here, including explanations for some of those cryptic markings such as HCS-P/SI/TK. After you read those explanations, you will have a better feel for the importance of protecting the documents.

But suddenly, to parody late night television advertising, There's More! Donald Trump put out a posting on his own version of Twitter (It's called Truth Social) in which he says the following:

"There seems to be confusion as to the "picture" where documents were sloppily thrown on the floor and then released photographically for the world to see, as if that's what the FBI found when they broke into my home. Wrong! They took them out of cartons and spread them around on the carpet, making it look like a big "find" for them. They dropped them, not me - Very deceiving...And remember, we could have NO representative, including lawyers, present during the Raid. They were told to wait outside."

Remember in all those episodes of Columbo and Blue Bloods where the detective asks, "Did you hear what he just said?" And the other policeman says, "Yes, I did." Here, we have just heard Donald Trump confess to federal crimes on his own social media site. He is testifying that the documents shown in the picture were actually in his home ("they took them out of cartons"). Notice that he doesn't dispute the accuracy of the picture, what with all the top-secret notifications and color coding. Trump's whole rant is one long admission that he had possession of the documents before the feds came and took them back. He seems to be saying that those mean FBI guys were rude and left the place a mess.

Trump also provides us a pretty good case for obstruction of justice, considering the well-documented history of the government asking for those documents months ago and being ignored. Trump is not denying that he had the documents and knew of their existence. He is just trying to build outrage over the fact that his office was ransacked and papers were "sloppily thrown on the floor."

There is a curiosity here that has not been commented on, at least in my reading of the news media. Any normal, sane person, when confronted with a raid on his private property yielding up evidence of multiple crimes, would have gotten legal advice which most likely would be to shut up. That's what lawyers say when you are in legal jeopardy. Instead, Trump goes into his usual pattern, which is to deflect and obfuscate, to raise every red herring he can find, and to act angry. This whole pattern suggests some ongoing loss of cognitive ability on Trump's part, along with an increasing loss of ability to control his temper. Think of it this way: Any rational person intending to take possession of top-secret documents (in knowing violation of the law) would have set up a better line of defense, perhaps some pretense that the documents were accidentally shipped to Mar a Lago along with thousands of other items. If nothing else, this shows that Trump didn't read spy novels, or at least didn't learn from them.

The story gets worse. Here's from CNN:

"Former President Donald Trump's attorney Alina Habba said on Fox that she has been in Trump's office where the FBI photographed classified documents and says he "has guests frequently there."

So now we have Trump's own attorney admitting that some of the nation's most important secrets were available to prying fingers and eyes. Over the past few days, we have been deluged with accounts from people who work with top-secret documents, explaining how many layers of control there are. Such documents are not supposed to be seen by anybody but those who have been carefully vetted and have the proper security clearance. Now, we have testimony from Trump's own attorney that the rules were grossly and routinely violated.

There has been a certain amount of crowing by the anti-Trump folks in response not only to the picture, but to the entire DOJ filing. That's because Trump used to be able to control the news cycle with his Tweets. Suddenly, he has been defeated in this process by the DOJ through their ability to respond in a timely matter. In fact, Trump has played right into Merrick Garland's hands by giving the DOJ an excuse to publicize The Picture.

In the previous article, I suggested that Trump had stolen the documents with the intent of peddling them. I made clear that this was conjecture on my part and offered an alternative to the effect that possession of the documents would provide Trump some bargaining room. The latter conjecture is of course based on the idea that Trump knows he is guilty as hell, and that he therefore needs something to bargain with.

There is yet a third alternative which bears consideration. It's been suggested that Trump, due to his underlying mental condition, loves to flaunt his power and importance. And what better way than to share secrets with foreign rulers and with his own cronies. This is a possibility, but the sheer mass of the secret material suggests that if this is the case, Trump's pathology is massive. If you wanted to impress some visiting billionaire, why would you need two dozen cartons of "for your eyes only" material?

Still, it's a possibility. But along with the previous conjectures, it raises one final point. This observation has been worked over thousands of times already, but it bears one more repetition: Trump really believes that he is above the law. That's obvious from his long history of breaking laws all over the books. But I have to think that there is a deeper problem, in that Trump's thinking is so foggy that he doesn't entirely comprehend what the laws are, or why you can't violate them with impunity. In his own mind, Donald became some sort of god-emperor when he became president, and he has lived in that fantasy world ever since. We got a clue when his press agents claimed that his inaugural crowd was the biggest ever, in clear contradiction to the evidence. Eighty something million Americans got the gist, but it's obvious that a lot of Americans didn't.