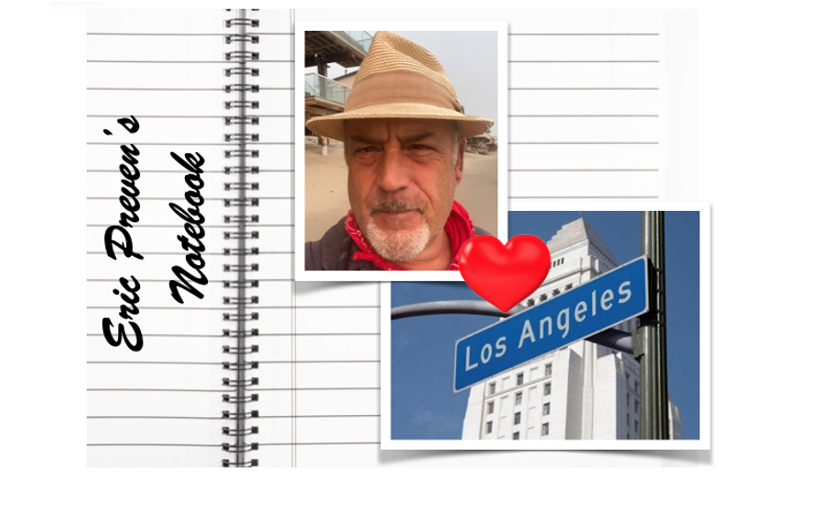 ERIC PREVEN’S NOTEBOOK - On Tuesday, March 8, 2022, there was a closed session meeting of the Board of Supervisors.

To make it very hard for the public to hear the public comments, the Youtube link plays for 26 minutes before the Executive Officer starts the meeting and opens it up for comment. Briefly.

The effects of being denied regular swimming have been taking a toll on me.  This exile is not self-imposed.  The public officials who fund the YMCA of Greater Metropolitan Los Angeles, who are in partnership with some Munger mullah in one of the YMCAs have been targeting critics for speaking out.

What kind of retaliation?

There were eighteen items posted on the budget and finance meeting special agenda for Monday March 21. Because it is a Special Meeting, there will be no opportunity for a General Public Comment, but you can speak on a couple of items for sixty seconds each.

But since they're jacking ambulance rates and bumping up Didi Hirsch Mental Health services, they also stuck the Justice fund on there that will reliably bring out a lot of speakers to make everything... impossible.

Among the bouquet of the items increasing legal spending with term extensions for outside counsel and glancing at the Fiscal Status Report, there are several harassment, retaliation, and discrimination items.

Another item in which it is alleged, that the City was improperly paying employees resulted in a $250,000 howdy-do for Renne, Public Law group.   Not sure about that name.

In the matter of LAPPL v. Board of Fire and Police Pension Commissioners... we'll try to ask Paul Krekorian about that one, and he won't respond.

And the public can see that we spent (or are in the process of spending) about $487,000  to defend against a deputy city attorney, Mr. Anthony, Koutris another in a series of disgruntled City Attorneys, who were refused a transfer due to his disabilities. His case is on the agenda as a closed session.

In 2013-14, Mr. Anthony Koutris, another in a string of highly disgruntled city attorneys, was actively trying to return to his job in the criminal division.  The deputy chief of staff for Mike Feuer, Leela Kapur, who vanished into thin air recently, asked him if he wanted to continue to do criminal trials, "... this late in your career."    #SOS

In case you think Mike Feuer is doing a great job, Mr. Koutris wrote that he is personally aware that DCA Elizabeth Greenwood, who may have "contracted Typhus"  in Herb Wesson's office during the period when Deron Wiliams was worried about rats in the ceiling (and elsewhere.)

Koutris said Greenwood's "doctor prohibited her from driving, was offered a transfer to the City Attorney's Airport Branch (that recently endorsed Joe Buscaino for mayor), which is closer to her home, due to her illness and her public disclosure of the unsafe conditions at City Hall.

I would testify about unsafe conditions in city hall... btw

Koutris did not get an accommodation like Greenwood who, in my view is not credible for a variety of reasons, and so... another super-mess and Equal Protection claim.

Question: who is doing a better job?  Skip Miller, presiding over the BOS bungles, or Mike Feuer, the defeated and beleaguered City Attorney of Los Angeles?

This little ditty was filed in February 201 and has to do with Plaintiff Jerome Boyd, an African-American male, who was a Battalion Chief of the Public Safety Section within FPB, and colleague Andre Johnson, an African-American male, who was a Captain II of the High Rise Unit within FPB until Fire Marshal ("Vidovich") ordered his pre-textual transfer to Fire Station 36.

"Due to this Department-wide systemic racial and gender animus, Plaintiffs have continuously and systematically been looked down upon and subjected to discrimination, harassment, and retaliation because of their African-American race and association with other African-American firefighters. The LAFD is essentially an all-white boys club, and anyone who fails to align themself with this mentality is looked down upon and treated differently.  The LAFD s systemic racial and gender animus is evidenced by the referral to several fire stations, including Station 66, Station 33, and Station 14, as "Black [African-American] free zones."

African-American and female firefighters are also subjected to different standards in passing background checks and being admitted into the Department, which prevents most African American and female applicants from becoming LAFD firefighters. Disclosure: Kristin Crowley, was just made the first woman Fire Chief.

Each of the defendants, retaliated against them for speaking out against: inappropriate workplace behavior, reporting and speaking out against wrongful and discriminatory, harassing, and retaliatory* treatment based on their race, national origin, gender, and/or association.

Because they are a protected class of persons, speaking out against improper conduct, and generally attempting to protect and secure their rights.

In addition, between November 2015 and November 2016, Fire Marshal Vidovich stated, on several occasions, that "we want to weed out the internal terrorists."

This firehouse special lawsuit was brought by Matthew S. McNicholas, and he had one other matter on Monday's budget agenda, so a nice accommodation to the McNicholas & McNicholas firm.  They've donated to Krekorian and Feuer.

A sworn member of LAPD, Officer Juan Gomez was subjected to a pattern of discrimination and harassment based on his Hispanic Heritage and Mexican national origin.  On his first day of work at Topanga division, the lawsuit alleges, as he was walking in, an Officer Graybill drove his vehicle, blocked Gomez's pathway, and asked, "Are you lost?" "Do you work here?"   "Do you have an ID?" "What are you doing here?"

Graybill's discriminatory comments were aimed at questioning Plaintiff Gomez's legal status on his Mexican origin and appearance.  Other times Graybill would ask if anyone could translate. Again, discriminating against Gomez on the basis of his Spanish accent.  Eventually, Gomez left with acute stress disorder.

There is one more... and it's being brought by Dale K. Galipo, Esq.  He's a real buttkicker.

On the early morning of April 9, 2018, seventeen years after the issuance of the erroneous arrest warrant and at least 11 years after the interactions with Detective Lugo, several LAPD officers from the Gang and Narcotics Division (including Detective Niall Byrne, and several other officers) with firearms drawn, entered Plaintiffs property and dwelling in Lakewood, California and arrested him on the aforementioned warrant.   Plaintiff had committed no crime and there was no reason to believe that he had.

Sir, this situation is outrageous. I'm being retaliated by the same YMCA who made you and Krekorian keynote speakers instead of a CD2 debate. Remember?

The political favor of blocking an open discussion with the Youth in Government group, about CD2.

Now, the Hartmires and John Lee (in Englander's shoes) are taking me out of my neighborhood YMCA for speaking out, about the midday closures.  I am requesting state assistance. Thank you.🆘

I'm writing to you directly because Sean Hasset of the Public Integrity Division has a policy wherein he refuses to speak to Angelenos on the telephone.  At all.

That makes no sense to any of us, but today I received a strange intimidating phone call on my cell phone from a man in (Lake Forest, CA) who alleged he was the end of the line at the Metropolitan YMCA of LA legal department.

I have been a member of the YMCA for over fifty years and swim daily. This man, who I have never met called me and said that my membership was being terminated. I asked on what grounds and he refused to explain other than that my conduct warrants termination.

I said that's absurd. "What are you talking about?"

He said as a not-for-profit, the YMCA organization was not required to provide me any explanation or due process, as a public entity would have to.

I explained 1) we are in California  2) I am innocent and have not broken any rules or policies  3)  the YMCA is sponsored by Mayor Garcetti, Council President Nury Martinez, Sheila Kuehl, Kathryn Barger, Paul Krekorian, John Lee of CD12, and others, about whom I write a biweekly column.  I delivered a public comment recently that was critical of Y leadership.

The man ended the call and canceled my reservations to use the pool, which is something like golden tickets.

The prior Director, David Hartmire moved to the CD12 YMCA in the North Valley recently, leaving Mr. Casey Banks in charge.

Mr. Banks recently asked members to bring in new people for a 33% discount. I had already written about the service hours reductions, but when I asked to speak to Mr. Banks about the program -- Sadie Torres, who is disgruntled and unprofessional said that Mr. Banks was no longer with the YMCA. Two other Y employees disagreed.  We just got an eblast from Banks last month.... this group is not to be trusted.

I am writing to the Public Integrity Division because this YMCA, which prides itself on character, is trying to terminate my membership without proper cause or justification as a form of retaliation for speaking out.

Felon, Mitchell Englander promoted the bejesus out of the not-for-profit,YMCA, and helped them reel in a ton of money and the Los Angeles Times wondered if Englander should have 'maybe' disclosed the donors.

Various people familiar with the situation feel the YMCA is retaliating...🆘 because as Stuart Waldman put it, "Nobody cares about you."

Waldman is the President of the Valley Industry Commerce Association,

Another suggested it might have to do with my Ethics Commission remarks aimed at Gary Winnuk, who spun the FPCC revolving door into the Stephen Kaufman firm, where he's defending Mitchell Englander against a $170,000 charge that he was engaged in quid pro quo.

Before repping Englander, we noted the LA County Board of Supervisors in the case brought by the Harold Jarvis Taxpayer group over Measure H, scale tipping.  The people coughed up $1.3M. Too bad Measure H is for $400 million a year for ten years to provide the service for the HHH housing that is still not built... but we're up to 1,100 out of the 10,000 units promised.

In Englander's defense, he completed the city’s mandatory ethics training four times and even the judge couldn't tell what act Englander committed in exchange for taking the $15,000 cash in the bathroom. His only admission of guilt was the fact that he lied to the Feds.

And he lied in front of hundreds, thousands of Angelenos and members of the city family who would watch his deranged abuses of power.

Who gets credit for making him the Public Safety Chair, and a member of the Budget and Finance and Planning committees?  A hatric of powerful committee posts?

Wesson is slippery like that but he'll be the first to tell you, "all y'all are going to... come to Jesus, one day,

Ask President Nury Martinez, she'll tell you, once she finishes her investigation into what happened to the Donuts from Mr. Donut before the council's most recent weeklong recess.