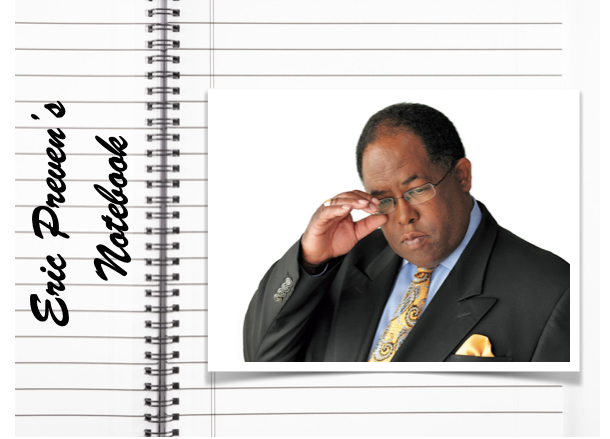 ERIC PREVEN'S NOTEBOOK - Not exactly sure what to say about how to fill the very large shoes of Mark Ridley-Thomas.

Herbert J. Wesson knows the district well.  Maybe he could come in quickly and bring some clarity to the Redistricting michigas?

The Council President Nury Martinez has a lot going on, so where most functional jokes don't require any underscoring or explaining, out of an abundance of caution, I was joking.  Confusion really is the enemy of comedy.

Herb Wesson should not be ignored, but rather he should be served with a Permanent Restraining Order, as suggested for Mitchell Englander and Wesson's self described best friend, Jose Huizar, with whom he carved out a future for the new eighth, who appears to have ninth envy.

Marqueece Harris Dawson would be happy with Exposition park, as long as Curren D. Price Jr. and Del Richardson get the mothership, USC, of George Lucas fame.

To be clear, the Academy Museum is near LACMA but The Lucas Museum of Narrative Art is in Exposition Park.

As for whose district, Wesson would know.   How about Andrew Westall for CD10 caretaker?

A joke, your highness.

The good guys came out in force to support MRT, but an unpaid suspension was simply not avoidable.

The Attorney for Mr. Ridley-Thomas, Michael Proctor, wrote a strong letter that was automatically published in the Los Angeles TImes on account of that paper's policy re: offering fair and balanced coverage. [Spit Take here].

One would assume the paper did not charge Mr. Ridley-Thomas or his lawyer for such fantastic and timely placement but with the Los Angeles Times one can never be sure exactly what one is getting.  But one can usually count on them getting it first.

I became wary of the pols treasured partner program down at the LA Times rather early on in my journey.

When a hunting dog like Paul Pringle loses the scent on Mark Ridley-Thomas and his 2nd district initiative, one has to take a look.

An exchange with the Editorial Board about AD 54 Special Electioneering and the touting of Hilda Solis and Sheila Kuehl as progressive icons, resulted in a call for transparency re political advertising at the Times.

You'd think in a healthy news city, that information would be disclosed voluntarily by the local paper of record. "If we can decode the genome, we can post who is buying ad time from the Los Angeles Times," a local candidate wrote to Patrick Soon-Shiong, the new owner:

With all that in mind this is a formal request for the Los Angeles Times to voluntarily disclose how much advertising money was collected from Sheila Kuehl and Hilda Solis during the 2014 Supervisor election. Please include any payments for advertisements and services purchased by their committees or Independent Expenditure Committees to elect them, comprised of unions, the Democratic Party and other interests supporting those two candidates.

Also include advertisements purchased by supporters of the above referenced candidates who spent money to attack other candidates!  For instance... maybe Sheila went after Bobby Shriver and vice versa

Sorry to be a pest, but this is not my first rodeo and if money in politics is what seems most important--group shrug, here-- to the Times, then let's have a full and transparent report. If we can decode the genome, we can post who is buying ad time from the Los Angeles Times.

So far, the TImes has refused my requests for an accounting of how campaigns buy advertising.

The Times published,  “Whoever would have believed that the LA City Council would act as judge, jury and executioner based on unproven allegations?” tweeted Avis Ridley-Thomas, according to the Times.

When the Feds Press Charges: "They have you by the balls," a member of the public said.

The 20-count indictment includes charges of conspiracy, bribery and wire fraud that allegedly took place when Ridley-Thomas was a county supervisor, so the City Council," MRT's lawyer claimed, "has no grounds to suspend him."  Nice try.

Bonin led the effort to make the whole injustice seem like a big misunderstanding.

Bonin said, the allegations against MRT were new and fresh.  Huh?  The crimes were 2017, 2018, so Bonin should "check himself, before he wrecks himself."

One speaker wondered why Donald Trump was allowed to continue serving after he allegedly committed high crimes and misdemeanors, but Mr. Ridley-Thomas was not being afforded an opportunity to continue his long track record of service.  Worth considering.

These lawyers are desperate and throw anything they can at the wall to see what sticks.  Proctor suggested that there was no need for charges because L.A. County had already done a “a comprehensive review” in 2018 after the allegations were first made. No wrongdoing was found. The county peeking in its own navel, resulted in nothing?

Thank you, Mr. Proctor. You may be seated.

Bettors who bet against me getting through were rewarded, but surprisingly (not surprisingly) Rick Tuttle, the former City Controller got through to sing the praises of Ridley-Thomas.

Back in the day before Eric C. Bauman was disgraced and defrocked from the LA county democratic party, Tuttle carried water for the party boss lady Sheila Kuehl.   But Tuttle adored MRT... deep adoration.

Or do I have that wrong?  Would Mr. Tuttle be barred from serving on an endorsement committee, if he'd publicly pre-selected a candidate to endorse under the old rules?  What about under the new Feb 2014 rules?

Re: my dissatisfaction --  if there is any, it has nothing to do with the County Dems endorsement of Sheila Kuehl, it has to do with your conduct.

In fact, my meeting with the Democratic leaders a few weeks ago, Clark Lee included, was a genuine pleasure.  You were in Sacramento, presumably tending to other party... embarrassments.

The Tuttle scuttle arose post-meeting, when I double-checked a few salient details, as I'm known to do.

The RED LINE copy of the confusing Constitution/Bylaw amendments, that you are refusing to make available, is the controversy.

Re: your suggestion that I have been harassing your staff -- lol rotfl lmfao teehee hehe pfffffft.  Mr. Bauman, my beef is with you, not your staff, and I have no intention of tolerating such wild and false accusations.

You are regarded as a shrewd player, Mr. Bauman,  but where do you think a controversy about February 2014 changes that you made to the constitution/bylaws goes...?  Are you going to burn the ships to sequester an honest look at those changes...?

I suggest that you post the RED LINE copy of the changes, refund my $100 dollars, and let's get back to the open and honest conversation about county government that you and your staff have done a commendable job of excluding me from.  Kudos.

Yes, the Ethics Commission seems lost.  No, they do not know what they're doing.

Activity expenses include gifts and must be itemized if they are valued at $25 or more. Id.; LAMC § 48.02. Just as lobbyists and lobbying firms cannot make certain campaign contributions, they also cannot make gifts to City officials. Gifts from lobbyist employers are not prohibited, but they may not exceed $100 per City official per year.

As noted in the December 8, 2020 report, lobbyist employer USC reported itemized activity expenses totaling $78,033 in the third quarter of 2020.  For the salary paid to a City Official, Christopher Hawthorne, Chief Design Officer Office of the Mayor / $12,659.

Does this mean Mayor Garcetti or someone else directed USC to pay the Chief Design Officer?  It's not clear.

If so, the mayor would not have a personal gain.

A rare walnut woodland in Studio City is under attack, not by the squirrels, but rather an actuary from Blumenfield's district CD3 or maybe Staffer B John Lee CD12 correction, further out into the great City of Westlake Village incorporated in 1981.  They're loaded out there.

The Austin Family LLC and Karo Torossian are moving forward with fencing off some private property along Ventura Blvd, after the city vacated city property, and apparently put a lock on the gate.

They are eager to start construction without showing a permit, and the current Chief of Staff for CD2, Karo Torossian has not responded to my inquiries.  Odd.

Locals in Studio City are unclear about what to do in the face of potentially illegal activity. How could a project slip through without any environmental review or public notice, given that it sits on a rare walnut woodland?  wtf

Karo has been busy starring in the role of 'dimwitted' objector to the CD2 / CD4 faux game of roulette currently underway citywide, please cc him with any comments to the commission. His biggest scene in the unfolding drama was when he blurted out to the Van Nuys Neighborhood Council that the redistricting commission was riddled with serious corruption.

Paul Krekorian who has effectively termed out, so who knows... if CD2 as we know it is more westerly, it will be closer to Westlake Village; maybe Karo can take a dip in Austin Family LLc's pool. I wrote to Karo five days ago with the following subject line: SUNSWEPT / Whitsett VB Studio City.

Nothing. He's been seen pretending to be outraged that Mr. Westlake Village incorporated in 1981, is doing funny stuff in Studio City.   When I asked Karo Torossian and Lisa Karadjian about it, Randy Fried ended my service on the SCNC.

In 2017, Netflix CEO Reed Hastings famously declared that sleep is our competition. Now the battle rages... within.

He also said he “screwed up” and should have acknowledged that his employees were “in pain” by the streaming giant’s decision to air the special. Netflix also says it will "more regularly" release hours viewed counts “so our members and the industry can better measure success in the streaming world."   No sleeping.

At press time we were cued up to hear the arraignment that was capably clogged up with other cases.

Will there be negative consequences?

How can we be sure if the public is not allowed in City Hall that there will not be Ex parte meetings between the FBI and the City Council.

Behind the Hate: Who is Andrew Tate