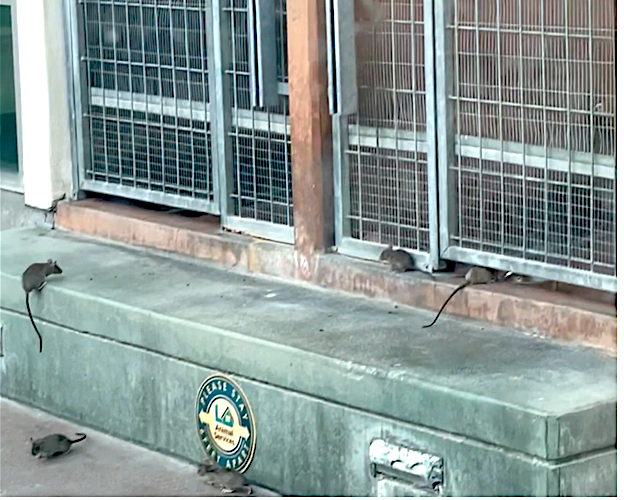 ANIMAL WATCH-Dangerous Pit Bulls recently have been the greatest threat to the safety of adopters at Los Angeles Animal Services “No Kill” shelters because even a history of severe aggression was not a deterrent to allowing unsuspecting individuals or families to interact or adopt them, but the recent post-COVID reopening of the East Valley shelter revealed another terrifying hazard -- packs of RATS.

According to General Manager Dana Brown (who recently replaced Brenda Barnette) adopters are rushing to the shelters to select new pets on the weekends (when the shelters do not require appointments.) She reported to the LA Animal Services Commission at its last meeting that adoptions were up 60%.

But photos taken at the East Valley shelter on that weekend show that the rats (which have had free run while the public was away) have become so bold that, even with humans present and in broad daylight, they are unafraid of running into the kennels and taking the dogs’ food. (Rats are nocturnal animals and rarely seen during the day.)

PICTURES (AND VIDEO) WORTH A THOUSAND WORDS

There is no denying what is happening in the photos or in this video, and, YES, there was a dog in that kennel!

The rats are shown, undeterred by the public presence, as they run in and out of a kennel occupied by a dog and grabbing food from its bowl.

Any cat or dog you take home from the East Valley (or other City shelters, according to reports that this is citywide) that has been exposed to, in proximity with, or sharing food or space with rats, may be carrying deadly diseases internally or on its skin or fur. Once home, that dog or cat is petted, held, and sometimes sleeps with -- a child or adult who has no idea of the danger.

RAT DISEASES/PARASITES CAN BE TRANSMITTED TO HUMANS FROM DOGS

Many city dwellers are not aware of the very serious diseases carried by rats, and the ability to transmit these diseases to humans (the term for this is “zoonotic”) and to other animals.

Some of the diseases that can be spread from rats to people are bubonic and pneumonic plague, murine typhus, salmonella, leptospirosis, Hantavirus, and tularemia, according to The Humane Society of the United States.

Los Angeles-area veterinarians have recently been reporting there is a severe outbreak of leptospirosis -- which is very rare -- and warning owners to vaccinate their dogs and not take them to dog parks, doggy day-care centers or any locations where they might be drinking or eating and coming in contact with the saliva or urine of other dogs.

Although this alarming outbreak may not be totally due to shelter animals, they could be major contributors, because many adopters are eager or feel obligated to assure their new dog has “socialization.”

Leptospirosis (“Lepto”) is a disease caused by a bacteria called Leptospira  Interrogans. It can infect multiple species of mammals, including humans, dogs, cats, rats, mice, and other animals. Until June 2021, it was rare in Los Angeles.

But, on August 13, 2021, NBC News reported “Rare Dog Disease on the Rise in West LA County, and stated that a leading local veterinarian announced, “It's truly an epidemic” and explained that Leptospirosis is a bacterial disease that can lead to kidney failure and even death.

One local veterinary office said “they'd seen maybe a dozen cases over the span of 40 years of work. In the past three weeks, however, that same vet has seen triple that number of cases.”

Veterinary surgeon Dr. Alan Schulman told NBC, based on the other veterinarians he's spoken to on the Westside in recent weeks, 50 to 100 cases is a conservative estimate for how large the canine leptospirosis epidemic has become.

“It’s the rats,” Dr. Schulman said. “They urinate places, they defecate places, dogs get it from them."

Los Angeles County Public Health Department has confirmed a large increase in cases, starting in July, mostly from the west side of LA County or the San Fernando Valley.

“Rodents can carry several parasites at the same time and are reservoirs for many diseases including those carried by ectoparasites, such as fleas, ticks, lice, and mites. In fact, rodents are likely responsible for more deaths than all the wars over the last 1,000 years,” says Ehlrich Pest Control.

In humans, symptoms are variable and may include fever, severe headache, and muscle aches. In severe cases, people may have yellowed mucus membranes, kidney damage and respiratory distress, according to the CDC. Click here to learn more about lepto in people. LA City animal shelter workers are exposed to this day and night at LAAS -- these rats are no secret. Management and City officials have not expressed concern. The rats also fight over a food, with the stronger ganging up on the weaker animals to reduce competition and assure an adequate supply is available. This leaves dead carcasses around the shelter, according to employees, who are constantly inhaling the dried, flaking residue.

WHAT IS THE CITY AND LOS ANGELES ANIMAL SERVICES DOING ABOUT RATS?

The City is reportedly using “humane birth control” supplements in food to address the rat overpopulation, rather than trapping or otherwise addressing this serious issue. This oral contraceptive is not new and apparently not effective.

Here’s how it is described in an ad by one of the major distributors/ manufacturers, Conntraceptal (not necessarily the product used by LA):

“Our technology and research provide the answer! That mouse you saw scampering for cover is not the problem it's a mere raindrop in a deluge.

However, with bowls of tasty dog food accessible in kennels, it appears the rats may not be consuming “herbal birth control supplements” -- at least not at a level to control their population at East Valley shelter.

And, even if every rat was immediately sterilized (which is impossible) and the property was sealed so that no new rats could enter (again, impossible), it would still take two years to get rid of the existing rats, because that is their average lifespan, according to a former shelter manager familiar with this process.

Rats are very smart and will not eat “food” that could harm them more than once, which is why poisons must be effective with only one dose. And, with so much healthy, flavorful dog and cat food available, very few of the rats are likely to eat sufficient quantities of the herbal birth control for it to do any good on any of the rats -- let alone all of them. In short, trying to feed them “birth control” is a losing battle, and the related problems will continue to multiply like the rats.

On December 7, 2020, we looked at a similar situation at the LAAS West Valley shelter, which was NOT open to the public in an article entitled, Rats Invade LAAS Animal Shelters During COVID-19 Shutdown.

It pointed out that the LAAS West Valley shelter supervisor at that time, who worked with tireless patience and diligence with very cooperative General Services’ staff members, trying to coordinate a workable and effective solution, would undoubtedly have been more successful without LAAS management’s “leadership team.”

A reason then-GM Brenda Barnette kept a low-profile approach to the rat issue was undoubtedly because she was committed to the Best Friends Animal Society hardline “No Kill” stance and was, thus, at least philosophically bound to “save them all.” Her lack of attention also demonstrated her disregard for employees' and the public's safety.

RATS, DOGS AND DISEASE – WHAT ARE ADOPTERS REALLY TAKING HOME?

It is time for Angelenos to demand that someone with knowledge, expertise, true caring and courage makes decisions about Los Angeles Animal Services’ shelters -- to protect the animals, visitors, adopters, and employees from this (and other) hazardous situations.

How can anyone -- including Mayor Garcetti and his Animal Services Commission appointees -- look at this situation and allow the animals or the staff to work in this disgusting and dangerous environment?

And how can Los Angeles -- the supposed “humane capital” of the U.S. -- care so little about the trusting, unsuspecting animal lovers who adopt unwanted, homeless pets, and take them directly into their homes and families from a kennel they share with RATS?