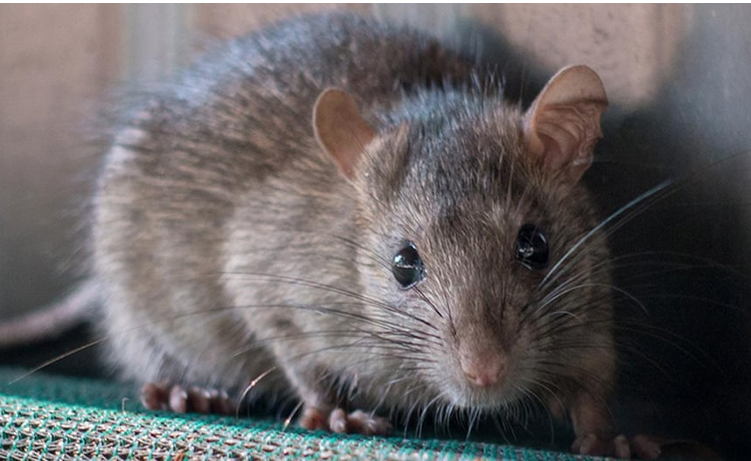 ANIMAL WATCH-While Los Angeles Animal Services General Manager Brenda Barnette boasts loudly and often about clearing the shelters of dogs and cats during the COVID-19 pandemic, she's been silent on the invasion by rats --

a species that has taken Mayor Eric Garcetti's "hunker down" and stay "Safer at Home" slogan seriously, and is thriving in the city shelters.

And why not? Fewer pesky dogs and cats to fear (except Pit Bulls, which are notorious rat killers), a plentiful food supply, and the combined expertise of LA Animal Services "leadership team" and the General Services Department can't find a way to evict them without breaking some CA law. (Rumor has it that the rodents may be getting advice from LAAS Commission President  and tenants' rights advocate Larry Gross.)

Another reason Brenda Barnette has kept a low profile on the rats is undoubtedly because she is committed to the Best Friends Animal Society hardline "No Kill" stance and is, thus, at least philosophically bound to 'save them all.'

STAFF NAMES WITHHELD TO PROTECT THOSE WHO HAD A VOICE, BUT NO CHOICE

This is a shortened version of dozens of emails obtained by a CPRA, with several employees involved from each agency. Names of City employees who are caught up in this melee are not  revealed, since they are also unwitting victims in a maze that will  have readers screaming profanities and kicking doors at the revelation that Los Angeles business owners who are struggling or have closed businesses and workers who are going bankrupt, are still paying taxes to support months of debate over rat traps -- our City dollars at work!

It also points out that the LAAS shelter supervisor, who worked with tireless patience and diligence with very cooperative General Services staff trying to coordinate a workable resolution,  would undoubtedly been more successful without LAAS management's "leadership team."

On July 15, 2019, an email sent from the General Services Division (GSD), which is in charge of making things work citywide, to an LAAS District Supervisor and  then-Asst. Animal Services GM Melissa Webber discussed LAAS transitioning from  a regular rodenticide to exterminate rats to a new, much more expensive birth-control product, called ContraPest. This was due to "a complaint that the rodenticide  had been outlawed by the County and most areas because it kills not only rats, but wildlife."

The LAAS District Supervisor  needed to discuss it with the Leadership Team.

A  June 30 e-mail from Project Coyote was included in the public records search and disclosed  that a representative of Project Coyote admonished Brenda Barnette for using  a rodenticide. It stated the bait traps were noticed while giving a wildlife class at the shelter.

ContraPest is described as "a sweet liquid birth control solution placed inside bait boxes in an effort to sterilize the rodents in areas with the most complaints." At that time, it was just being offered on the market and did not have a track record.

General Services wrote to LAAS on Oct. 17, that, the birth-control solution can be used in exterior locations in lieu of the bait stations, but "It is our understanding that interior traps still need to be placed to control rats inside the building. We usually use snap traps but on occasion, sticky traps, because the snap traps are not trapping the rodents."

LAAS responded -- "...We cannot use the sticky traps, it is not part of the RVT's duties to euthanize rodents."

GSD question --  "Sorry, I'm confused.  Why would the RVT's euthanize rodents? The protocol is to call (the trapping company) for disposal…or call us for disposal."

LAAS -- " I will advise them of that, but [a sticky trap] was found the next morning, not knowing how long it had been under that desk. Do they [the pest-control employees] respond 24/7, seven days  week?"

GSD -- "It is not considered an emergency and the response would be first thing the next morning."

LAAS -- "We'd appreciate them no longer using sticky traps....and we are okay with the snap traps."

GSD -- "We can use only snap traps, except when they are not working, which...does happen."

GSD (different official) -- "...the problem with trapping is the current laws don't allow to trap and relocate out of fear of spreading disease."

LAAS to GSD - "Please schedule this for treatment. They have reported that they are having a problem with rats."

LAAS - "Our next  Leadership meeting is on Thursday. I will bring it up then and get back to you."

BJ (GSD) on June 11 - "Hi, the rodent population has increased at the East Valley Shelter ...they [the leadership members] are requesting alternative options in conjunction with ControPest other than poison, snap and sticky traps."

"Maybe we could get the Pied Piper?"

LAAS - "We need to know what is in the bait boxes."

GSD (to GSD) - "I asked for a policy because they said not to continue with the rodenticides against our recommendations."

LAAS (June 12)- "I will bring this back to the table with management today in our leadership meeting..."

OTHER ANIMALS MAY CONSUME THE POISONED RATS

LAAS (June 12 - after leadership meeting ) "In addressing this at our leadership meeting, the question was asked about alternate poisons. Our Chief Vet...noticed that the poison used is a poison that transmits to other animals that may consume the dead rats/mice."

"Because of our unique situation, are there any other types of poison available that can be used that will not transmit to other animals if consumed?"

GSD (June 17 - "This same question comes up each time we have this conversation.  I'd have to check my records but as I recall, a dog would have to eat multiple rats to ingest enough poison to cause a major concern.  I believe your Chief Vet signed off on the use at SLA a few years ago."

"But I am not an expert so I will differ to (redacted name) for the expert answer."

LAAS (June 22)  - "Staff  seeing the increase at our Harbor, West Valley and South LA facilities in the buildings, with West LA, North Central and East Valley experiencing an increase outside in the kennel areas."

LAAS (June 22) - "The use of T-Rex traps was discussed with our management team and we all agreed this is most appropriate."

REDACTED COMPANY NAME - PROVIDER OF T-REX (MECHANICAL/LOCKING) TRAPS  (June 23) - "Yes, we do not use poison inside because the rats tend to die in the walls where we can't access them for removal. Trapping is the preferred method."

LAAAS (TO SAFETY COORDINATOR) - "I think this will be OK at West Valley, but a little more challenging in operational facilities.  Maybe talk about it in leadership?"

LAAS (June 22) - "Is it your recommendation to use these inside the building in place of poison?...I would need to discuss this option with our executive management team prior to its implementation."

GSD to LAAS (June 22) - "Can you answer whether or not the increase of rodent sightings have been on the exterior or possibly the interior?....Rodents will reproduce inside once they have gained access and the rodent stations won't be of much help, trapping would be the recommendation."

LAAS (June 29) - "The use of T-rex traps was discussed with our management team and all have agreed that method is most appropriate and will follow your recommendations for use of these traps inside the facility."

Hello, one of the female security guards was very excited that she caught a "rat" in a glue trap by the Konika machine in the clerical area by the bathroom. It is a mouse, but no one has removed the dead body or the other glue traps. I am not certain if they were supposed to place glue traps around or not.

Additionally, the Squad Room is a mess. There were large food particles in and all around the color printer, desk and other surfaces. Is there a way to pass on to the security company to resolve please.

LAAS SUPV.  RESPONSE (Sept. 8, 2020)  - "I saw a glue trap when I was there last and threw it away. I believe the guards are the ones using the glue traps. I will talk to Mark [safety officer] about this and the security company. I guess they ran into a problem between GSD and (Pest Control Company), so they have not started the trapping process at West Valley. I am working with GSD to resolve that issue."

"We will also let the security team know about the food-related issue.  FYI, I think we are working to get a new company in there because of all the problems."

LAAS TO GSD - "We decided that we would reinstate the poison back into the facilities while also maintaining the ContraPest until the situation is under control and talked about using the traps inside the facilities vs. the poison so the animal doesn't die in the wall or ceiling and can't be properly disposed of."

"As for as the length of time, I don't recall any time limit, just that we would continue this method until the issue is under control."

West Valley was supposed to be the premier shelter, where Barnette is creating a "hybrid" shelter by bringing in non-profit 'rescuers' and provide animals from other LAAS shelters for adoption--a plan the West Valley community overwhelmingly opposes. These organizations would be independent, with no rental charge and responsible for their own sanitation conditions at the shelter.

Will this cause more rodent issues? And who will enforce sanitation standards? Will they want to move into a building already infested with rats?

GM Barnette has not discussed these health and safety matters during her lengthy oral reports at the Commission' bi-weekly meetings. Is she deliberately hiding this from the public?

She speaks regularly about the Pet Food Pantry which provides food to needy families for pets. Is that food being stored in the rat-infested LAAS shelters?

Does Barnette believe this is NOT HER problem?

Will the Pied Piper lead the rodents away? Or will Santa Claus  bring LAAS a better rat/mouse trap?

The leadership problem at LA Animal Services may not be the team, but the leader!