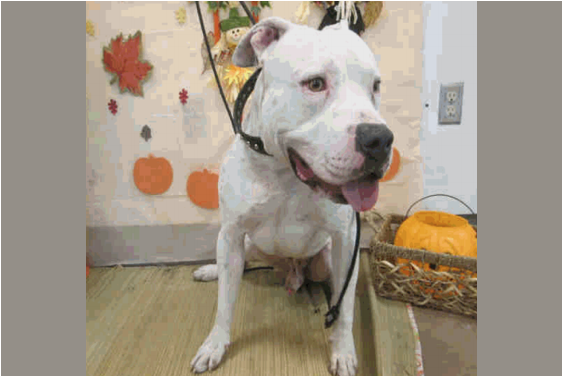 ANIMAL WATCH-When Eve Karasik, a volunteer at Best Friends NKLA (“No Kill” Los Angeles) shelter, was asked by another volunteer to take a large male Pit Bull, named “Henry,” (photo above) into the locked outdoor yard/enclosure attached to the building at 1845 Pontius Ave., in West Los Angeles, she had absolutely no warning that Henry would viciously attack her or that he had attacked in the past.

“After playing with Henry for a brief period and without provocation or warning, Henry clamped his jaws onto her right arm.” He then “mauled, tore at, and shredded her right arm, while twisting his head violently back and forth, thereby irreparably damaging tendons, ligaments, muscles, nerves and bone in her right arm and hand,” according to court documents filed with LA Superior Court (Case No. 18STCV07134). 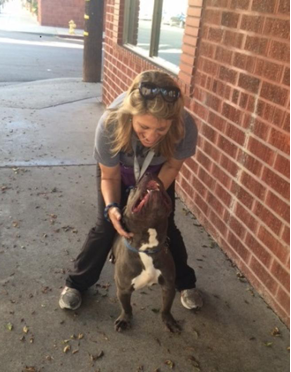 Volunteer Eve Karasik (photo left with another shelter dog) “sustained permanent and severe muscle, nerve and tissue damage and now has very limited function in her disfigured and disabled right arm and hand and she has no hope of regaining normal use.”

“Also, as she tried to stop the attack by the pit bull, she repeatedly hit Henry around and on his head with her left hand and sustained permanent injuries to that hand also,” the Complaint states.

In the Complaint for Damages filed on behalf of former-volunteer Eve Karasik by the Law Offices of Los Angeles Attorney Ronald M. Papell, it states:

“Plaintiff is informed and believes that many of the dogs in BFAS adoption facilities were abandoned or ‘owner surrendered’ dogs, including but not limited to pit bulls and pit bull type dogs that were surrendered because these dogs were ‘too aggressive’ or ‘too dangerous’ for their prior owners. Henry was no exception. Henry was a pit bull type dog that had been surrendered on multiple occasions and was known to defendants to have been involved in numerous prior attacks.”

It contends that severe personal injuries arose out of the “unprovoked, vicious attack and mauling by a pit bull / pit bull-type dog allegedly named ‘Henry’ that Best Friends owned and knew had dangerous propensities and a long history of biting, mauling, attacking and/or killing other individuals and dogs.”

“He was adopted out to several different persons/families and returned to BFAS’ adoption facilities because he was a vicious and dangerous pit bull-type dog that had bitten at least two of his prior owners or adopting family members and he had also mauled and killed another dog, among other acts,” the Complaint states.

The lawsuit also alleges that Best Friends “. . .withheld such information from Eve Karasik, as well as other volunteers, and including employees and staff members, and failed to warn them of the history of attacks by ‘Henry.’”

The enclosed yard area in which the attack occurred “was locked from the inside and surrounded by a tall, solid fence/wall that prevented outsiders from seeing through or entering. Because of the security cameras placed on the NKLA building adjacent to the yard, those inside were led to believe that they were being observed and recorded and that, if necessary, help would arrive promptly,” according to the Complaint.

“However, in truth and in fact, the video cameras were not being monitored, nor was anyone charged with the responsibility to do so.” Thus, the attack continued for an extended period until staff members eventually appeared, ostensibly to aid her and terminate the attack, but a video discloses the staff members who came into the enclosure were “untrained, unprepared and unequipped to terminate the attack or otherwise save her from the vicious and life-threatening attack.”

BFAS HAD A DUTY AND OBLIGATION TO INFORM

“Although BFAS had a duty and an obligation to inform Plaintiff and other volunteers and staff members about Henry’s dangerous and vicious tendencies, including his history of attacking others, before instructing, encouraging or allowing Plaintiff to encounter or handle Henry on the day of her attack, they knowingly and intentionally failed to do so in a conscious disregard for the rights and safety of Eve Karasik and all other volunteers and staff members.”

The complaint contends that “. . .had she been appropriately warned or advised that Henry had previously attacked and bit at least two other individuals, she would not have knowingly exposed herself to the risk of bring Henry’s third or fourth bite victim.”

“She never had a reasonable opportunity to avoid this savage attack,” the Complaint states. 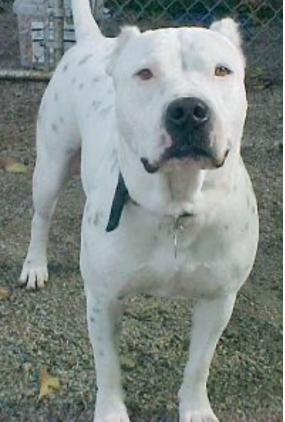 Best Friends filed a Motion for Summary Judgment that can be read in its entirety on the CA Superior Court website. It states that the Plaintiff had received their Handbook and training materials and an extra hour of training to handle “Grey Paw” dogs -- as Henry (photo left) was categorized -- and that she had been informed that Grey Paws could be “shy, and need more assistance or be larger or stronger.”

(AUTHOR’S NOTE:  Interestingly, in its volunteer material, I did not see any mention of “aggression,” or what to do in a case of attack. On a page called, “Shy Paw VS Brown Paw,” Best Friends describes “Barking, Lunging, Growling, Snapping,” as “Dogs who feel they need to defend themselves.”)

Best Friends also states in its Motion for Summary Judgment that the Plaintiff was provided with all the information that she requested about any dog, and that she had signed a waiver of liability.

The Assumption of Risk includes: “I am voluntarily participating in the activities of Best Friends with full knowledge of the risks and dangers involved and hereby agree to accept any and all risks of injury, death, or damage to myself and/or any personal property.”

The Release states, “As consideration for being permitted by Best Friends to participate in activities and provide Services, I hereby agree that I, my assignees, heirs, distributees, guardians, and legal representatives will not make a claim against, sue, or attach the property of Best Friends for injury or damage resulting from any act, omission, negligence or other acts, howsoever caused, by any employee, agent, contractor or representative of Best Friends for injury or damage. . .as a result of my participation in activities and performance of the Services and any A-V Recordings.”

In that case, it was revealed that one week after adopting a Pit Bull which Best Friends had assured would be a good “family dog,” according to the Complaint, “the dog, without warning or provocation, charged the child, who was in the family’s living room doing her homework. The dog latched its jaws onto the child’s face and ripped off her flesh. Her parents attempted to pry the dog off their daughter but could not get it to release. The child suffered serious injuries and underwent reconstructive surgeries. The parents were traumatized (see photo of victim here).

It is important for the public to be aware of these cases and carefully review contracts if considering adopting a dog, (especially a behaviorally challenged or “Shy” Pit Bull) or if you are interested in volunteering at Best Friends’ facilities.

What appear to seem just normal, boring contractual provisions may be far more restrictive and less protective than you think.

Best Friends’ “Manifesto” states, “We are the best friends of animals.”

Judging from public records and court documents, they are not extending that friendship to people, including their adopters and volunteers. The lives and safety of both humans and animals must be valued and protected in a true “No Kill” philosophy.

Edited for CityWatch by Linda Abrams.