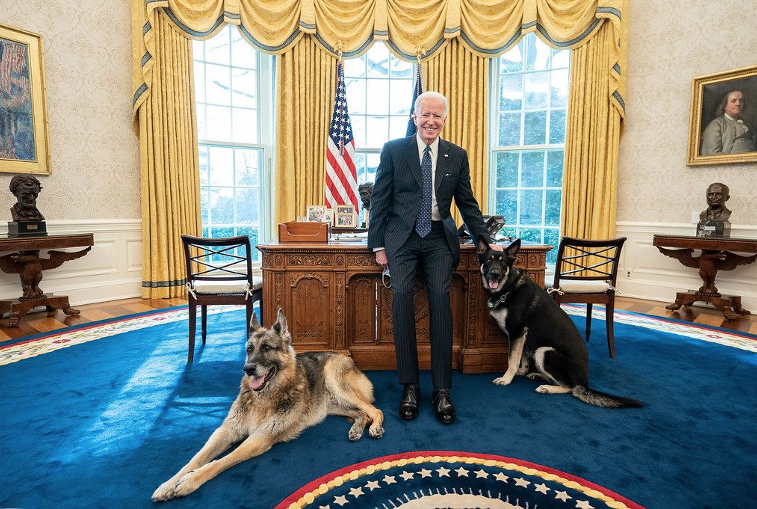 ANIMAL WATCH--It should not have been a surprise to anyone that Major, the three-year-old adopted German Shepherd brought to the White House by Joe and Jill Biden, bit a security guard.

According to media reports, Major had been giving notice that he was not pleased with the new faces of the staff and/or the relocation to the First Family’s Washington, D.C. domicile, but it appears everyone ignored—or did not take seriously—his warnings.

Here’s a basic description of this breed, explaining it can be a great family companion but also has a strong protective instinct that must be addressed and not underestimated.

“German shepherds may sometimes become anxious or even aggressive if not properly trained and handled,” says Spruce Pets. “These dogs will ideally be trained to perform a duty and will take pride in such. Be sure to thoroughly train your GSD. The breed's intelligence and desire to work should make training fairly easy.”

“Proper socialization is also necessary to make sure your GSD does not become stressed or scared when meeting new people or animals and seeing new environments. They are typically aloof around new people and may be suspicious.”

Under the subtitle of “Rescue Dogs,” is this advisory, “You can glean a lot of information from the dog's body language and response to environmental triggers (including places, people, or other elements). Let your rescue dog set the pace of the socialization.”

There does not appear to have been any special training or temperament evaluation provided for Major. Possibly this is because the Biden’s had fostered him before adopting and he and his littermates were reportedly at the humane society since they were a few weeks old, surrendered by an owner, “who couldn’t afford to care for them.”

The Bidens’ undoubtedly were also influenced by the gushing comments about the puppy by volunteers and the humane society’s description.

And their experience with their now-13-year-old GSD, Champ, may have been much different and possibly behaviorally flawless.

THE BITE CANNOT BE IGNORED NOR MINIMIZED

Perhaps the greatest danger to Major is that this reaction will not be taken seriously or will be explained away by any of the politically correct descriptions that have appeared in the media.  But, a dog bite is a serious matter, whether or not serious damage was done. The dog is speaking in his first language—direct action.  Major is just reaching his full maturity at three years of age and suddenly the responsibilities of this innately protective breed will be exhibited.

No one knows exactly what happened after the bite, but there was no indication that he was verbally or otherwise corrected (even with just a firm “NO”). A lack of response could lead Major to believe that he had done his job correctly.

He may have perceived that his master was in danger, or at least there was a new person who was apparently too close for the dog’s comfort.  So, he spoke in his most vivid language—he elevated his (probably) initial barking to “attack” mode to stop the intruder.  There were reports that he had been barking at staff and strangers since being moved to the White House.

WHAT IS MOST ALARMING

Since, there is no indication in any of the reports on this incident that Major was constructively verbally reprimanded for the bite, it is possible that all he heard was excuses for his action, not displeasure by someone in control and whom he respects.  To be effective, the reprimand would have needed to be given within a couple of seconds of the dog’s action, a K-9 training expert commented.

If he did not sense displeasure by his owner, most dogs assume that is an affirmation that the correct action was taken—he made his owner safe. So, he is likely to repeat the “successful” behavior.

Most alarming is that there has been no comment that the Biden’s would be hiring an experienced trainer/behaviorist to evaluate the incident. And, also, it is not known if this is actually the first bite by Major. Could he have “nipped” anyone before and it was disregarded or interpreted as an accident?

Unfortunately for the dog, all the reports state that he was merely removed from the location.  That does not provide him with the feedback he needs—that biting a suspect may be all right in a job as a police K-9, but not as the First Dog in the White House. How is he otherwise supposed to know the difference?

With the First Lady reportedly leaving for a prolonged trip, without professional intervention, Major could repeat his now-assumed role of protector while she is gone and it may become more deeply embedded in his adult behavior.  That can be sad for both the dog and his family.

CAN GENETIC BEHAVIOR BE CHANGED?

Shepherds and other dogs with strong protective instincts can become a danger to anyone, including their owners or family members, who may become the victims of misdirected acts.

A former K-9 officer and trainer advises that an undirected (one that was not ‘on command’) bite response is not easily changed—especially once fortified by a lack of immediate correction.  It also depends upon the genetic makeup of the particular dog. Even with training, it sometimes cannot be changed because it is instinctive to the dog. He states, “Training can only be effective when we know—from the dog’s perspective—what motivated the dog to bite.  It is often very difficult to identify in all of the factors in a bite situation, which one or combination was the true trigger.”

Will a dog bite again?

Pat Miller, who has a long string of credentials and is the training editor for Whole Dog Journal, explains an owner's options in this situation.

What to Do If Your Dog Bites Someone

If your dog bites, you have at least four options. You can:

She states initially, “This is never a happy outcome. Still, you need to think long and hard about this dog’s quality of life. If you can only manage his behavior, will he be happy, or miserable, being shut out of the activities he loves? Can you guarantee that the home you find for him will treat him well? Once a dog bites, will he bite again?”

MAJOR WAS ADOPTED BY THE BIDENS AS A PUPPY

On November 17, 2018, the Deleware News Journal reported, “After fostering Major, the Bidens adopt the German shepherd as part of family,” and states that Major had been in the Biden home since March.

Joe Biden reportedly learned about the pup when his daughter saw a Facebook post about the litter of German Shepherds dumped at the shelter. The Delaware Humane Society stated that, “Biden's staff members picked up one of the dogs and brought him to the family home, where he has been for the last eight months,” according to the Journal.

The humane society director said that then-VP Biden came in personally eight months later and that Major was a “playful, affectionate and outgoing puppy.”

There is no question that Major is loved by the Bidens, but love is not always enough. Realistic action is also necessary to assure that this is just a one-time incident.

President Biden now has the opportunity to publicly set the standard for responsible dog ownership by sharing Major’s progress and honestly discussing this as a serious, but common, issue that must be faced in the spotlight, just as openly as the celebrated adoption of a dog with an unknown heritage, for which he and the First Lady are to be highly commended.