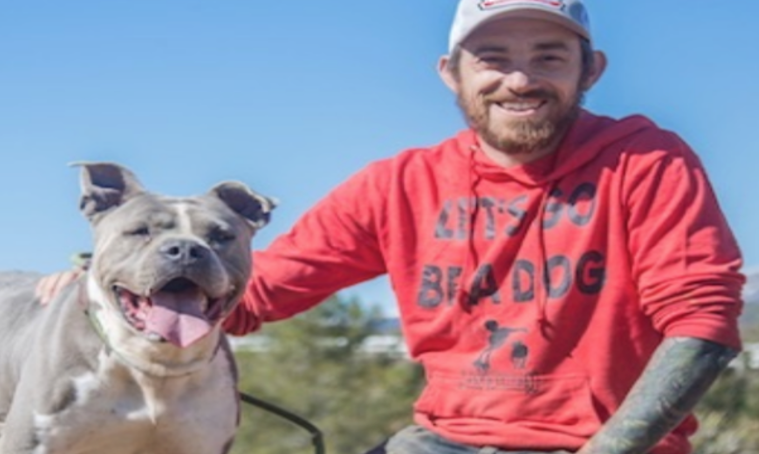 Baldwin, founder of Save Them Dog Training  and co-founder of Underdog Alliance was originally taken into custody on July 24, 2020, by the Los Angeles County Sheriff's Department and held  for arraignment on 42 felony and misdemeanor charges -- 13 of which involve animal cruelty. All stem from alleged criminal activities in Ohio and California.

Baldwin was a hero among "No Kill" advocates. When Los Angeles Animal Services GM Brenda Barnette, announced the 2018  opening of Weingart Center for the homeless and their pets on downtown LA's Skid Row, the LA Times  stated that Steffan Baldwin had been selected as the dog trainer for the facility.

As recently as December 12,  2019, his Save Them Dog-Training ranch in Acton, CA, brought gushing public acclaim from Best Friends Animal Society for his "life-saving" work and giving dogs "the second chance we all know they deserve."

But  Baldwin's professional life took a dark turn when an investigation began into allegations that Pit Bulls and other dangerous dogs he supposedly "saved" had actually been euthanized after he received large amounts of money from owners and/or rescue organizations for their "second chance" redemptions.

"We always said it was a matter of time before Underdog Alliance would implode," Sharon Logan of Paw Protectors Rescue, commented, "Who didn’t see this train wreck coming? There is no way one organization can pull 18 behavioral dogs within a matter of weeks, and ethically or humanely care for them. There is no magical abundance of foster or adoptive homes for these behavioral dogs. This was a huge Red Flag!"

Steffen Baldwin, aka Steffen Finkelstein, now 40, was extradited from California to Ohio in June 2020 after being charged with "engaging in a pattern of corrupt activity, bribery, 15 counts of telecommunications fraud, 13 cases of cruelty to animals, six counts of tampering with records, two counts of grand theft, two counts of falsification, and one count each of grand theft of a firearm and impersonation of a peace officer."

Court documents contend that Baldwin would purport to take dogs to rescue, train or rehome them. He would allegedly raise money for the care of the dog, but rather than help them he would  often have them euthanized.

The indictments indicate Baldwin took funds from a variety of animal shelters, organizations and individuals throughout the state and nation.

The second arrest, announced by the Marysville Journal-Tribune on December 17, states he was arrested again last week and charged on Tuesday with a bond violation, after he "allegedly tested positive for opiates." Union County court papers show he has  again been released.

In August, when Baldwin was arraigned,  bail was set by Judge O'Conner at $200,000, at the  request of Assistant Union County Prosecutor Melissa Chase, who indicated she considered Baldwin, “a flight risk.”

Upon consideration of the plea by Baldwin's defense attorney, the judge agreed to release  Baldwin upon 10% payment of the bond. At that time, court documents indicated  Baldwin was residing at the Extended Stay of South Dayton.

As part of the bond agreement, Baldwin was specifically told by the judge that a positive test for any unprescribed drugs or refusing to submit to a test for drugs or alcohol could result in revocation of his bond.

Baldwin was reportedly involved in a vehicle crash in October, which resulted in "serious injuries."

There were no details provided regarding the nature of the auto accident and it was not indicated whether one or multiple vehicles were involved. Baldwin reportedly was living at a convalescent hospital during his recovery.

He is contesting the results of the drug test, "contending that he is taking medication due to the surgical procedures he underwent after the accident"

According to court documents, Judge Mark O’Connor agreed that the test results "would not be out of line with what would be expected for someone having undergone the procedures." Although he released Baldwin, he ordered further testing of blood samples before making a final determination.

Baldwin had previously been ordered to appear in court on Wednesday for an evidentiary hearing. According to documents submitted, he contends that some of misdemeanor charges should be dropped because the 24-month statute of limitations has expired. The hearing will continue on January 8, 2021.

If convicted on all counts, Baldwin could face more than 81 years in prison.

Baldwin appears to have assumed a new persona, evident in his "before and after" photos, showing his current facade of modesty and almost piety, contrasted to his recent past as a flamboyant LA "sex symbol," flaunting tattoos and fearlessness in handling and supposedly rehabilitating known-dangerous Pit Bulls, and engaging a growing throng of adoring followers -- largely female.

But police and court records tell a different story.

"I am not sure we are ever going to know the total number of animals he killed, ”Union County Prosecutor Dave Phillips told the Marysville J-T. “I certainly think the total exceeds the number of indictments.” Phillips said investigators began looking into Baldwin's activities in 2017.

“The allegations indicate the money he raised for the animals, even after they were euthanized, was used for his personal expenses,” Phillips said, listing gifts for his girlfriend as well as strip clubs."

In an August 5, interview, Detective Jim Conroy told 10TV that Steffen Baldwin’s goal was to be a star on Animal Planet, "by any means necessary, even at the expense of animals, he had pledged to protect."

Conroy said Baldwin’s aim was clearly to become a star by tying himself to "as many animal organizations as he could to build up his reputation as an animal advocate. He says eight production companies made offers, and at least four signed Baldwin with the goal of pitching him to Animal Planet."

He added, “If the allegations prove true, it’s a shame that someone uses animals for their personal gain.”