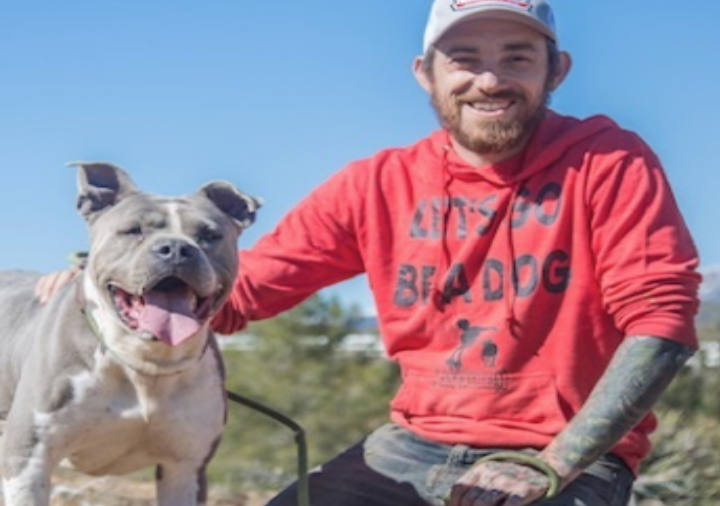 ANIMAL WATCH- Pit Bull/Dangerous Dog Trainer Steffen Baldwin, 39, of “Save Them Dogs” and co-founder of Underdog Alliance, was taken into custody as a fugitive on July 24 by the Los Angeles County Sheriff's Department and held without bail for arraignment on July 28 on 42 felony and misdemeanor charges stemming from alleged criminal activities in Ohio and California.

Thirteen of the charges were for various acts of animal cruelty.

Yet, when Los Angeles Animal Services GM Brenda Barnette and Lorie Weise, founder of Downtown Dog Rescue, celebrated the opening of a dog park for pets of homeless humans at the Weingart Center on Skid Row on August 10, 2018, Steffen Baldwin was  present and interviewed by the Los Angeles Times as the Center’s dog trainer.

And, Baldwin has been publicly acclaimed in gushing terms by Best Friends Animal Society as recently as December 12, 2019, when a post invited readers on Sunday, December 15, to, ". . .join us for an open house at Steffen Baldwin’s Save Them Dog Training Ranch in Acton, CA . . . we’re looking forward to giving you a glimpse of Steffen’s lifesaving work providing solace and rehabilitation for shelter and rescue dogs with bad raps, giving them the space, patience and second chance we all know they deserve."

THE WOMAN WHO WARNED OF A 'DARK SIDE'

Sharon Logan, founder of Orange County-based Paw Protectors Rescue, says she had received on-going pleas from the owners of Remi and Gucci -- two Pit Bulls that were supposed to be rehabilitated and placed in adoptive homes by Steffan Baldwin of "Save Them Dogs."

She said she has been alarmed for the past few years by reports of the disappearance or deaths of dogs that Baldwin has taken in to allegedly train and place in loving adoptive homes (with a hefty amount of money paid for that service).

She was aware that Steffen Baldwin had been taken into custody in Palmdale, CA, and was scheduled for arraignment on July 28, but was still shocked by the extent and severity of the charges.

Remi (Rembrandt) and Gucci are names of two Pit Bulls that appear in the 24-page indictment by the Logan County (Ohio) Court of Common Appeal, which Logan made public on Facebook last week after Baldwin's arraignment and which includes 13 counts of felony "Cruelty to a Companion Animal."

Logan's piercing investigation and disclosure of impropriety in the policies of the Orange County Animal Shelter preceded the sudden  departure of Director Mike Kaviani last year.

And, her year-long pursuit of information about the drugging of dogs with histories of aggression and not revealing that information to adopters was the impetus for David Goldstein's CBS Investigative report  Local Animal Shelter Isn’t Telling All About Some Dangerous Dogs Up For Adoption, on November 18, 2019.

Baldwin reportedly removed 18 'behaviorally challenged' dogs from the Orange County shelter during that investigation and 9 almost immediately afterwards. Logan says Kaviani and Baldwin knew each other while Kaviani was working for Austin Pets Alive.

"We are not anti-pit bull, we are anti-Steffen Baldwin and anti-Underdog Alliance," Logan states, "We are anti-anyone in the Bully arena who chooses to push a false narrative driven by their own ego, greed, agenda."

In a July 31, 2020, Marysville Journal-Tribune article, Animal Advocate Indicted by Grand Jury, a photo of Steffen Baldwin, bares this description, "Steffen Baldwin, former chief humane agent for the Union County Humane Society, shown above, has been indicted for allegedly killing dogs and stealing from those looking to help the animals."

This in-depth article by Mac Cordell of the Tribune, reports that former chief humane agent of the Union County Humane Society, Steffen Baldwin, 39, "could now be facing more than eight decades in prison for allegedly killing dogs and stealing from their owners."

Baldwin remains in the custody of the Los Angeles Sheriff's Department for up to 30 days, after being indicted by the Union County (Ohio) Grand Jury on 42 felony and misdemeanor counts at a June 28 arraignment in Superior Court. The charges include 13 counts of alleged animal cruelty and allegations he “did negligently, needlessly kill” at least eight dogs.

According to the Tribune, Union County Prosecutor Dave Phillips stated, “I am not sure we are ever going to know the total number of animals he killed. I certainly think the total exceeds the number of indictments.”

The charges have been carefully laid out and include engaging in a pattern of corrupt activity, bribery, telecommunications fraud, tampering with records, grand theft, falsification, and one count each of grand theft of a firearm and impersonation of a peace officer.

A CLOSER LOOK AT SOME ALARMING CHARGES

The entire 42 count indictment can be seen here on the Paw Protectors Rescue site.  Following are just a few of the gruesome and very disturbing descriptions:

... did, as an owner, manager, or employee of a dog kennel who confined or was the custodian or caretaker of a companion animal, knowingly torture, torment, needlessly mutilate or maim, cruelly beat, poison, needlessly kill, or commit an act of cruelty against the companion animal, to wit:  Remington.  [A Pit Bull called  "Remi."]

... did with purpose to deprive the owner, Animal Cruelty Task Force of Ohio or its Not-for-Profit Successor, of property or services, to wit: .45 caliber Glock Model  21, Serial No. WBX926, knowingly obtain or exert control over either the property or services without the consent of the owner or person authorized to give consent.  Furthermore, the property stolen is a firearm or dangerous ordnance.

Count 14 – Impersonation of a Peace Officer or Private Police Officer

... did impersonate a peace officer, private police officer, or investigator of the bureau of criminal identification and investigation, or a federal law enforcement officer.

... was an owner, manager, or employee of a dog kennel who confines or was the custodian or caretaker of a companion animal and did negligently needlessly kill the companion animal.

... Unnecessary or unjustifiable pain and suffering is caused or allowed to continue

Count 42 – Engaging in a pattern of corrupt behavior

Prosecutor Phillips said investigators began their investigation of Steffen  Baldwin shortly after he left Ohio and moved to California.

"Baldwin would allegedly tell people he was taking dogs in to rescue or adopt them. “Then he would raise money for these dogs – for their care, for their adoption, for their training – but had allegedly euthanized them,” Phillips said, adding that Baldwin  had, “a pattern of lying to people to raise money.”

“The allegations indicate the money he raised for the animals, even after they were euthanized, were used for his personal expenses,” Phillips said , listing gifts for his girlfriend as well as strip clubs."

According to the report Baldwin will not fight extradition to Ohio.

Baldwin reportedly helped start the Animal Cruelty Task Force of Ohio, was a Humane Agent for the Union County Humane Society and co-founded the Ohioans Against Breed Discrimination, a Political Action Committee, to stop laws banning or restricting ownership of Pit Bulls. However, his career in humane law-enforcement seemed to run into some serious problems.

Since 2018 Baldwin has run a dog-training kennel in Acton, CA, and claims to use "decompression" to resolve aggression issues and rehabilitate dangerous dogs,  mainly  last-chance Pit Bulls.

Sharon Logan of Paw Protectors is not the only one concerned about Steffen's "Save Them Dogs" training  at the Underdog Alliance.  (See a detailed chronology by Animals 24-7 here.)

Baldwin also grabbed the attention of  "Scorched Earth, the Politics of Pit Bulls," which provides a meticulously detailed and well-documented questioning of Steffen Baldwin's resume and  background, his claims about his military career, education, and more on his Linked-In page:

The first listing is United States Army Imagery Ground Station Operator/Paratrooper with dates July 1998 to December 2001.  How did one person spend three years at West Point to get a four year degree in a field that is not offered by West Point and in the same time frame serve as a Ground Station Operator and Paratrooper, discharged from the Army in 3 years and six months ?

Six months after Army discharge Baldwin begins an entry level job as a Youth Sports Coordinator, current salary for this position is $11 per hour.

In 2008 Baldwin comes to Ohio for a position as Executive Director of the Union County Humane Society, a private Humane Society with more members on the Board of Directors than actual employees. Baldwin quit this job in 2013 stating that his heart was in the field and with Humane investigations

According to a post on his Facebook page dated March 10th the resignation was not that simple. He had been written up for what his board of directors considered to be inappropriate use of time, according to Scorched Earth.

BALDWIN'S PRESENT  (BEFORE HIS RECENT ARREST)

Since  2018  Baldwin has reportedly run a dog-training kennel at 32035 Mountain Shadow Rd, Acton, CA 93510 (Los Angeles County),  a property which shows it sold in August 2018.  He describes it as usually housing 35 to 40 condemned dogs and claims to use "decompression" to resolve, aggression issues and rehabilitate dangerous dogs,  mainly  last-chance Pit Bulls.  There is an ominous tall blue barn on the property which appears to have no windows.

His profile on the Underdog Alliance page states,"Steffen is the owner of Save Them Dog Training which focuses exclusively on reactive dogs with bite histories." He states he has presented at the Austin Pets Alive! No-Kill Conference," has written extensively on pit bulls and animal rescue for the Huffington Post and has published a children’s book that delicately addresses dog fighting and dog reactivity. "

His business partner is shown as Dr. Saskia Boisot, who describes herself as a human physician who practices pathology in Orange County, CA, and specializes in the diagnosis of leukemias and lymphomas.

The site states she "formed a new 501c3, Underdog Alliance, with her rescue partner Summer Parker, and dog trainer Steffen Baldwin. . .specifically focused on providing solutions for large breed dogs experiencing behavior challenges in the shelter environment. . .and occasionally, providing sanctuary to intractable behavior cases who would otherwise not be afforded the chance at a live outcome."

IS THERE  LESSON IN THIS FOR ANIMAL SHELTERS?

Los Angeles Animal Services GM Brenda Barnette is currently proposing that one of the City's valuable, municipal (public) animal shelters be turned over to "rescue" groups, abdicating the City's responsibility for the animals' care/outcome and on-site veterinary availability, crippling Los Angeles' ability to maintain a strong  law-enforcement presence in much of the city by cutting ACO staffing from that shelter, and she has removed impoundment of lost pets at shelters as a mandate--allowing them to be kept by "finders."

Under her plan, unwanted pets or strays will be accepted by appointment -- which now involves a two-week wait. Animal Control Officers no longer routinely pick up strays on the street because, Barnette says, if you leave them where they are, the owner will find them within 24 hours in most cases, "according to a study."  (Did that study indicate how many are injured or killed by cars before the owner gets there?)

If you don't think this is dangerous for animals --and your lost, missing pet--consider it in light of the charges against Steffen Baldwin, a former Humane Society Director, and, more recently, founder of "Save Them Dogs" Rescue and Underdog Alliance in Acton, CA.

STEFFEN BALDWIN'S FUTURE AND A WARNING ABOUT "RESCUE"

Steffen Baldwin has not yet been convicted of any of the charges against him.

But this is an alert to the public and pet-lovers that surrendering an animal to "rescue" does not always assure its safety or humane treatment.

While some rescues are deeply committed to quality care and responsible placements, there is a darker side of this movement that is focused on money.

The MUTUAL goal of “rescues” and shelters must be to spay/neuter, provide proper care and sheltering of all animal,  and demand strict animal law enforcement -- with the goal to decrease the need for “rescue” -- not to create a money-hungry, unregulated industry!

Note:  Updates on Steffan Baldwin's case will be provided. . .so check back with CityWatch.