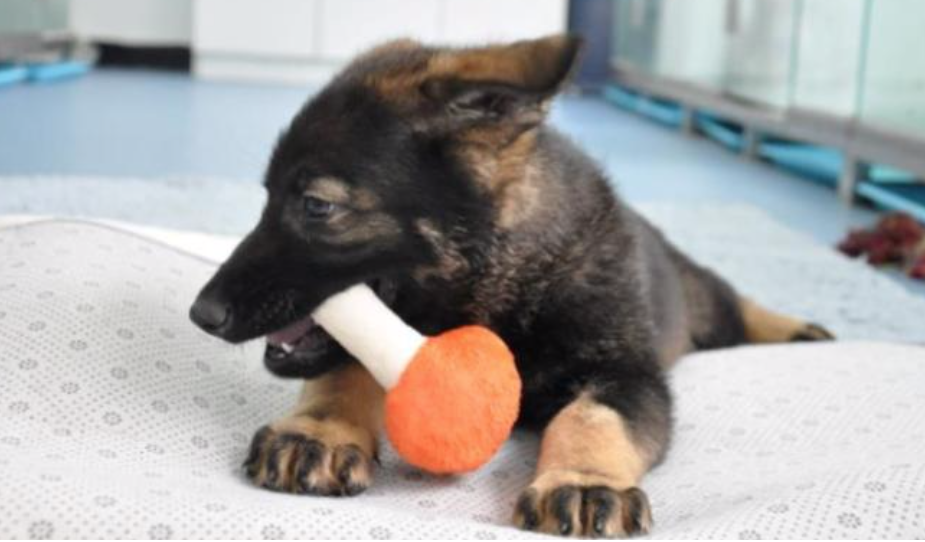 ANIMAL WATCH-Scientists from China's Yunnan province have successfully cloned a Kumming wolf dog, named Kunxun, (photo above) from a "great canine detective," and predict she will be the “Sherlock Holmes of police dogs,” according to the Global Times.

Kunxun weighed only 1.2 lbs. (540g) and was about 9 nine inches long (23 cm) at birth on December 19, 2018. The adorable puppy, now three months old, has begun training this month at a base in Kumming, Southwest China's Yunnan Province.

The puppy was reportedly cloned from somatic cells (commonly used in cloning) from the skin of a 7-year-old female German Shepherd, Huahuangma, who has resolved 12 cases and been involved in 20 other investigations. In 2016, she was given the first-class meritorious dog award by China's Ministry of Public Security.

Kunxun is reported to have 99% of the DNA of Huahuangma. After creating a cloned embryo, it was implanted into a beagle for birth, according to the state-owned Global Times. She is already being trained in drug detection, crowd control, and evidence search. It is expected she will become an active K-9 and ten-months of age.

On March 5, Kunxun is showing "a better potential" than non-cloned Kumming wolf dogs already, the base's leading researcher Wan Jiusheng told the Science and Technology Daily," according to  CNN reports.

I asked a California officer whose K-9 (an imported German Shepherd) was on the streets for eight years, if he would want to clone him. He responded:

I would not, because so much of who we are is not our DNA but our experience. Having a clone would be a physical copy, not a copy of the personality. The clones would provide the pattern for traits and behavior, but without the same experiences -- especially during the impressionable period of a police dog's life it makes it different. Having a cloned animal leads to expectation it will be identical to the old partner, and sets the handler up for disappointment.

I would want a new dog so it would be expected to be a new relationship to be valued in its own right, in contrast to always being a comparison --or shadow-- of the previous relationship.

The launch of this program to create a cloned "Sherlock Holmes of police dogs," is the beginning of what is intended to mass-produce cloned dogs, to reduce the time and cost of training police dogs, which is currently estimated (in China) as high as 500,000 RMB ($74,492.50 on 3/31/2019.)

Cloning could raise many ethical questions about cloning animals, including issues specific to police forces. Not everyone wants an entire unit of virtually identical K-9's. And, there are risks that any genetic weakness could be multiplied, and a large portion of the force could be vulnerable to diseases or other hard-to-predict issues.

"Training for police dogs usually takes as long as five to ten years, and the cost for raising one police dog is as high as 500,000 RMB. Also, spending all this time and money does not necessarily mean that every dog can be a police dog. So we started a program to raise clone police dogs to reduce time and cost, but Sinogene's general manager Zhao Jianping says that the problem of cloning costs has not been solved yet.”

As of March 2019, the cost per clone police dog has not been disclosed.

The program is a joint effort of Yunnan Agricultural University in Yunnan Province and Sinogene Biotechnology Company in Beijing with support of the Ministry of Public Security of the People's Republic of China.

See also:  Cloned Dogs and Cats: Could They End Puppy Mills, Breeders and the AKC?

(Phyllis M Daugherty is a former employee of the City of Los Angeles and a contributor to CityWatch LA.) Edited for CityWatch by Linda Abrams.