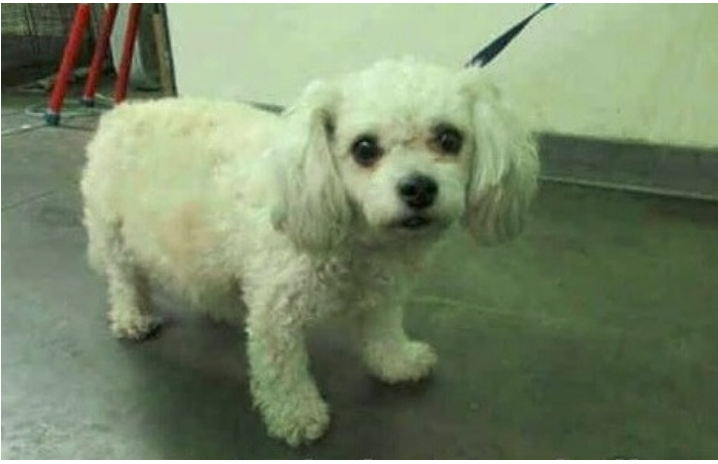 Koretz issued a letter to the Commission and held a special hearing to advise the GM that he had not passed a puppy-mill dog/cat ban so that the shelters could allow puppies to be born in the shelters.

Last Tuesday Barnette brought the matter before a new Board, (L.A. Animal Services GM Barnette Again Wants Puppies Born in Shelters to Increase Revenue), stating that the 2013 Commission had suggested this idea be reviewed when fewer dogs were being euthanized. Two of us who attended all the 2013 meetings on this subject were present and agreed we did not hear any discussion of future hearings on this proposal.

The current campaign launched by former-dog breeder Barnette to stop late-term spays of pregnant dogs in LA shelters, as usual, placed the responsibility for the destructive proposal on "a rescuer who came to me with this idea..." or "new support...."

In 2013 and currently, Barnette has failed to discuss animal-welfare (or lack thereof) concerns in promoting the birth of more dogs in a city where many communities are plagued with packs of dogs that endanger and attack residents and where sick, starving dogs are scouring the streets for food constantly. (LA has consistently been among the top cities on the U.S. Postal Service's list of dog attacks on carriers since Barnette has managed LAAS.)

However, she repeatedly mentions anticipated profit from these shelter-born puppies and providing ongoing puppy-stock for the retail-rescue pet shops.

She also has evaded any discussion of the increased risk to an older dog whelping puppies and that breeders and veterinarians warn of the dangers to the dog and pups, which often require a C-section to deliver or face other life-threatening complications.

It was strongly opposed by speakers representing long-standing, credible organizations, including Actors & Others for Animals, Downtown Dog Rescue, PETA, and the Amanda Foundation.

Two of the five proposal supporters present claimed to "pull" dogs from LAAS shelters. However, their focus quickly turned to "Snowball," because they had been involved in stopping the scheduled spay of a pregnant white poodle that was at least 7 years old (according to shelter veterinary personnel) and was found in the streets near downtown and impounded at the South LA shelter.

One “rescuer” frantically demanded information about what happened to Snowball and said no one could get any information on where she is or her current status.

Commissioner Roger Wolfson candidly announced that Snowball had died. Barnette quickly admonished him that her email about the death of the little dog was only for the Commission, not the public.

After eight years on the job, the GM of LA Animal Services does not know that, as a public servant paid by the taxpayers, she cannot legally withhold information which can affect public policy she is trying to influence.

She then explained that Snowball had come back to the shelter and died while being taken for a short walk by a vet. The supportive attendees demanded more information and Barnette said Snowball's puppies had been "saved." (She did not discuss their condition or whether they were alive.)

While Commission President Larry Gross stated he had reservations about the change in LA spay law, he still voted to continue the item for more statistics. Newly appointed Commissioner Jose Sandoval, who is the founder of a spay/neuter organization in the Valley and works in various aspects of animal welfare, strongly opposed reversing a policy that has cut impounds by over 50 percent and achieved a statistical "no kill" level for dogs in LA.

BARNETTE IS UNDAUNTED IN EFFORT TO CHANGE LA POLICY

Brenda found an ally in an Orange County Register writer, with no apparent familiarity with animal issues, but who included a long quote by an anti-abortion, religion-based group founder, criticizing LA's spay policy in an article condemning late-term spays.

This same writer (who appears to have a personal agenda and no animal-welfare experience) then CELEBRATED the death of SLA shelter dog, Snowball, with the insensitive title, "Snowball, the LA poodle, dies after inspiring movement to stop spaying pregnant dogs at shelters." She expressed no remorse or sadness about the alleged death of the animal but praised the Commission for continuing the hearing on changing the LAAS policy.

If Snowball had been spayed, she may have still been alive and in a loving home. 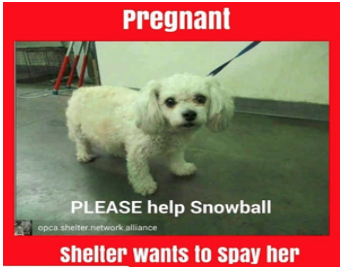 Snowball was brought into the South LA shelter on Jan. 5, at 4:40 p.m. as a stray found at 14th and Hooper St., just south of downtown.

Immediately at the top upper right corner comment box, a note is posted, "See memo A. Ramirez #081." (Annette Ramirez is the Director of Field Operations -- a highly paid position to be directing a stray-dog adoption.) Ramirez is also widely known as part of the S.M.A.R.T. team.

--She was fostered to: "ANONYMOUS UNKNOWN" at 1234 N. DO NOT CHANGE ADDRESS 1234. (The valid name of a shelter foster or adopter is required by law.)

--Snowball’s medical history showed she was "Pregnant" and had "severe dental DZ [disease]." But otherwise, no abnormal condition or health issues were found, other than being pregnant.

--On 1/06 a Lateral Radiograph of Abdomen was performed with "Fetus seen." (This is not a routine procedure upon impound. Snowball was apparently otherwise in good health for an approximately 7-year-old, 19-pound dog, who was visibly pregnant, Therefore, Snowball could have been spayed (as required by CA state law and LA City ordinance) before adoption.

-- On 1/05 the Veterinary Technician who examined Snowball prescribed an antibiotic, Clindamycin to be given twice a day for seven days.

--ALSO, on 1/06 the antibiotic was stopped. A note by a different employee states, "Take off meds until has babies or is spayed."

On 1/06 a note was placed on a new page of Snowball’s record that “Network Alliance is networking her for rescue placement.” This was the second day of impoundment and before her legal hold was ended.

Further notes were entered at the bottom by shelter staff on 1/07 that “There are two of the rescuers inquiring about this dog (names are given.) “I explained that the dog will be checked for medical on January 10th and there will be a determination if dog is going to be sent for spay or not." (#530)

On 01/09/18, there is a Memo Text by A. Ramirez #081, “Per Executive Leadership Team, this dog is not to be sent for pre-spay. If dog does not whelp prior to available date a decision will be made at that time regarding the best course of action."

On 1/10/18, there is another Memo Text by A. Ramirez #081, “Foster approved by Executive Leadership Team, refer any questions to DFO [Director of Field Operations] Ramirez or AGM [Assistant General Manager] Webber.”

There are also notes at the bottom by A. Ramirez about decisions “per Executive Leadership Team” and then on 1/10/18, again by A. Ramirez, “Foster approved.”

--The “Foster” Information was not updated from, “Unknown, Anonymous.”

--There is no further record of Snowball, including her returning to the shelter, where GM Brenda told the media and the Commission the dog had died.”

--If Snowball died in the shelter, the records must indicate that. Foster status is a temporary placement, not a permanent transfer. IF “Snowball” was in foster, she should still be under LAAS inventory and responsibility. If she had been permanently transferred, the “Foster” status was not accurate.

--And, why wasn't there a necropsy in such a high-profile situation?

Barnette told Commissioners that Snowball died while with a shelter vet, but her puppies were “saved.” Since she had not whelped, was a caesarian-type surgery performed on a dead dog by shelter staff (without a record)?

If Snowball did NOT return to the shelter, as the records indicate, where is she? Dead or alive?  At the home of a foster or a City employee?

If she died, where is her body? In a shelter freezer? Or dumped as trash?

WHERE ARE SNOWBALL's PUPPIES?

And, what happened to her puppies? Barnette says they were “saved.” Was she cut open at the shelter and the puppies removed? Did they die? Where is the veterinary record?

Where are the newborns and, if alive, how is the shelter assuring they are getting care? (They are still the property of LA City while fostered and the public has a right to know.) Who is paying for any current or past care?

Did LAAS return the puppies (or their bodies) to “Unknown Anonymous?”

The City could have avoided all of this by spaying Snowball.

Will Brenda Barnette pay this bill?

At the Commission meeting, Barnette said she had made Councilman Paul Koretz aware of not spaying Snowball and implied she had his agreement. Does Koretz know the rest of the story?

It is hard to believe that a Councilman who was so adamantly opposed to allowing dogs to have puppies in shelters in 2013, would suddenly approve of this arrangement by which Snowball was removed from the shelter, which possibly caused her (alleged) tragic fate.

Brenda Barnette has admitted that her reason for not wanting to spay pregnant late-term pregnant dogs is to raise revenue—both in the shelter and through providing puppies to the retail-rescue pet shops created by Councilman Paul Koretz.

It is unlikely Brenda's “Executive Leadership Team” acted without her approval and input. Under Barnette's watch, an animal without rabies shots and not spayed was deliberately outsourced to an "unknown" person by two of her highest-level managers.

Failure to vaccinate a dog for rabies is a misdemeanor under State law. Legal experts say the complicity of more than one person involved in violating laws can be considered “conspiracy,” which can be a felony. There is little tolerance in the law for manipulating information as a government employee.

The silence about Snowball is deafening. It is time for GM Brenda Barnette to show the records and provide proof of what happened to Snowball and her puppies!

IF SNOWBALL HAD BEEN SPAYED BY LA ANIMAL SERVICES AS SCHEDULED, SHE COULD BE SAFE, WARM AND LOVED IN A NEW HOME NOW.

(Phyllis M. Daugherty is a contributor to CityWatch and a former LA City employee. She is currently employed by the U.S. Postal Service.) Prepped for CityWatch by Linda Abrams.