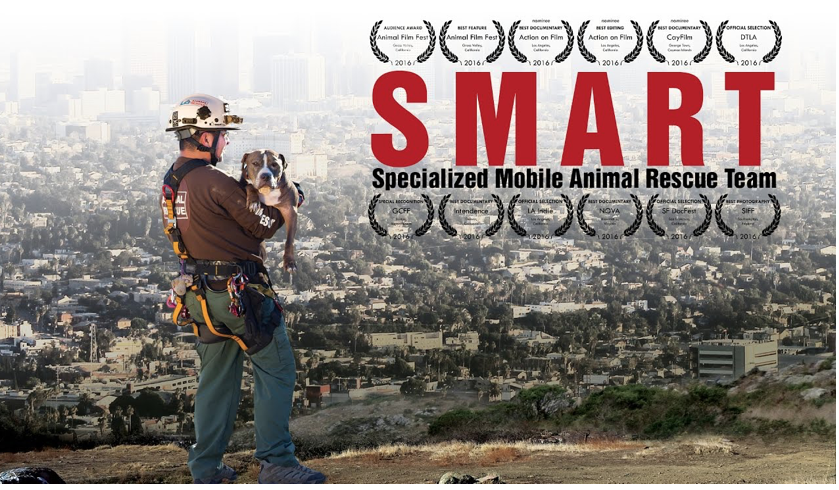 ANIMAL WATCH-Ask LA Animal Services’ GM Brenda Barnette about her officers' heroic actions for animals in the increasingly dangerous streets of Los Angeles and it is likely she will recite the latest news broadcast on the exploits of the Los Angeles Specialized Mobile Animal Rescue Team (SMART) -- praising Armando Navarrete, Annette Ramirez and Ernesto Poblano.

The officers from LAAS who volunteer to work on the SMART team go to extraordinary measures on these rescues and they engage in dangerous activities far beyond their job descriptions (and possibly not reviewed carefully enough by LA City Risk Management). But does effective leadership necessitate taking an entire team and a video camera to the "rescue" of a Canadian goose with an injured leg or a cat in a tree, when a single LAAS Animal Control Officer performs daily tasks such as picking up injured animals in heavy traffic or removing aggressive Pit Bulls?

On August 1, NBC reported on the LA Animal Services' Specialized Mobile Animal Rescue Team (SMART), “You Suit Up like Superman and Go Save Animals,” in which Sydney Kalich said the Specialized Mobile Animal Rescue Team, started in 2008, was "founded to provide additional support for LA Animal Services." But it seems at least two of the self-proclaimed "elite" team leaders, Ramirez and Poblano, may have other plans.

Explaining why a video camera seems to accompany SMART on every rescue, Officer Hoan Dinh explained, "We are trailblazing in a sense because this is not done anywhere else." A lot of stuff we are doing needs to be documented so we can look back and reflect, then improve on it."  Yet, there are long-established animal-rescue teams all over the country that perform the same difficult and dangerous rescue tasks.

Navarrete told NBC, "The fire department is very helpful; however, they are there for the human rescue, so if you call for an animal rescue and they have a human emergency, you're not going to get the help right away or at all, so I decided we have to be self-sufficient."

The concern is why GM Brenda Barnette is ignoring known problems involving the leadership of SMART -- setting up non-profit organizations using the same or similar names as used by LA City and LA Animal Services -- an act for which other employees have received severe disciplinary action based merely on allegations.

And, is she ignoring LA Superior Court documents regarding Annette Ramirez (below)?

THE SMART TEAM SEPARATES ITSELF FROM ANIMAL SERVICES' FIELD OFFICERS

The SMART team is usually responding to the request of an owner and the films are often used to entice media attention, but this creates the need for an extra officer in a department that has far less than its complement. The NBC "Superman" coverage showed their video of a recent capture of a cat that had climbed a palm tree in Echo Park the day before. The rescue was unsuccessful with three officers, so they returned the following day with a full contingent of six members -- for one cat.

Navarrete also told NBC that he "helped launch SMART with the goal of providing animal-only services that weren't offered by the LA Animal Services or other agencies." However, animal-only services (with assistance to humans needing it) are what is offered by every LAAS officer and why taxpayers are investing $41.2 million this year in its budget.

SMART VIDEO - AN ANIMAL SERVICES FILM OR OUTSIDE VENTURE?

Brenda Barnette endorsed the highly advertised SMART video, available on Amazon, which received mixed ratings, mainly due to the repeated profanity by team leader Armando Navarrete, who also discusses having felt a desire since childhood to stick his finger into an electric plug or (during a rescue) to touch live electrical wires to see how it feels .

Navarrete is not new to filming. Apparently, it has been his passion since his early years with LA Animal Services, when several ACO's state they were invited to watch films he made of his off-duty activities. His hobby has grown to the production of the SMART video, which contains an inordinate amount of embarrassingly intimate details of the relationship between Navarrete and Annette Ramirez, showing them living together (unmarried) with her children.

I would have given this four or perhaps even five stars if it wasn't for the rather unnecessary foul language used by Armando. I was thinking this would be a really fun and informative program for children to watch, but even when I was watching it by myself, I had to turn it off halfway through because I couldn't stand to hear one more f-bomb. Too bad the producers didn't think to bleep the language out.

Although this claims to be an LA Animal Services' film, there is no indication how the commercial offering on Amazon is shared by the City. One full-page ad states that, "SMART has partnered with Gathr to make hosting a screening in your city easier than ever." The price for a public or educational screening is $150.

The rescues by SMART are apparently filmed while on the clock or else these Civil Service employees would not be covered for liability or the use of City property. But, there is no indication how any of this money is going into the City funds. Is Officer Navarrete donating his time to this, with no royalties from the sales or showings? This needs to be clearly explained by Brenda Barnette.

In the NBC interview, Navarrete whined that, the team isn't getting its share of the budget from Animal Services.

He explained that, SMART is made up of animal control officers who receive additional training in large animal rescue, swift water rescue, and rope rescue operations to ensure they are fully prepared for any situation that may arise.

"They rely heavily on donations and, at times, pay out-of-pocket for necessary equipment, said reporter Sydney Kalich, sympathetic to Navarrete's statement that he had "recently purchased two kayaks for the rescue team because he needed them immediately and knew going through Animal Services for funding could take weeks." It is fairly certain that Navarrete was reimbursed for any such expenditure, judging from LAAS financial records received recently through a CA Public Records Act request.

Thousands of dollars have been spent on the SMART team training, and training for trainers -- most out of the taxpayer-funded budget and, also, a generous amount from the Animal Welfare Trust Fund, according to the official records.

At an October 14, 2014 meeting of the Animal Services Commission, the SMART Team was granted three Rescue Vehicle 'wraps,' to "turn their vehicles into moving billboards; two Gators ($20,400 each), four-wheeled all-terrain vehicles with two trailers.

Soon after that, records show that they purchased a boat at City expense. In April 12, 2016, the SMART team received a brand-new E-450 walk-in van, made-to-order, as designed by ACO Ernesto Poblano of SMART, at a cost to the City of $76,753.55. This replaced their then-current van, which had a total mileage of only 50,693. The Dept of Animal Services budget then paid for the wrap of the entire vehicle with photos of the SMART team in action.

At the same time, animal control officer staff were driving 2001- 003 animal-collection trucks that were literally stopping in the streets, doors flying open, brakes failing and with no A/C for the animals. (See: Memo to GM Barnette and LA Council: LA Animal Control Officers are at Risk.)

Officer Hoang Dinh was assigned to replace Gregory Randall in Sept. 2014. Randall was the well-liked and very responsive long-time Wildlife Specialist at LA Animal Services, who kept meticulous records on such serious issues as coyote sightings throughout the City.

Randall would go to homes that had repeated incidents involving coyotes or other wildlife intrusions to help alarmed residents explore alternatives such as wildlife-proofing yards and keeping their pets safe. He also attended Neighborhood Council and HOA meetings in the evenings to respond to questions and discuss community concerns.

The Wildlife Section was transferred to the supervision of Armando Navarrete as part of the SMART unit. Randall protested, claiming harassment by Navarrete. His coyote and other wildlife records disappeared -- no longer available on public request. Gregory Randall was suddenly gone from the Department.

Soon the close cooperation between LA Animal Services and the CA Department of Fish and Wildlife in setting up community volunteer groups to monitor wildlife dissipated. Concerned members of threatened communities stopped attending the disappointing events scheduled by Officer Dinh, who showed minimal knowledge about wildlife.

It is rare for a City employee to be fired, especially a 28-year veteran who claims his prior performance records were always good. Randall had discussed with friends that, after his retirement, he intended to continue working with wildlife. However, he did not get that chance.

There was speculation that Brenda Barnette did not want the public to actually know the dangers and/or prevalence of wild predators. Is there more to Officer Randall's firing than Barnette wants known?

A LOOK AT PUBLIC DOCUMENTS ON OUTSIDE ACTIVITIES

The following California Secretary of State Articles of Incorporation and Statements of Information (actual forms) were presented to the LA Animal Services Commission and GM Brenda Barnette on February 14, 2018, showing that three animal control officers (Annette Ramirez, Ernesto Polano and Byron Criddle) had filed a 501c3 Non-Profit, using the same name used for with the City: Animal Rescue Team LA. Ramirez and Poblano are also on the SMART team. (Since then, the videos and offers to help animals outside the City and acceptance of donations have been removed from Google; however, permanent copies are on file and on film.)

IN CARE OF NAME - Ernesto Poblano

AND A NEW ADDRESS WITH A NEW BUSINESS ADDED:

(Statement of Officer not yet filed.)

THE FOLLOWING IS AVAILABLE ON UNICOURT:

Proof of Service - Mail; Filed by Other

DSU - Notice Regarding Payment of Support FL632 (Substitution of Payee); Filed by Attorney for CSSD

Declaration - Income and Expense (- On Behalf of: Respondent: Ramirez, Annette); Filed by Respondent

Miscellaneous (Response to rq for DVRO - On Behalf of: Respondent: Ramirez, Annette; Filed by Respondent

Declaration - Service of Prelim & Final Dec of Disclosure (- On Behalf of: Respondent: Ramirez, Annette - Filed and Entered on 2016-09-26); Filed by Respondent

Appearance, Stipulations and Waivers (- On Behalf of: Petitioner: Clegg, Clarence); Filed by Petitioner

Declaration - Service of Prelim & Final Dec of Disclosure (- On Behalf of: Petitioner: Clegg, Clarence - Filed and Entered on 2016-09-26); Filed by Petitioner

In California, domestic violence is defined as abuse of:

California Penal Code 29825 makes it a crime to possess or purchase a firearm if you are subject to a protective order that bars you from possessing a gun.

A "protective order" is one that:

two types of orders. For purposes of California restrictions on gun possession, it does not matter whether the protective order was ex parte, after notice and hearing, or as part of a judgment.

Is LA Animal Services properly supervising and disciplining its officers? Or is there a double standard for conduct if you are a member of the SMART Team?