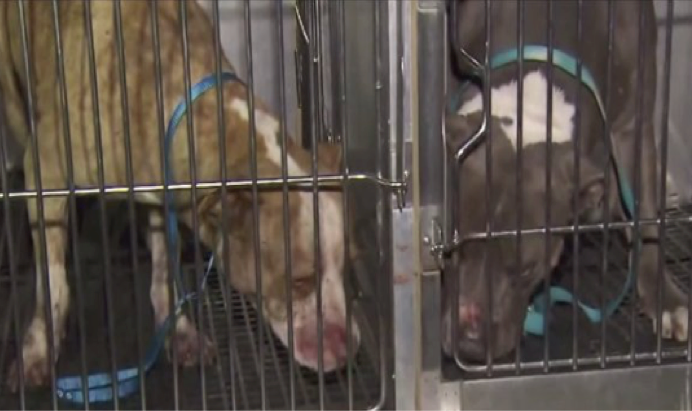 ANIMAL WATCH-At the March 14 LA Animal Services Commission meeting, Brenda Barnette included in her GM Oral Report a short but very precise and lucid overview of the Animal Services’ widely publicized hearing held on March 1. This was the inquiry to determine whether two Pit Bull that killed a tiny Pomeranian and then inflicted injuries which may have resulted in, or contributed to, the death of the dog’s owner, Valentin Herrera, 76, should be declared “Dangerous Animals.”

Barnette concluded with a clear and succinct statement: “Those dogs have been humanely euthanized.”

She later told a CBS reporter that she may have been confused and claims she “misspoke.” However, Barnette was voluntarily summarizing one single event---not discussing a number of cases or under stress that might have muddied her memory.

None of the Commissioners has experience in animal control, but they are thoroughly familiar with LA Municipal Code SEC. 53.18.5.  HEARING PROCEDURES AND LICENSE REVOCATIONS, since, with Commissioner Larry Gross presiding, they serve as the Appeals Board in Dangerous Animal and Barking Dog hearings and review these cases regularly. In fact, they had heard four such appeals that morning.

But, with three attorneys present, not one asked about the euthanasia of the Pit Bulls prior to an appeal period. GM Barnette’s statement was delivered so unequivocally that no one raised the basic question to determine the right of LAAS to euthanize: “Did the owner relinquish the dogs?”

On Monday, March 20, after my CityWatch article appeared, LA Killer Pit Bulls Euthanized…Are Dog Attacks Now an Epidemic?, which quoted Barnette’s statement, I received numerous communications from reliable sources that the Pit Bulls in the Lincoln Heights attack were very much alive and being held at North Central Animal Shelter awaiting the end of the owner’s appeal period on March 22.

At 10:30 a.m. on Tuesday, March 21, I electronically submitted a California Public Records Act Request (CPRA) to Commission President David Zaft and GM Brenda Barnette, asking for the records in their database regarding the status of these dogs.

Very promptly, at 2:20 p.m. I received all requested material, and a surprise! An entry by a shelter supervisor at approximately 3:45 p.m. on March 20, states:

“Administration has notified me that (Redacted name) is appealing DA 171117 NC and the determination that her dogs are “dangerous” (A1679513 AND A1679514). These dogs are to be held until the appeal is decided.

How could Brenda Barnette, who has more than six years as General Manager at one of the largest animal-control agencies in the U.S. and is the person who signs the decisions made at all Dangerous Animal hearings, forget there is an appeal period before allegedly dangerous dogs can be euthanized under law?

Also, there were two Assistant General Managers, Louis Dedeaux and Dana Brown, in the room at that time. Either could have slipped a note to their boss or whispered in her ear that she “misspoke.”  (Asst. GM Louis Dedeaux has over 25 years in field and shelter experience at LA Animal Services and is the person who approves ALL animal euthanasias in City shelters.) Since neither of them corrected her, there was no reason for anyone present or those listening to the "On Air" broadcast to doubt Barnette’s word.

Here’s a little more information garnered from the Kennel Impound Cards: The two Pit Bulls involved in the February 2 attack on Mr. Herrera and his dog are named, “Rocky” (60 lbs.) and “Blue,” (83 lbs.) Both have a DOB of 02/03/2015. Neither is neutered or microchipped. There is no indication of dog licenses. Their physical condition does not indicate any negative findings but the description for each under OBJECTIVE FINDINGS, reads, “Patient will not allow full examination – SCARED.” A note for Rocky’s skin condition states: “MUZZLE SOILED W/BLOOD O/W OK.”

When CBS spoke to the grandson of the victim, Valentin Herrera, he was upset that the owner is requesting return of these dogs. However, an expert opined that it is possible the decision to appeal has as much to do with limiting potential civil liability. Simply allowing the dogs to be euthanized could be interpreted as an admission that they are dangerous, he said. The owner may believe there is a possibility of overturning the ruling by the LAAS Hearing Examiner, either on an appeal to the Commission or by filing an action in Superior Court.

If the owner prevails, it could mean the dogs will be released to her and returned to the Lincoln Heights location or merely moved to a location outside the city limits.

THIS IS NOT THE FIRST TIME GM BARNETTE HAS “MISSPOKEN.”

Brenda Barnette -- who had no animal control or law-enforcement experience when she was appointed to be LA City’s “Top Dog” by former Mayor Antonio Villaraigosa -- has “misspoken” or “misinformed” on numerous occasions, with very costly results to taxpayers, animals and LAAS employees.

Here are just a few of the published examples:

SHOULD “MISMANAGEMENT” BE EXCUSED?

Barnette’s annual salary is now over $230,000 (Comparatively, Governor Jerry Brown makes $190,100, and the Assembly Speaker and Senate President pro tem are each paid $119,734, according to the LA Times.)

Shouldn’t we expect that she would not “misspeak” or “misinform” (without correction) on a matter as serious as Pit Bulls that are alleged to have killed a man and his dog?

Should the Commission (or anyone else) believe her on other issues -- including her insistence that Los Angeles is almost “No Kill,” although streets in many areas are rife with stray dogs and cats and thousands of homeless animals are merely being transported to other cities/states or “fostered” without a permanent home?

After more than six years, shouldn’t Barnette be expected to know the basic elements that are a regular part of her job?

Barnette’s “mismanagement” has systematically devastated a vital public safety department and endangered her staff, the public and animals; but there have been no consequences.

Is that because Barnette is automatically excused from “misspeaking” or “misinforming?” Or, is it because the political leadership of Los Angeles does not want to bring attention to its own rampant systemic manipulation of the truth?